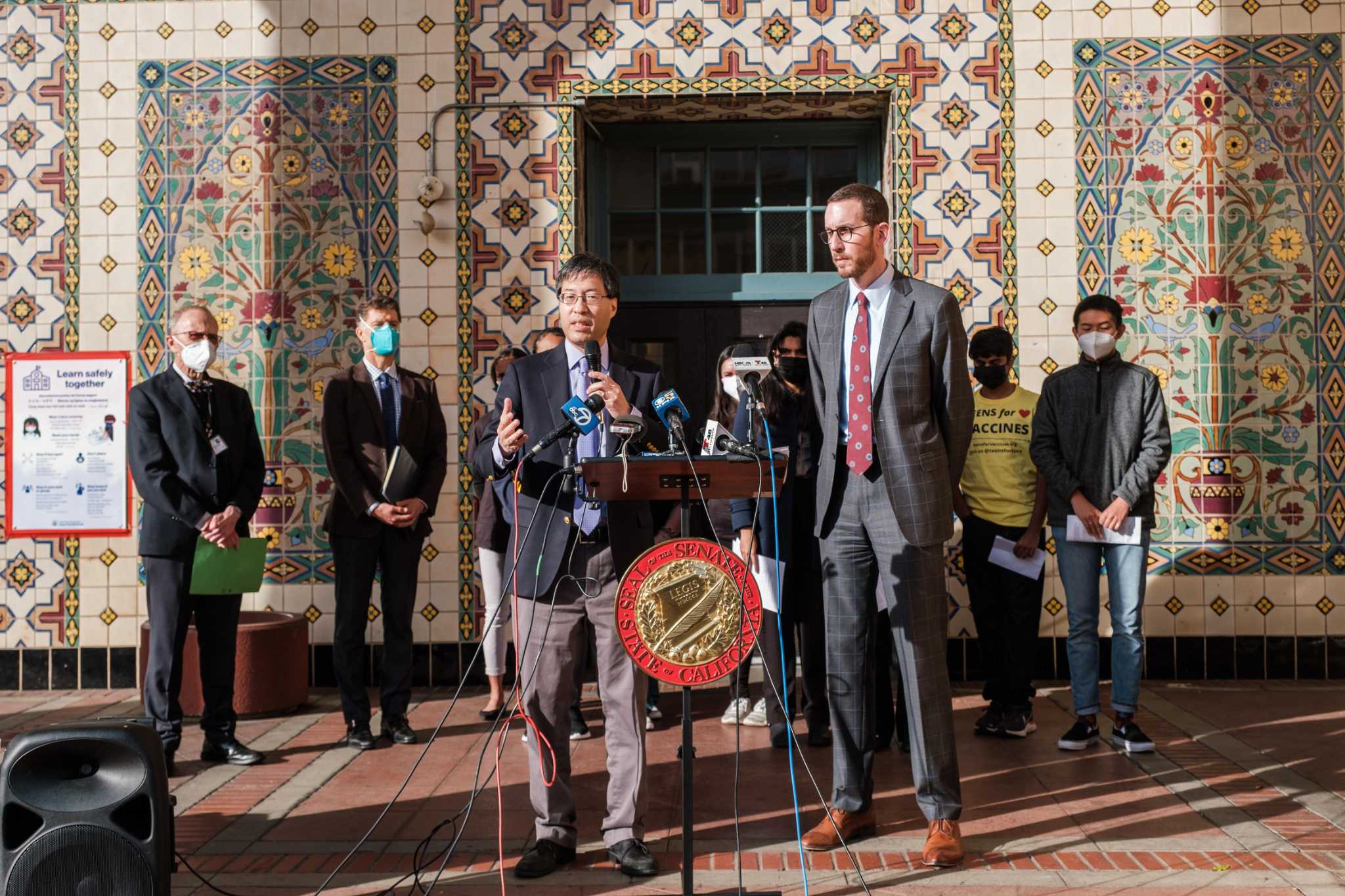 SACRAMENTO — When it comes to passing legislation to mandate or urge more people to get COVID-19 vaccines, there seems to be a common refrain at the California Capitol: Maybe next year.

Lawmakers still have months left in their 2021 session, but an ambitious slate of vaccine bills proposed by Democrats is on life support. Its two cornerstone bills — one to require employers to vaccinate their workers and another to require the shot for school children regardless of whether their parents object — have been dropped.

Legislators who sponsored the bills said while each of those measures faced unique setbacks, the situation also speaks to the dwindling appetite, both among some lawmakers and the public at large, for debating coronavirus rules.

It’s a dramatic shift from just a few months ago, when legislators rolled out a half-dozen major vaccine bills and Gov. Gavin Newsom boasted that California would be the first state to require the COVID vaccine in schools. At the time, lawmakers braced for what they expected would be a flood of raucous, anti-vaccine protests in Sacramento.

Assembly Member Buffy Wicks, D-Oakland, who carried the bill to require vaccines for employees, said part of the changing sentiment has been a sense of pandemic fatigue after 2.5 years of living with the virus.

She said lawmakers and voters alike also want to focus on other existential challenges facing the state, such as the housing crisis and safeguarding access to abortion. Wicks said public interest in COVID safety measures seemed to wane after a winter surge in cases due to the omicron variant subsided, though cases are now climbing again.

“People are just ready to move on to sort of normalcy,” she said. “We still have other things that we need to address.”

That said, Wicks and other lawmakers who are part of the Legislature’s Vaccine Work Group have stressed that several of other key measures are still moving forward, including a bill to make it easier to discipline doctors who spread incorrect claims about vaccines and another to require health providers to submit all student vaccine records to the state’s confidential registry.

But the fierce headwinds still facing vaccine bills in Sacramento were apparent this week as the most high-profile bill remaining squeaked through a floor vote in the Senate.

On Thursday, the Senate voted 21-8 to approve SB866, which would allow teenagers get the COVID vaccine and other FDA-approved vaccines without parental approval, Sen. Scott Wiener, D-San Francisco, carried the bill and sparred with Republican legislators, who argued it would trample on parent rights. He said it would give teens whose parents believe vaccine conspiracy theories the chance to “protect their own health.”

GOP opposition was expected, but the vote nearly failed because of Democrats. It passed by one vote in the 40-member Senate, where at least 21 senators are needed for a majority. Two Democrats voted in opposition while a half-dozen others quietly abstained. Now, the bill likely faces an even tougher path in the Assembly.

Sen. Melissa Hurtado, D-Sanger (Fresno County), voted against the bill. She said many legislators, while they support efforts to increase immunizations, worry that passing aggressive vaccine mandates could exacerbate political polarization and fuel unfounded fears about the shot.

“The large picture is that our democracy is very fragile right now,” Hurtado said. “Part of misinformation is about putting fear into people. That’s the last thing I want to do is scare parents.”

She said the Legislature should instead focus on increasing access to the vaccine and educating people about its effectiveness. Concerns about low vaccination rates among children played a key role in derailing SB871, the bill that would have required all K-12 students to get vaccinated for COVID by eliminating the state’s existing personal belief exemption.

Sen. Richard Pan, D-Sacramento, the author of the bill, said it was shelved because because the rate of children receiving the shot remains low — only about 35% of children ages 5 to 11 have been fully vaccinated, according to state data.

The measure would have closed a loophole in the Newsom’s school vaccine mandate, which his administration has delayed implementing until at least July 1, 2023, that would allow parents to exempt their children if they object to the vaccine due to their religious or political beliefs.

Crystal Strait, board chair of ProtectUS, an advocacy group that promotes vaccines, said she agrees that low vaccination rates made the bill infeasible. She said the focus should be on fighting disinformation about the vaccine and expanding access, nothing that many pediatricians still aren’t able to distribute the vaccine.

“Right now, it makes more sense to concentrate on these issues,” Strait said. “We have to acknowledge COVID fatigue. People want this to pass”

Pan, a pediatrician, agreed rampant disinformation about vaccines that has spread on social media and been echoed by some high-profile Republican leaders has played a role. He said legislators are also tired of being harassed by protesters and inundated with nasty phone calls.

“The disappointment is really about how we’ve allowed the extremists to try to take over the conversation,” Pan said. “That does have an effect. It’s just tiring to have to put up with it all the time, even when you know they’re wrong.”

But some opponents of the vaccine mandate bills proposed this year haven’t come from the anti-vaccine movement. The opposition has included more mainstream groups, who say the bills were just impractical.

Megan Bacigalupi, an Oakland mother and executive director of CA Parent Power, an education advocacy group, said many parents have questioned the necessity of vaccine mandates because either their children already had COVID and recovered or they’ve been vaccinated themselves and still got infected. She said the rapid spread of the omicron variant, which infected countless vaccinated people, killed the notion that vaccines could stop transmission.

“The appetite for this is just not where we were even six months ago,” she said. “Many of us have been trying to normalize this idea that you can be pro-vaccine but anti-mandate.”

Opposition to some COVID measures has also been fervent among some labor unions, particularly those representing public-safety workers. Unions representing firefighters and prison guards played a key role in derailing AB1993, the bill that would have required employers to verify that their workers and contractors are immunized.

Wicks, the legislator who carried the employer-mandate bill, said she’s debating whether to reintroduce the measure next year. She considered proposing a similar measure in 2021, but held back as time ran out in the final weeks of session.

“I’ll be honest, it was disappointing and frustrating,” Wicks said of opposition to AB1993 this year. “We can’t forget that this is a disease that is still killing people. Those are preventable deaths, absolutely preventable deaths.”

Christina Hildebrand, an activist who founded the group A Voice for Choice Advocacy, said because the COVID vaccine bills would have affected nearly everyone who works or has children, the measures drew more people into the debate over “medical freedom.”

Before the pandemic, the fight over vaccine bills was often focused on tightening rules for shots that children must receive to attend K-12 schools. That impacted the small percentage of families who objected.

“It’s more of an open conversation,” Hildebrand said of the debate around mandates today. “You name it, there were people against these bills. It was a huge, diverse group of people, and many Democratic organizations.”

Meanwhile, the United States hit a grim milestone this week as the CDC announced nearly 1 million people have died from the coronavirus. Public health officials say that while some vaccinated people are still getting infected with the virus, they are less likely to catch it and far less likely to become seriously ill or die.

Pan, who is termed out at the end of this year, said he fears legislators might have missed a chance to prepare for future waves of the virus by increasing vaccination rates.

“The question is how many people are we willing to allow to be disabled or die before we say, ‘Enough is enough?’” Pan asked.