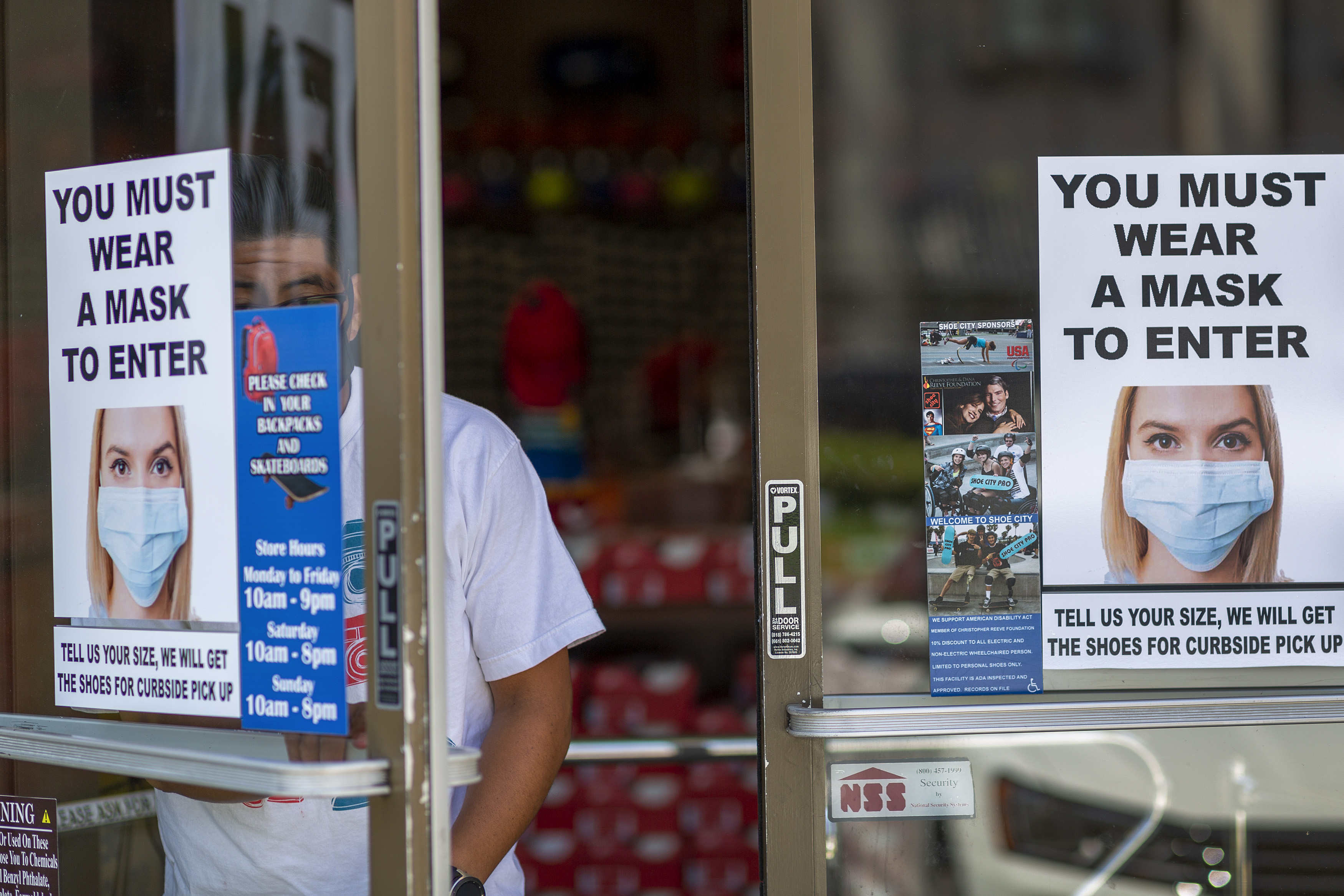 A man exits a shoe store where masks are required for entry on May 27, 2020 in Glendale, Calif. | David McNew/Getty Images

Los Angeles County backed off Thursday from reinstating a universal indoor masking mandate as the latest wave of Covid-19 begins to flatten and new hospitalizations start to decline, putting off the resumption of an unpopular policy.

The most populous county in the U.S. had been poised to start requiring masks in most public settings Friday for the first time since March because of the rapid spread of the highly contagious Omicron subvariant BA.5. But health officials said the latest numbers, according to the county’s own calculations, did not support remasking.

Health officials had planned to reinstate indoor masking requirements once the county moved into the high Covid-19 community level as defined by the U.S. Centers for Disease Control and Prevention, which it did on July 14, and then stayed there for two consecutive weeks. That threshold included high community transmission, plus at least 10 new Covid hospital admissions for every 100,000 residents.

“The clock is stopped in the moment,” L.A. County Public Health Director Barbara Ferrer said at a press briefing, noting a “fairly steady decline in cases since July 23.”

Since the CDC’s latest hospitalization numbers for the county only covered the seven-day period ending July 25, Ferrer said the county ran its own numbers, which covered the seven days ending July 27. Those numbers showed a decrease in both the hospital admission rate and the percent of beds used by Covid-19-positive patients. If those trends are confirmed and continued, Ferrer said, that could move the county from the CDC’s high to the medium transmission level.

“We’re feeling pretty confident we should be in that medium community next Thursday,” Ferrer said. “But should things change, we will revisit this decision, obviously.”

Ferrer had started to telegraph the possibility of holding off on the mask requirement both during last week’s press briefing and at Tuesday’s Board of Supervisors meeting.

She told reporters Thursday that she heard from many people on both sides of the debate, but insisted her decision was based on the data. “It would be a little bit ridiculous to go ahead tomorrow and implement universal indoor masking if I know a few days from now we would be moved back to medium,” she said.

Andrew Noymer, associate professor of public health at UC Irvine, said Ferrer was in difficult position. “In some ways, strong recommendations are better than mandates,” said Noymer, who supported the indoor masking requirement. “If you bring down a mandate and then nobody does it, your mandate becomes a joke. What does that mean for you going forward?”

The potential of returning to masking has faced strong opposition from many business owners, lawmakers and residents who’ve cited Covid vaccinations and treatments that have kept hospitals from being overrun as a sign the pandemic has evolved. People have grown weary of the types of restrictions imposed early in the public health crisis, regardless of rising cases and positivity rates.

These divergent have been on recent display among county supervisors. L.A. County Supervisor Kathryn Barger called mask mandates “polarizing” and “unenforceable” in an open letter, while Supervisor Sheila Kuehl referred to those who find masking oppressive as “snowflake weepies.”

Long Beach and Pasadena, cities in the county that operate their own health departments, had said they would comply with state guidance recommending masks rather than follow L.A. County’s rules. Some cities, including Beverly Hills and El Segundo, had vowed not to enforce a mandate if imposed by the county.

While many parts of the state and the country have high community transmission levels, Los Angeles County remained an outlier in its plan to revise its mask mandate.

On a smaller scale, some universities, including UCLA and UC Irvine, have reimposed indoor mask mandates. The San Diego Unified School District brought back its indoor mask mandate on July 18, at least for the rest of the summer session.

The only major jurisdiction in California to reinstate indoor facial covering requirements after lifting the rules earlier this year was Alameda County. Alameda County Public Health Director Nicholas Moss took the action in June even though nearby counties, including San Francisco and Santa Clara, had higher case rates. It was dropped three weeks due to improved case rates.