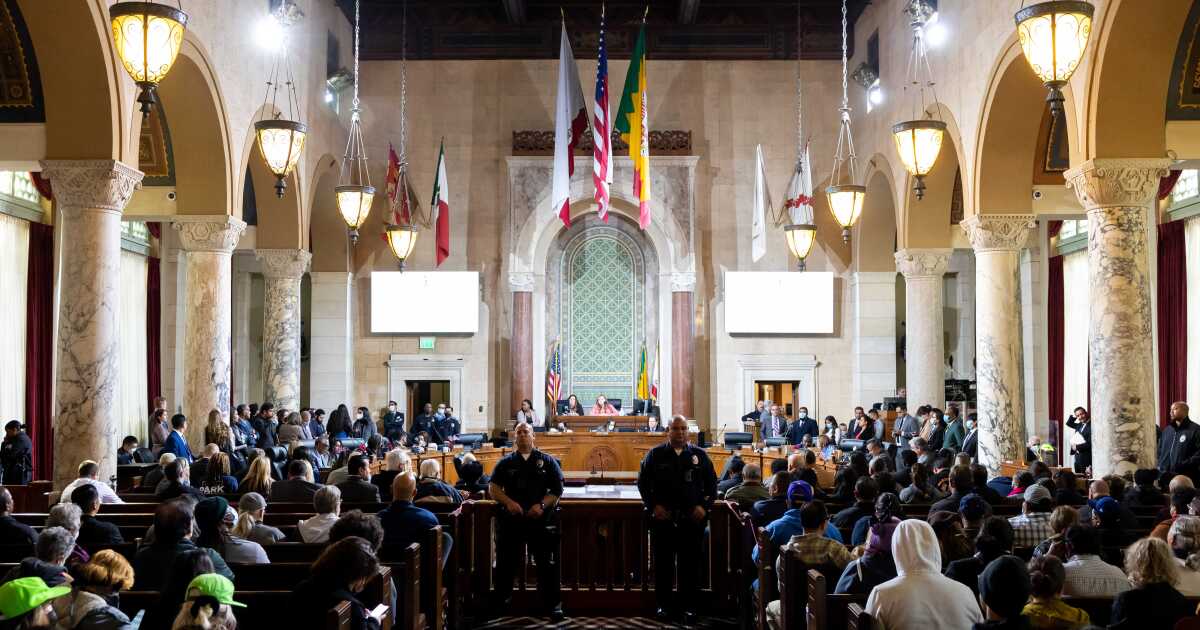 Start your day with LAist

Sign up for How To LA, delivered weekday mornings.

The vote came less than two weeks ahead of a looming deadline: The city’s COVID-19 eviction protections are set to expire after Jan. 31.

Councilmember and housing committee chair Nithya Raman said the protections advanced by the council on Friday “will be a big change for the city of L.A. in terms of expanding tenant protections. It’s something that I think we can all be proud of.”

The votes on the package of proposals came after a lengthy public comment period that saw dozens of tenants advocating for eviction safeguards moving forward, as well as landlords urging the city to remove pandemic protections without creating new tenant rights.

California Apartment Association spokesperson Fred Sutton wrote a statement of opposition to the council, calling for an end to all emergency measures for rental housing.

The council approved an expansion of “just cause” eviction protections to households where landlords can, under normal circumstances, evict tenants without stating a reason.

The just cause expansion means landlords will not be able remove tenants without stating a justified reason for eviction. Some of the approved reasons landlords could cite to evict a tenant include:

The expansion would apply to nearly 400,000 households that currently lack local just cause protections. About 650,000 households in the city already have just cause protections because they live in buildings constructed before 1978 and therefore fall under the city’s rent control system, which has long provided these rights.
Under the new rules, landlords seeking to evict tenants who’ve done nothing wrong would have to pay relocation assistance.

During Friday’s meeting, some councilmembers pushed for delayed implementation of the new protections. They wanted eviction restrictions to kick in only after the expiration of a tenant’s first lease. Councilmember Bob Blumenfield gave the example of actors or traveling nurses potentially struggling to remove tenants after renting out their homes while working out of town for a few months.

But other councilmembers worried that any delay in protections could leave thousands of renters vulnerable to arbitrary evictions. Anna Ortega with the city’s housing department said enforcing different rules for rent-controlled and non-rent-controlled tenants would be confusing.

“This proposal would somewhat create a two-tiered system that would seem unfair to tenants, merely because of how old the building they live in is,” Ortega said.

Ultimately, councilmembers voted for the expanded just cause protections to kick in after the end of a tenant’s first lease, or six months after a tenant moves in — whichever comes first.

A New Threshold For Eviction Over Late Rent

With COVID-19 eviction rules going away at the end of the month, the biggest change coming next month is that tenants will owe their February rent in full by the first of the month or risk eviction. Hardships related to COVID-19 will no longer allow tenants to delay their rent payments to a later date.

But tenants who fall short next month may not be evicted right away.

The city council voted Friday to create a new threshold for non-payment of rent. Under that protection, tenants in the city would be allowed to fall behind by about one month’s worth of rent before a landlord could pursue an eviction over non-payment.

Specifically, L.A. tenants would have to owe more than one month’s worth of “fair market rent,” as determined by the U.S. Department of Housing and Urban Development, before landlords could file an eviction. In the L.A. area, that would mean landlords couldn’t evict tenants until they owe back rent exceeding these amounts:

Tenant advocates said this protection will ensure that renters aren’t evicted and potentially made homeless after falling behind by a few hundred dollars, and would provide renters more leeway to seek unemployment benefits or other assistance that can take time to obtain.

This policy mirrors a similar protection for tenants in unincorporated parts of L.A. County passed by the County Board of Supervisors last year.

Rent hikes remain banned in the city’s rent-controlled housing until February of 2024. But rent increases are allowed in other units.

State law limits rent hikes to 10% in rental housing built more than 15 years ago — but there’s no limit on rent hikes for tenants in newer buildings. However, Friday the city council passed a provision to assist tenants who can’t afford huge rent increases.

Under the new protection, any landlord who forces a tenant to move due to a rent hike of more than 10% would have to pay the tenant three months of fair market rent (see the bullet points above), plus $1,411 in moving expenses. This relocation assistance would be meant to compensate tenants for “economic displacement.”

More Time For New Pets And Roommates To Stay

Throughout the pandemic, the city has implemented rules against eviction for tenants who brought in new roommates or pets.

Roommates and pandemic pets not authorized by landlords will be allowed to remain in place for another year. The council approved an extension until Jan. 30, 2024.

Housing researchers credit the nearly three years of COVID-19 protections with reducing homelessness. Eviction protections coupled with other tenant aid likely reduced the growth in L.A. County homelessness by 43% during the pandemic, according to one recent study.

According to The National Equity Atlas, a partnership between researchers with USC and PolicyLink, about 226,000 households remain behind on rent across the L.A. area. They’re in debt to the tune of nearly $845 million, and almost 250,000 children live in L.A. households that aren’t caught up on rent.

What questions do you have about housing in Southern California?