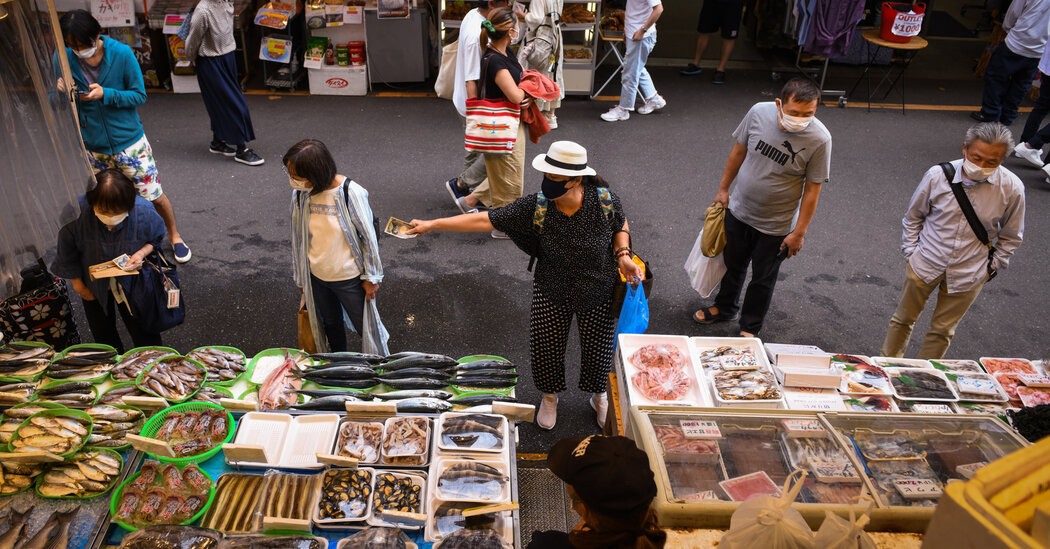 The economy contracted 1.2 percent as consumers and businesses were hit with rising import prices.

The economy contracted at an annualized rate of 1.2 percent during the third quarter, government data showed on Tuesday, ending nine months of growth and setting back the country’s recovery just as Japan was adjusting to life with looser coronavirus restrictions.

Analysts had predicted a modest expansion, after Japan’s economy had jumped 4.6 percent — revised up from an initial reading of 2.2 percent — in the previous three-month period, returning it to its prepandemic size.

But the results were weighed down by import prices that have surged as the yen has plumbed its lowest levels against the dollar since 1990, a result of Japan’s decision to keep interest rates ultralow even as the United States raises them to combat inflation.

Tuesday’s reading also showed the headwinds that Japan still faces from a global economy that is slowing even more than forecast because of Russia’s war in Ukraine, as well as from domestic inflation that is the highest in decades by some measures. An Omicron-fueled surge in infections over the summer also dampened an acceleration in Japan’s consumer spending that began earlier in the year.

Still, the negative results may be short-lived. Shinichiro Kobayashi, a principal economist at Mitsubishi UFJ Research & Consulting, said that the surprise reading was largely related to a rapid increase in prices for imported services, among them advertising, and that Japan’s economy was likely to return to growth in the next quarter.

For Saisuke Sakai, the chief economist at Mizuho Research & Technologies, there were also some positive signs in the data. Even as coronavirus infections spiked to record highs in August, domestic spending had held up better than during previous waves, a sign that the country was adapting to life with the virus, he said.

But while Covid-19’s domestic impact has shrunk, other economic challenges have grown. After decades without significant price increases, Japanese companies and households are having to reckon with inflation caused by the breakdown of global supply chains and rising food and energy costs caused by the Ukraine war. The price rises, which were around 3 percent year over year in September, are low compared with those in many other countries, but they have come as a shock to Japan, which has long been accustomed to price stability.

Adding to the pressure, the yen, like other Asian currencies, has fallen dramatically against the dollar over the last year, compelling the Japanese authorities to intervene in currency markets in an effort to shore up its value.

Economists say the fall can be attributed to the Bank of Japan’s decision to keep interest rates low. The difference in rates that has opened as the United States has repeatedly raised its own, experts say, has driven a sell-off of the yen as investors pile into the dollar in search of higher returns.

The cheap yen has had some benefits for Japanese exporters, whose products are less expensive for customers abroad, as well as for other Japanese companies with large overseas earnings and investments.

But the pluses seem to have been outweighed by the stress put on domestic markets as businesses and consumers alike have had to pay more for imports, whether raw materials or finished goods.

The yen’s weakness has created record trade deficits for Japan. The value of imports surged nearly 45 percent in the first half of the fiscal year, between April and September, as the price of fuel skyrocketed. Exports, by contrast, rose just under 20 percent.

Still, Stefan Angrick, a senior economist at Moody’s Analytics, described the trade side of Tuesday’s result as “counterintuitively good news,” writing in a report that “the pickup in imports in the third quarter reflects the fact that Japan’s belated Covid-19 recovery is gaining traction as businesses and households return to spend.”

Looking ahead, the picture is mixed. Despite the weak yen, demand from abroad could well weaken in the face of China’s continuing “zero Covid” policies and a global economic slowdown exacerbated by interest rate increases by central banks trying to keep up with the Federal Reserve.

On the other hand, Japan’s ongoing adjustment to pandemic life, its reopening in October to tourism and a large government stimulus package meant to offset the effects of inflation are all likely to contribute to a modest continued recovery in domestic consumption, which remains well below prepandemic levels, said Mr. Kobayashi of Mitsubishi UFJ. Business investment also looks set to continue growing as Japan pushes forward efforts to digitize its economy.

All told, Mr. Kobayashi said, that means that, despite the unexpected setback this quarter, “it’s already certain that we will return to positive growth” during the next three-month period.