The Perfect Enemy | Is the Iowa Legislature repeatedly passing bills unpopular in the state? An examination - PolitiFact
Skip to content
May 26, 2022
Read Time:10 Minute 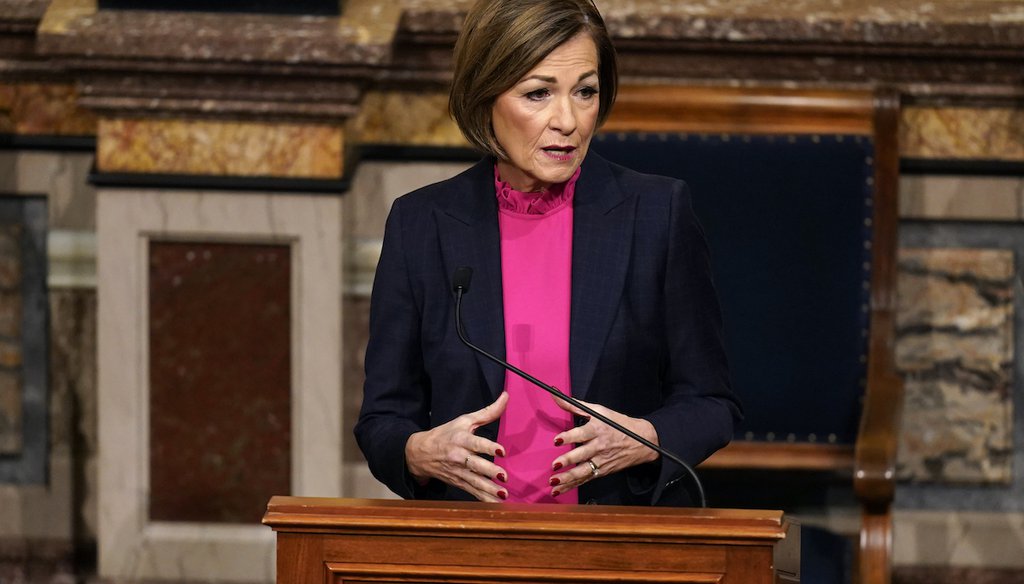 The Iowa Legislature’s 2022 session dragged into mid-May with a stumbling block: a school voucher bill that Republican Gov. Kim Reynolds proposed to what usually has been the receptive, Republican-led House and Senate.

The voucher bill, in the Students First Act, would create 10,000 vouchers — enough for 2% of Iowa’s K-12 students — that parents could use to transfer their children from a local public school to a private school of their choice. The Senate passed the bill with only one Republican dissenter to join unanimous Democrat dissent in March, but the House vote has been delayed while Republicans hammer out differences in their caucus.

Meanwhile, their opponents complain in places on social media that Republicans have forged a grip so strong on Iowa state politics that they can pass bills that are unpopular with the public. Why the claim?

Part of the answer to that question is in a Des Moines Register/Mediacom Iowa Poll, released near the end of March 2021, that showed 49% of Iowans opposed using state money otherwise intended for public schools to pay for students in private schooling, while 44% favor it. Another 7% were not sure, Selzer & Co., which conducts the Iowa Poll, reported.

The poll of 775 Iowa adults was conducted March 7-10, 2021, and had a margin of error of plus or minus 3.5 percentage points. It showed 33% of Democrats favoring and 60% opposing the voucher plan. Republicans came close to mirroring the overall results — 49% in favor and 43% opposed— while 48% of independents favored and 47% opposed the plan.

Poll comparisons indicated that Republicans had been successful convincing some Democrat and independent Iowan voters to join their cause.

A similar poll in 2017 showed 24% of Democrats favored and 71% opposed public funding for private education. Among independents, 37% favored and 57% opposed the idea, the 2017 poll shows.

Overall, 58% of Iowans opposed using state money intended for public school funds to help parents pay private schools to take their children, the 2017 poll showed. The 49% of Republicans who said in 2017 they opposed and 43% said they approved of public funding for school vouchers mirrored what was to come in the 2021 poll for Republicans.

The 2017 poll, taken in early February when Republicans also controlled both legislative chambers and Republican Terry Branstad was governor, had 802 respondents and a margin of error of plus or minus 3.5 percentage points.

Democrats are pushing for a political shift toward them. Part of what fuels their hope is classical political behavior that has shown voters bouncing back toward the political center, and an opposing party’s politics when they have had enough of those in power.

“There’s a concept in polling called thermostatic public opinion, which basically means that public opinion can kind of act like a thermostat,” Christopher Budzisz, an associate professor of politics and director of the Loras College Poll at Loras College in Iowa, said in an interview. As an example, he said, if Republicans “go too conservative compared to where the public is… the public will act as a thermostat to go in the other direction.”

Christopher Wlezien, now a University of Texas political science professor, introduced the thermostatic public opinion model in a 1995 American Journal of Political Science article when he was on the University of Houston faculty. “Democratic accountability requires that the public be reasonably well-informed about policy, that the public adjusts its preferences for ‘more’ or ‘less’ policy activity in response to what policymakers actually do,” Wlezien, who earned his political science doctorate at the University of Iowa, wrote.

Thus, Democrat President Obama’s Affordable Care Act, or Obamacare, passed the Democrat-controlled Congress in 2010 while the majority of Americans told pollsters they opposed it. Republicans then gained control of the House in the 2010 elections.

Kristen Soltis Anderson, a noted Republican pollster, political researcher and commentator, wrote that Obamacare then became more popular when Republicans took power in Congress and threatened to repeal it. But Anderson, a Spring 2022 Fellow at Georgetown University’s Institute of Politics and Public Service also argued this in a January 2021 Washington Examiner article:

“Unfortunately, America’s thermostat may be broken.”

She said that not only people, but institutions in corporate business and higher education moved leftward – lurched, she wrote – in backlash against Donald Trump when he was president. A media that was less neutral grew, she wrote, but as liberals distanced themselves from Trump, conservatives moved farther in the other direction instead of toward the center.

This is big on people’s minds as they wait for the final U.S. Supreme Court ruling in a case whose ruling was leaked to Politico and shows at least five associate justices willing to overturn the landmark ruling making abortion legal in the U.S.: Roe v. Wade. In Iowa, the Republican-led House and Senate voted last year to adopt a state constitutional amendment that says abortion is not a right guaranteed by the Iowa Constitution.

The measure must be approved using the same language in the next General Assembly, in 2023 or 2024 and then be approved by voters by simple majority in 2024 to take effect.

Reynolds has asked the Iowa Supreme Court to overturn its decision in 2018 that said the state constitution protects abortion rights. A ruling is pending.

A Des Moines Register/Mediacom Iowa Poll reported in September 2021 that 57% of Iowans questioned said abortion should be legal in most or all cases, while 38% said abortion should be illegal in most or all cases. The other 5% said they were not sure. The poll, of 805 Iowa adults and conducted Sept. 12-15, 2021, by Selzer & Co., had a margin of error of plus or minus 3.5 percentage points.

PolitiFact recently wrote about polling on abortion, and a murky message about the true feelings of those questioned about the topic. Reasons include views on the topic being intensely personal and often paradoxical, and sometimes contradictory responses because of how the pollster asks a question, a May 5 story showed.

More recently, the well-respected Des Moines Register/Mediacom Iowa Poll, questioned 813 Iowa adults from Feb. 28 to March 2 on several issues being decided in the Republican-held Iowa Statehouse. The poll had a margin of error of plus or minus 3.4 percentage points. Topics it covered included:

A Republican-supported bill listed as unfinished business in the 2022 Iowa General Assembly would prohibit day care, elementary, secondary and post-secondary schools in Iowa from requiring students to have a COVID-19 vaccine. Bill opponents say school children already must be vaccinated for other health threats and that adding COVID-19 should be acceptable.

But, the Iowa Poll showed waning support for school vaccination requirements. The Register reported on March 13 that the poll showed 34% of Iowans saying school children needed to be vaccinated unless they had a doctor’s excuse. In 2015, 59% of Iowans polled had said children should be vaccinated for school.

The 2022 poll showed 21% supporting limited exemptions and 14% supporting broad exemptions for medical or religious reasons. It showed 8% saying Iowa should have no childhood vaccination laws, while 3% were unsure.

Another bill pending Reynolds’ signature would allow child care employees and substitutes who are 16 and 17 years old to work with children without adult supervision. Six Republicans in the House voted with Democrats against the bill but none in the Senate joined Democrats in opposition. The Iowa Poll found that 65% of Iowans questioned opposed such a move, 25% supported it, and 9% were not sure.

The Iowa poll showed 53% opposing the benefit cuts for laid-off workers, 38% in favor and 9% undecided.

Those in the Iowa Poll liked the personal income tax cut, with 54% saying they approved and 38% saying they opposed it. Another 9% said they were not sure. But only 34% of those responding supported the law’s section that reduces corporate income tax rates in phases to a targeted 5.5%. More than one-half – 53% – opposed the new corporate tax plan and 13% were not sure.

Participants in interscholastic sports must compete in boys’ and girls’ sports based on their sex at birth under a law signed March 3. The law is aimed at people who are transexual and want to cross over into the sport for the gender with which they identify.

The poll showed Iowans evenly split on this, with 46% in favor, 45% opposed and 9% unsure.

What this could mean for Republican power in Iowa

The question, then, gets back to whether Republicans in charge of Iowa’s government can do what they want, regardless of public opinion. Busdzisz – whose polling on state issues has drawn attention but who now focuses on local issues where Loras exists, in Dubuque, Iowa – said the jury is out on that question and how long the current Republican hold on power will last.

“I think parties that are in dominant political positions within a structure of government can push things, and they can continue to push it.” Budzisz said. “But I do think there is an equilibrium where that thermostatic model that I mentioned, where essentially the public does at some point react.”

Pointing to Anderson’s thesis on thermostatic politics, he said political decisions can extend far from the center and subsequently the far left, especially with political polarization, before an opposing political side chips away at the power of those in charge.

“These kinds of national trends have not not been as prevalent at the state level,” he said about political polarization in Iowa that mirrors that on the national level. “But I do think it’s increasing to where you will see Iowa Republicans thinking about Iowa Democrats as they do the national Democrats, versus making a distinction between the two. And I think one and the same goes with the Iowa Democrats looking at Iowa Republicans.”