The Perfect Enemy | Is burnout finally ‘high-profile’ enough for leaders to act? - BBC
Skip to content
February 3, 2023
Read Time:8 Minute
Jacinda Ardern is the latest big name to step back from her position due to burnout. Is her decision enough to finally move the needle on workplace mental health?

Last week, Jacinda Ardern announced she would be standing down from office as New Zealand’s Prime Minister. The 42-year-old, whose more than five-year term was marked by her handling of the aftermath of the country’s worst ever mass shooting, a deadly volcanic eruption and the Covid-19 pandemic, said on 19 January that she no longer had enough “in the tank” to do her job justice.

“Politicians are human. We give all that we can, for as long as we can, and then it’s time,” she said. “And for me, it’s time.”

Though Ardern, who also gave birth while in office, didn’t explicitly refer to burnout as the reason for her decision to quit politics, the public and media have widely interpreted her resignation speech as a reference to it.

Many have praised her as one of the first high-profile political leaders to admit to the toll of overwork that comes with the responsibility of running a country – something particularly notable, considering her reputation for remaining unflappable in the face of a tumultuous period in New Zealand’s history. Some have also raised the prospect of Ardern’s candour on the topic representing a turning point, of sorts; a collective re-defining of burnout as something that is a serious ­– even potentially life-threatening – syndrome, and not just a personality trait of gritless millennials, or a lifestyle choice of overachievers.

Now, many people hope her words particularly might be a significant step towards normalising discussing mental health and work: a sign that discussions around burnout can be held without fear or perception of stigma, which in turn would allow employers to establish mechanisms to support employees before it’s too late. Yet not everyone is so optimistic, especially for women.

Burnout is broadly defined as physical and emotional exhaustion, coupled with decreased motivation and lowered performance at work. According to the American Psychological Association (APA), it “results from performing at a high level until stress and tension, especially from extreme and prolonged physical or mental exertion or an overburdening workload, take their toll”. In 2019, the World Health Organization (WHO) included burnout in its International Classification of Diseases and defined it as an “occupational phenomenon” (while also maintaining it is not a medical condition).

Burnout has traditionally been associated with executives in industries like law, consulting and finance, where a culture of presenteeism has historically prevailed, often leading to extraordinarily long hours and overwork. However, it’s increasingly affecting different generational cohorts, especially young people, and is manifesting across an array of sectors.

Writing in Harvard Business Review, author and time-management coach Elizabeth Grace Saunders describes burnout as generally driven by factors including an excessive workload, a perceived lack of control and the sense that the time and effort put into a job are not commensurate with the rewards offered.

Crucially, burnout is not a gendered condition ­­– it can affect anyone. Indeed, during the pandemic, reports of burnout surged, with one global survey of more than 7,000 employees in late 2020 showing that upwards of 90% reported experiencing some form of burnout. But despite its prevalence and pervasiveness, business leaders, managers and employees have widely failed to address both its causes and consequences in a meaningful way. Worse still, burnout is widely stigmatised.

One study from 2007 showed stigma to be one of the greatest barriers to the treatment of mental-health challenges; another, from 2020, noted that perceived stigma may reflect the belief that most people view burnt out individuals as less competent than those who are not burnt out.

Data from the CDC shows women are more likely than men to talk about mental health and seek treatment – exposing them to this competence myth. But even when individuals speak out and are taken seriously, the mechanism and resources to support them often don’t exist.

That lack of institutional support means workers may find themselves at the brink – especially those who are not in a position to walk away from their jobs, or simply approach their superiors for help.

Some experts now believe, however, that Ardern’s resignation could be a sign that the conversation is shifting, and that leaders are recognising their employees’ mental health as a strategic priority.

Experts believe there are several features that distinguish Ardern as a potential catalyst for unprecedented change. First, data shows she is widely respected. Even though her popularity had slipped in recent months, her leadership was – during much of her term – applauded. The term “Jacindamania” that emerged during her tenure indicated her near-icon status on a global scale. 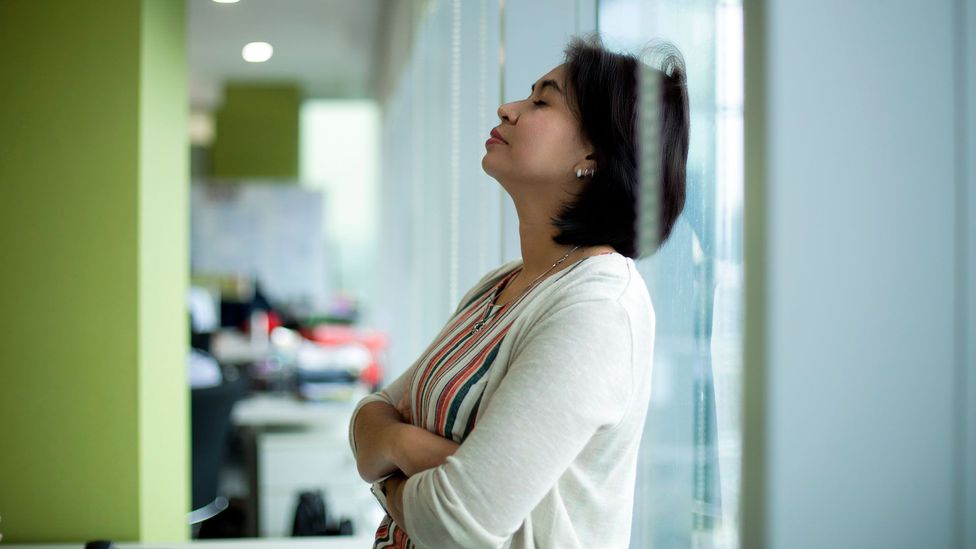 Although some experts say Ardern’s actions could help women who see themselves in her, others believe female leadership could be questioned (Credit: Getty Images)

Arden is also widely considered relatable. From her lockdown Facebook Live broadcasts – replete with toddler interruption – to her shows of emotion and impulsive gaffes, she made relatability a core tenet of her leadership style. “It’s rare that a single person’s experience can speak universally to all people and create seismic shifts in perception,” says Iona Holloway, Boston-based author of Ghost: Why Perfect Women Shrink. “Seeing your life experiences mirrored in ‘someone like you’ is incredibly valuable.”

Holloway adds Ardern’s honesty around burnout can be particularly affecting to women, who have watched her navigate some extremely challenging years as a young mother on a public stage.

Some of these experts also believe this transparency and honesty has played a critical role in demystifying burnout. “Burnout is prevalent and widely covered, but it’s often talked about abstractly as a collection of signs and symptoms,” explains Holloway. “Having someone like Ardern connected to the topic makes it more real and relatable for people.”

Ultimately, all these factors may well help individuals to recognise and admit to struggling. They may also serve as a reminder “that leaders talking openly about their own personal experiences can help reshape norms and change cultures”, says Lorraine Hariton, CEO of workplace-consultancy Catalyst.

“I believe her transparency and authenticity in communicating her decision to resign moves the discourse towards normalising being human at work – at any level,” echoes Natasha Velikoselskiy, executive coach, organisational psychologist and adjunct assistant professor of business at Columbia Business School. She adds that throughout her tenure, Ardern has modelled self-awareness and confidence – two traits business leaders and employees need to have a meaningful conversation around mental health and vulnerability in the workplace.

Not everyone is certain that Ardern’s resignation is truly going to affect positive change, however.

One reason to be sceptical may lie in the reality that although many high-profile personalities around the globe – including Arianna Huffington, Simone Biles and Naomi Osaka ­– have spoken out about burnout, the needle hasn’t really shifted on de-stigmatisation, or increased resources for workers.

That isn’t necessarily because the individuals who speak out lack credibility or influence, but because of the nature of burnout and why it occurs: it goes hand-in-hand with some of the most toxic and entrenched features of many workplace cultures, like presenteeism and fierce competitiveness. And some aren’t convinced that the characteristics that distinguish Ardern as a role model when it comes to this will be sufficient to truly affect change.

“[Arden speaking out] opens the conversation, but it won’t change the root cause of the issue,” explains Adela Hussain, a London-based management consultant and entrepreneur. “Most people overwork because they are influenced by their culture, social policy or poorly defined roles.”

Some experts even question whether it might backfire for women’s credibility in leadership. “The danger with Jacinda as a female leader sharing her vulnerability is that there’s room now for misogynists to question whether women are capable of high-profile leadership,” adds Hussain.

Danna Greenberg, professor of organisational behaviour at US-based Babson College, agrees. “I worry that authenticity on the part of high-profile women leaders will only fuel gender bias that women do not have the strength and resilience to lead – particularly in high-pressure situations,” she says, referencing recent data showing that trust in women leaders has fallen.

“While I want to believe that Prime Minister Arden’s honesty might further normalise conversations around mental health, I worry that this will in fact do the opposite and simply fuel bias against working mothers and their ascent to leadership roles,” adds Greenberg.

It’s also important to acknowledge Ardern’s privilege. For all her relatability, her job rendered her one of the world’s most powerful women: a status that a tiny minority of people will ever come close to achieving.

In other words, stepping down from a job as head of a country does not entail the same risks as quitting a salaried job in a corporation. Burnout is often ignored and suppressed because of fears related to job security and concerns that showing vulnerability might lead to the perception of being unemployable. And walking away from a job to prioritise mental health is simply economically unfeasible ­– even unimaginable – for most people.

Still, even if this moment is not entirely transformative, there may be reasons to be optimistic that it could at least further the conversation around burnout. “Whether or not the society at large is prepared to see and accept the reality of these issues in their full complexity, I believe that trailblazers like Ardern are helping dismantle the myths and bring the discourse to the next level of transparency and impact,” says Velikoselskiy.

“Human leaders were never meant to be invincible, invulnerable and emotionless,” she continues, “and unravelling those myths at the highest levels of power will help accelerate the long-overdue turn towards embracing one’s own and others’ humanity as an integral part of leadership – not an impediment or a weakness.”