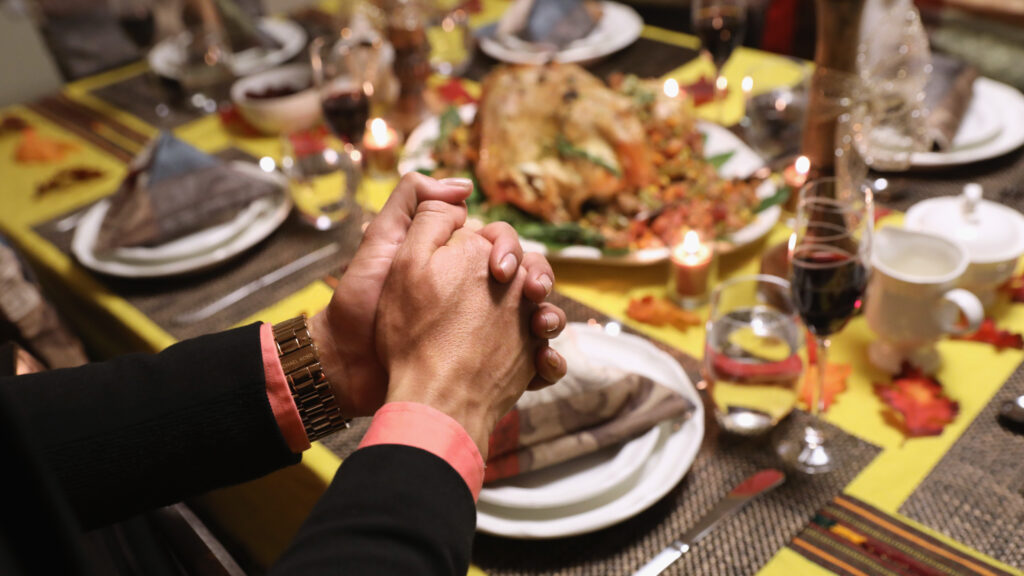 The world is fast approaching the third anniversary of those days when we got our first inkling that a new disease was spreading in China. In the months that followed, normal life was suspended, then upended. At this point, everyone is well and truly sick of Covid-19 and the accommodations we have had to make to co-exist with it.

So sick of it, in fact, that many people appear to have given up trying to avoid the SARS-CoV-2 virus. Restaurants are packed, airports are hopping. Once-ubiquitous masks are now an increasingly rare sight.

With Thanksgiving only days away, STAT asked infectious diseases experts how they’re handling the risk of catching Covid at this point. We’ve done this twice before, you may recall, when the Delta wave was surging in August 2021, and a few months later, just before Thanksgiving.

This time we wondered if people who work in the infectious diseases sphere are still taking steps to try to avoid catching the virus, and if so, which ones. We also wondered whether — maybe even hoped — they are feeling less stressed about Covid and are starting to lower their guard.

The short answer: Some appear to be, a little. But most are still using multiple measures to try to avoid Covid.

We polled epidemiologists, virologists, immunologists, and related experts, asking a series of “yes” or “no” questions; 34 replied. It quickly became apparent “not applicable” had to be an option for some questions; some of our respondents created a “maybe” category for a few.

One person who is battle-scarred from fighting the Covid wars begged off. “Between the militant zero-Covid crowd on one side and the ‘it’s just a cold’ crowd on the other, there is a lot of vitriol waiting to be fired,” this individual explained. Another answered, but asked not to be named, for the same reason.

Let’s dive into their answers to our questions.

Despite the fact that most of the people we polled are still taking precautions, those with young kids or grandkids reported the children are pretty much back to living pre-Covid-style lives. That’s both a terrific development for the children themselves and a welcome sign of how far we’ve come.

Twenty of 21 people who answered this question reported their kids or grandkids are taking part in after-school activities, having playdates, and the like. Esther Choo, an associate professor of emergency medicine at Oregon Health and Science University, noted her kids are still wearing masks in school and in other indoor settings. Grace Lee, professor of pediatrics at Stanford University School of Medicine, also said her kids mask up for group activities indoors.

Craig Spencer, an emergency room physician and associate professor at Brown University’s School of Public Health, acknowledged putting more limitations on the interactions of his two young children, saying “given the panoply of viruses circulating (flu, RSV and Covid) we are still limiting indoor playdates for them.” His 4-year-old daughter, for example, will have an early birthday party, before the weather gets too cold to hold it outside.

We found there’s a lot more willingness to eat in restaurants or attend indoor concerts or sports events than last year. Uché Blackstock, an emergency physician and CEO of the consulting firm Advancing Health Equity, has dined indoors in restaurants twice, but “it wasn’t crowded.” Megan Ranney, deputy dean of Brown’s School of Public Health, saw a Harry Styles concert in the summer, “albeit with a mask.”

Katelyn Jetelina, author of the popular Substack column “Your Local Epidemiologist,” said she’d go to a concert without a mask, as long she didn’t have an upcoming visit with grandparents or something critical at work that she couldn’t miss due to illness. “I care about transmission. However, I also care about enjoying a beer and shouting my favorite songs and, quite frankly, masks are just not welcome culturally at country concerts — so there is some social pressure at work as well,” she admitted.

When we asked about restaurant dining in August 2021, two-thirds of the respondents said they would not eat indoors; this time, nearly three-quarters said they would. Last Thanksgiving, 44% of respondents said they would not attend a large indoor event, even if masked. That figure went down to 32% this time. On concerts or sporting events, Ziyad Al-Aly is a holdout. “Noooooooooo,” replied the chief of research at the VA St. Louis Health Care System and a clinical epidemiologist at Washington University in St. Louis.

Marion Pepper, chair of the department of immunology at the University of Washington, is the only one of the respondents who doesn’t wear a mask while flying — though she dons one during take-off and landing. William Hanage, an infectious diseases epidemiologist at Harvard’s T.H. Chan School of Public Health, doesn’t mind taking his mask off to eat while in flight “because colleagues who know tell me that the ventilation mid-flight should be very good.” Michael Osterholm, director of the University of Minnesota’s Center for Infectious Disease Research and Policy, was specific. “Not just a mask … an N-95,” he said.

The majority of respondents still wear masks while they are shopping; only four of the 33 said they don’t. Most of the rest have a hard rule about masking in stores, both for their own protection and the protection of staff and other shoppers. For a few, the rule isn’t set in concrete. “I sometimes pop into the store to pick up a few things without a mask, but I wear a mask if I’m expecting it to be busy or if I will be there a while,” said epidemiologist Caitlin Rivers, a senior scholar at the Johns Hopkins Center for Health Security.

All our respondents have either had a bivalent booster or are waiting to get one. Some put off getting the shot because they’d recently had Covid. Of the 10 who haven’t yet had a bivalent booster, nine planned to get one before Thanksgiving. Kristian Andersen, a professor of immunology and microbiology at the Scripps Research Institute, plans to wait a little longer “since I’m only 4.5 months out from my previous booster.”

All but Pepper — who had Covid earlier this year — report that they are still taking additional measures to avoid catching the virus. Many, though, stressed they take the measures as much to protect others as to protect themselves. “I’d say I’m more focused on reducing my risk of spreading respiratory illness than reducing my risk of contracting it,” said Natalie Dean, a professor of biostatistics at Emory University.

Jeanne Marrazzo, director of the division of infectious diseases at the University of Alabama in Birmingham, avoids shaking hands whenever possible. Sarah Cobey, associate professor of viral ecology and evolution at the University of Chicago, carries a device that monitors carbon dioxide levels, as does Shweta Bansal, a Georgetown University researcher who studies how social behavior affects infectious disease transmission. Vineet Menachery has a device that alerts his phone if the CO2 levels around him rise above a set point, a sign ventilation isn’t adequate to lower the risk of Covid transmission. If that happens, the coronavirus researcher at the University of Texas Medical Branch in Galveston puts on a mask.

For most of our experts, though, attempting to avoid Covid doesn’t mean forgoing a traditional Thanksgiving this year. Most report they’re hosting or attending a large, multi-generational Thanksgiving feast. Last year, the experts we polled were virtually split on the idea of a large family gathering for the holiday.

Twenty-seven of our experts will be celebrating Thanksgiving with a crowd this year and most of the ones who aren’t said their decision to forgo a big gathering wasn’t Covid-related. Two are expats without extended family in the United States, and two will be traveling out of the country over Thanksgiving. Only Saskia Popescu, an assistant professor in the biodefense program at George Mason University’s Schar School of Policy and Government, scaled back her plans because of Covid concerns.

“My older and more vulnerable family [members] aren’t interested in the booster (sigh) and we all felt it best to avoid travel and larger events, so sticking with just immediate family and a couple of friends who are all fully vaccinated and are frequently tested for work,” Popescu wrote in an email.

There was an even split on the issue of whether unvaccinated relatives would be allowed to attend the family gatherings, with eight respondents saying they would and eight saying they would not. “Yes, with a negative Covid test,” said Akiko Iwasaki, an immunologist at Yale University. Syra Madad, senior director for NYC Health + Hospitals’ special pathogens program, said being unvaccinated is not a dealbreaker for entry to her gathering. “But I always share the number of people who are coming and the overall venue, so guests can decide if they have young, unvaccinated children or elderly individuals to make their own personal decision.”

Eleven respondents, the largest group on this question, said the vaccination status of their Thanksgiving guests isn’t an issue. “I don’t have any unvaccinated family members!” said Ellen Foxman, an immunologist at Yale. “All of my close and distant family members are vaccinated and boosted,” said Andrew Pavia, chief of pediatric infectious diseases at the University of Utah.

Of those hosting Thanksgiving feasts, a clear majority will use rapid Covid tests to lower the risk someone might leave with more than just a Tupperware container filled with leftovers. Eighteen said they would likely be using rapid tests. “Leaning in that direction to protect a brand-new baby and a 99-year-old great-grandmother,” said Jesse Goodman, a professor of internal medicine at Georgetown University. Eight said they won’t require it, though “… there will be lots of voluntary testing,” said Saad Omer, director of Yale’s Institute for Global Health. Robert Wachter, chair of the University of California, San Francisco’s department of medicine, still isn’t sure. “Depends on case rates,” he said.