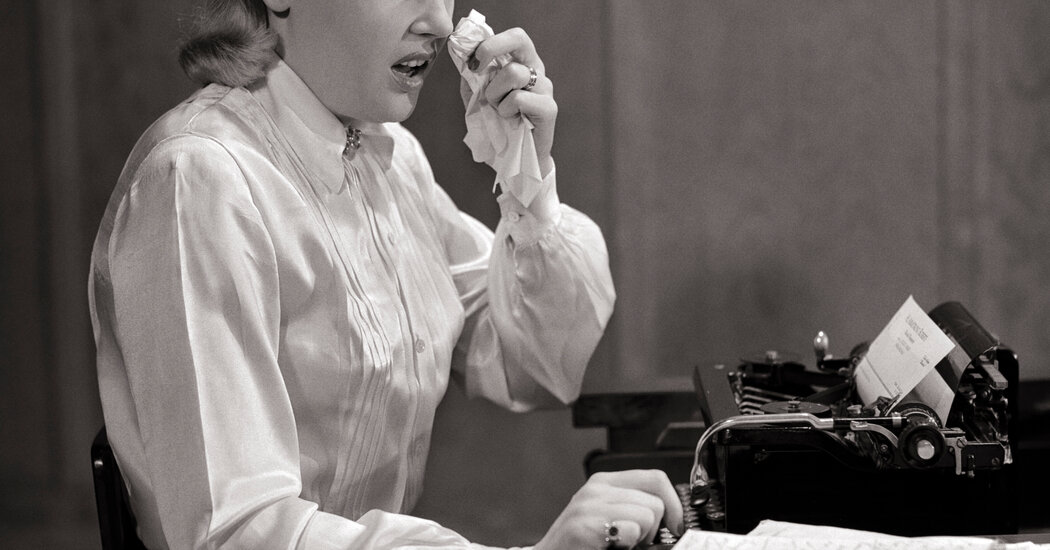 Ms. Vadnal, 37, an editor who lives in Brooklyn, succumbed to what she described as a “flulike cold,” a few days before New Year’s Eve.

Turns out, it wasn’t the worst time to be sick.

It gave her an out for the holiday. “I do not like making New Year’s Eve plans,” she said. “I love sitting on the couch and watching Andy Cohen and Anderson Cooper, and this year I got to do it guilt free.”

And she wasn’t the only one who was sick: When she returned to work on Jan. 2, she learned that three of her colleagues were sick, as well as someone’s husband. So there weren’t many disruptions to her social life. “I don’t feel like I am missing out on any events, because there aren’t any,” she said.

January is normally a quiet month, as people return home from holiday celebrations. But this year it has been even quieter, as many of them were too sick to head back into offices or classrooms. Those who are well enough may find they are one of just a few not coughing or sneezing.

Public health officials have warned of a “tripledemic,” a convergence of Covid, the flu and R.S.V. While peaking at different times, these three respiratory illnesses have made the last month difficult for many families.

Holiday parties and family gatherings were probably somewhat responsible for the spread of diseases. As of Dec. 31, most of the country had a very high or high level of influenza, according to data released by the Centers for Disease Control and Prevention. In the new year, Covid-19 hospitalizations rose to levels not seen since last winter.

In the pandemic era, the first two weeks of January seem to have become the time for getting sick.

Those who have fallen ill are taking solace in the fact that at least they are not alone. Some say their offices are empty after the holidays with people calling in sick. Many people who haven’t yet become ill are expecting to. Some feel that it is so inevitable that they are hesitant to make plans for the foreseeable future.

A 36-year-old woman who works in luxury fashion in Manhattan — and didn’t want to be named for fear of insulting colleagues — has been booking conference rooms to escape the germs in her office.

“I would rather be huddled around my laptop in a conference room than be out in our open working space with my monitor,” she said.

She said she noticed the coughing and sneezing the second she stepped foot into her office after a two-week hiatus. “The sounds started at 9 a.m. on Tuesday during the coffee hour,” she said. “I wasn’t sure why these sick people didn’t stay home. It was pretty gross.”

She believes many people are sick because if they test negative for Covid-19, they decide it is safe to go out, even if they have cold or flu symptoms.

Others have been playing the now familiar “Is the tickle in my throat Covid?” game. Except now it could be the flu or another illness too.

“As of right now all I have is this weird tickle in my throat,” said Jaimie Caiazzo, 30, a Staten Island resident who works remotely in public relations. “Every time I do something like take a nap or need to close my eyes I think, am I sick or am I being delusional?”

“I am feeling like I am waiting for the shoe to drop,” she added.

Her fiancé, whom she lives with, came down with the flu (he tested positive at the doctor’s office) on Jan. 2, the day he was supposed to return to work. So far she’s managed to avoid it, but she doesn’t know how long she’ll be able to. For now, she is trying to lay low.

She has mixed feelings about getting sick this time of year. “I think it helps that the weather is so in and out right now, so if you do get sick you can rest and relax and save yourself for bigger plans later in the year,” she said.

But it’s also a busy time for her line of work, and she doesn’t want to use sick days so early in the year. She added: “But if I do get sick I know people will understand because there seems to be this expectation that people will get sick now.”

Some people have started to question if groups should gather in-person in the first few weeks of the year at all.

Jerald Stiedaman, 47, who works for a creative agency and lives in Evanston, Ill., is thrilled his daughter, who is in fifth grade, didn’t start school until this week. “Our local school district set it up this way for the first time this year,” he said. “It kind of gives a little bit more separation and space if people are going to get sick from the holiday gatherings.”

He knows many of his daughter’s friends were traveling over the holidays. He knows at least some of them will bring home bugs, and he’s relieved that they probably won’t reach his daughter — at least for now.

“Our daughter has not yet tested positive for Covid,” he said. “We would like to keep it that way.”