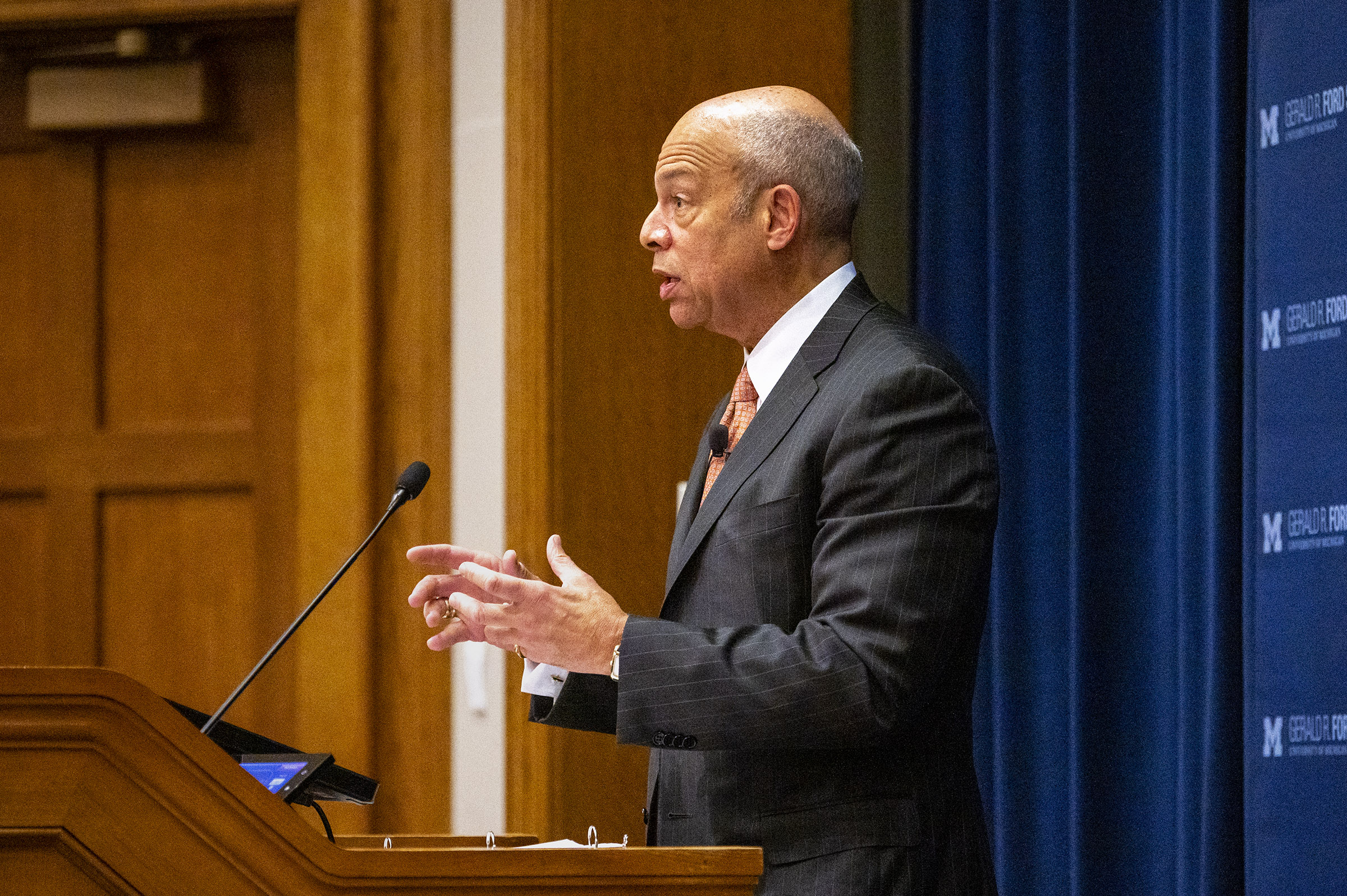 The event began with remarks from Johnson on King’s legacy, followed by a Q&A session moderated by faculty members at the Public Policy School.

Johnson began by describing his longtime friendship with King’s son, Martin Luther King III, and reflected on being able to feel King’s presence while attending Morehouse College, King’s alma mater. He told the crowd that some of the faculty at the college worked there when both King and his son attended.

“Some of the faculty at Morehouse in the 1970s were faculty in the 1940s when Dr. King was a student,” Johnson said.

Johnson said he has struggled with carrying on King’s legacy while being involved with national security, considering King’s anti-war beliefs.

“Part of my job (was) to sanction counterterrorism,” Johnson said. “That would be inconsistent with (King’s) belief that war is inherently unsafe.”

Johnson went on to describe a visit to King III’s home when he was in college, where King III’s mother, Coretta Scott King, spoke about her dream of King’s birthday becoming an official government holiday. Johnson said he was initially skeptical that it would ever become a national holiday and was overjoyed when it did.

“I admit thinking that the prospect of a national holiday for Martin Luther King, alongside George Washington and Abraham Lincoln, was a long shot, but no one in the room dared disagree with Mrs. King except my political science professor,” Johnson said.

That dream was realized when President Ronald Reagan signed a bill in 1983 that made the third Monday of January a national holiday in honor of King’s birthday, though the holiday was not first observed until 1986. Johnson said he feels the holiday helped make King’s name one of the most recognizable in the country.

“Almost every major city, including Detroit and Ann Arbor, has a street or school named after him,” Johnson said. “Almost every public school in America has his picture hanging in a classroom.”

After Johnson’s speech on King’s legacy, the Q&A session focused on public policy and Johnson’s work as the Secretary of Homeland Security. Attendees submitted questions about  U.S. refugee policy, climate change and political polarization in the country. Johnson said while major crises can serve to bring a country together, he did not feel the COVID-19 pandemic had this effect.

When asked how students should navigate polarized politics, Johnson encouraged them to actively seek out media that challenges their beliefs.

“Seek out things — especially when you’re in education — that will challenge you,” Johnson said. “Different points of view that will help you either change your point of view or reinforce your own point of view.”

Public Policy senior Michael Cardamone told The Michigan Daily after the event that he decided to attend the symposium because it featured such a high-profile speaker. He said he felt the symposium was informative and insightful, particularly on King’s legacy.

“I really liked how he brought up how people cherry-pick what Martin Luther King says, how people try to use it for their own political agenda,” Cardamone said.

Cardamone also said he was interested to hear about Johnson’s personal connection with the King family.

“Being friends with his son and also having an interaction with Martin Luther King Jr.’s wife and attending the same college that King Jr. went to was very insightful to hear about,” Cardamone said.

Public Policy professor Ann Chih Lin was one of the event’s moderators. In an interview with The Daily after the event, Lin said she was pleased with the event’s turnout and reception.

“I loved the mix of people we had in the room,” Lin said. “Students and faculty from (the University), but also from all over the campus and many visitors who were politicians, some people who are supporters of the Ford School … so I think that if we can get that mix in the room it’s really great.”

Lin said she felt it was important to hear from and speak with someone with a similar background to King and said the symposium was designed to help people understand and celebrate King’s accomplishments.

“I don’t think my opportunities to be here today and the role that I have would be the same without the Civil Rights Movement,” Lin said. “I think the message here is not just about a really distinguished speaker who’s done many things in public life, but also about the rest of us who are here.”