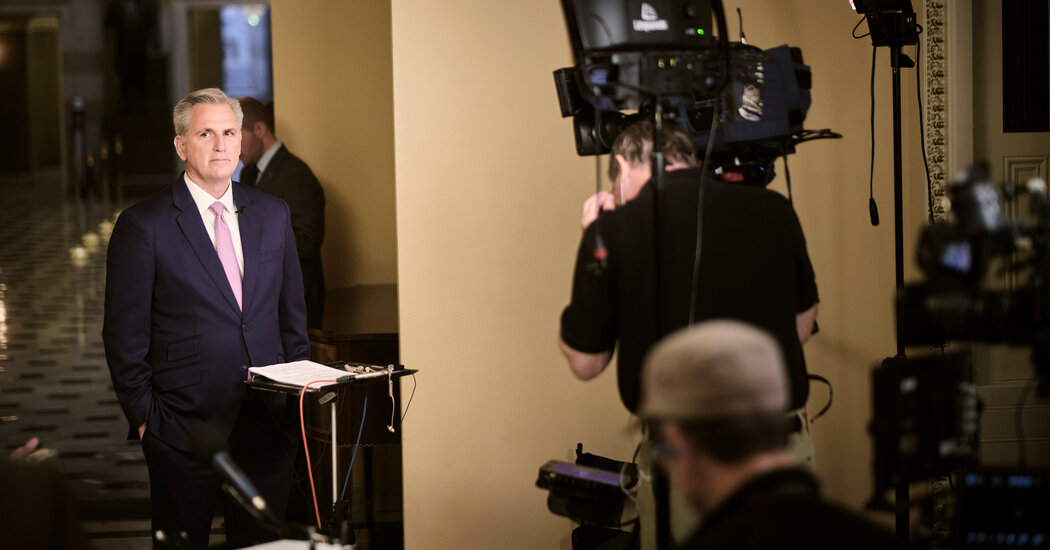 A dizzying week featured Kevin McCarthy, the House Republican leader, caught lying and another lawmaker, Marjorie Taylor Greene, grilled under oath about her role in the Jan. 6 attack.

WASHINGTON — There was a time in the nation’s capital when lines mattered, and when they were crossed, the consequences were swift and severe.

Speaker Jim Wright, a Democrat, lost his job in 1989 amid charges of corruption and profiteering. Almost a decade later, Speaker Newt Gingrich, a Republican, lost his after disappointing midterm elections.

Mr. Gingrich’s expected successor, Robert L. Livingston, then admitted he had violated the public’s trust by having an extramarital affair — even as he demanded President Bill Clinton’s resignation for having an affair with a White House intern — and bowed out on his own.

More recently, in rapid succession, Senator Al Franken of Minnesota and Representative John Conyers Jr. of Michigan, both Democrats, were forced to exit Congress amid charges of sexual harassment during the #MeToo era. On the Republican side, Representatives Blake Farenthold of Texas, Patrick Meehan of Pennsylvania and Trent Franks of Arizona were also driven out by allegations of sexual impropriety.

Yet when the House Republican leader, Representative Kevin McCarthy of California, was shown to have lied about his response to the deadliest assault on the Capitol in centuries and President Donald J. Trump’s culpability for it, there was little expectation that the consequences would be swift or severe — or that there would be any at all.

Dissembling is not a crime, but doing so to conceal a wholesale reversal on a matter as serious as an attack on the citadel of democracy and the possible resignation of a president would once have been considered career-ending for a politician, particularly one who aspires to the highest position in the House.

Not so for a Republican in the age of Trump, when Mr. McCarthy’s brand of lie was nothing particularly new; maybe it was just a Thursday. On Friday, another House member, Representative Marjorie Taylor Greene, Republican of Georgia, said under oath at an administrative law hearing in Atlanta that she could “not recall” having advocated Mr. Trump imposing martial law to stop the transfer of power to Joseph R. Biden Jr., a position that would seem difficult to forget.

“It’s a tragic indictment of the political process these days — and the Republican Party of late — that truth doesn’t matter, words don’t matter, everybody can be elastic in areas that were once viewed as concrete,” said Mark Sanford, a former Republican governor of South Carolina who lied to the public about his whereabouts when he was pursuing an extramarital affair in South America and was censured by the State House of Representatives. “You cross lines now, and there are no longer consequences.”

Mr. Sanford’s political comeback as a Republican member of the House ended when he crossed the one line that does still matter in his party: He condemned Mr. Trump as intolerant and untrustworthy. Mr. Trump called him “nothing but trouble,” and Mr. Sanford was defeated in a primary in 2018.

It was Mr. Trump himself who showed just how few consequences there could be for transgressions that once seemed beyond the pale for the nation’s leaders in 2016, when he survived the release of leaked audio in which he boasted of sexually assaulting women — then went on to win the presidency. In the years afterward, he survived two impeachment trials, on charges of pressuring Ukraine for his own political gain and of inciting the Capitol riot, and he continues to spread the lie that the 2020 election was stolen from him.

Those episodes were vivid proof, if any more were needed, that tribalism and party loyalty now outweigh any notion of integrity, or even steadfast policy beliefs. But if there were any questions about whether the end of Mr. Trump’s presidency would begin to restore old mores and guardrails, the past months have put those to rest.

Last month, Representative Madison Cawthorn, Republican of North Carolina, angered fellow Republicans by saying lawmakers he “looked up to” had invited him to parties involving sex and cocaine. The allegations drew condemnation from Mr. McCarthy, who told Republican lawmakers that Mr. Cawthorn had later admitted they were untrue, though the House leader stopped short of punishing him.

Mr. Cawthorn’s troubles seemed to get worse on Friday when Politico published photos of him in women’s lingerie, undercutting the image he presents of himself as a social conservative. Hardly chastened, Mr. Cawthorn responded on Twitter: “I guess the left thinks goofy vacation photos during a game on a cruise (taken waaay before I ran for Congress) is going to somehow hurt me? They’re running out of things to throw at me.”

He then asked people to “share your most embarrassing vacay pics in the replies.”

In Missouri, Eric Greitens, who resigned from the governorship in 2018 amid charges that he stripped the clothes off his paramour, taped her to exercise equipment in his basement, photographed her and told her he would release the nude photos if she told anyone of their affair, is running for the Senate as a Trump-loving conservative. When his ex-wife accused him of domestic violence in a sworn affidavit last month, he pressed on, near the top of the polls, saying she was being manipulated by Senator Mitch McConnell of Kentucky, the Republican leader, and Karl Rove, President George W. Bush’s former political adviser.

“The Greitens campaign has received tremendous support from donors and patriots across the country who see the deception and lies peddled by establishment RINOs,” said Dylan Johnson, his campaign manager, using the acronym for “Republicans in name only.” “Since they launched these unfounded attacks in the last few weeks, the campaign has seen an exponential increase in the rate of donations, sign-ups and engagement.”

Mr. McCarthy’s latest travails with the truth are reminiscent of the last time he had the speakership in his grasp and instructive about how Mr. Trump has changed the landscape.

Then, as now, the California Republican’s troubles really started when he told the truth. In 2015, after Speaker John A. Boehner handed over the gavel, Mr. McCarthy made the mistake of saying on camera that the appointment of a special committee to examine the terrorist attack on a U.S. government compound in Benghazi, Libya, was aimed at least in part at diminishing the approval ratings of Hillary Clinton, who had been secretary of state at the time of the attack.

Fellow House Republicans were furious, insisting that their pursuit of the issue had nothing to do with politics. They gave the speaker’s gavel to Representative Paul D. Ryan.

This time, the truth Mr. McCarthy told was that Mr. Trump’s conduct on Jan. 6 had been “atrocious and totally wrong” and that he planned to seek his resignation. The lie Mr. McCarthy told was that he had said no such thing and that The New York Times had made it up, a statement that was quickly refuted by his taped voice telling Representative Liz Cheney, Republican of Wyoming, exactly what The Times said he had said.

But unlike in 2015, partisan hatred of the media and a desire for party unity might carry the day. Republicans said on Friday that they were singularly focused on winning control of the House. Their voters are far more concerned with the policies of Mr. Biden and Speaker Nancy Pelosi than the words of the House minority leader, whom most of them have never heard of, said former Representative Jason Chaffetz, Republican of Utah.

“Conservatives and Republicans think it’s an unfair fight in the media; it’s always a Republican issue that gets the ink and not the Democrats,” said Mr. Chaffetz, who challenged Mr. McCarthy for the speakership in 2015 when he stumbled. “They feel picked on.”

“That’s not to justify anything,” he said, “but the treatment in the national media is something that bolsters Republicans.”

As the news media parsed Ms. Greene’s testimony on Friday during a long-shot hearing to determine whether she was an “insurrectionist” disqualified from seeking re-election, the congresswoman was fund-raising off what she says is persecution. On the witness stand, she laughed off the charges that she had supported the rioters on Jan. 6 because the evidence against her had been reported by CNN and other outlets that she said could not be trusted.

In her fund-raising appeal, she made the most of her day on the stand.

“The deck has been so stacked against me that I had to file a lawsuit to stop this charade,” she wrote to supporters before asserting with no evidence that she would probably have to take her battle to stay on the ballot to the Supreme Court. “Fighting their fraudulent lawsuit could cost me hundreds of thousands of dollars.”

Indeed persecution, not propriety, is a watchword, not only in Washington but in state-level fights in which Republicans say their actions are merely to counter the overbearing efforts of “socialist” liberals and “woke” corporations.

Representative Charlie Crist of Florida, who was a Republican governor of his state before he became a Democratic congressman, insisted that honesty was as important today as it was when Abraham Lincoln was extolled as “Honest Abe” and a myth grew up around George Washington admitting he had chopped down a cherry tree because he could not tell a lie.

Mr. Crist is now seeking the governorship as a Democrat, and he said on Friday that if he won a contested primary, he planned to make honesty central to his campaign to unseat Gov. Ron DeSantis, a Republican.

“It already is part of this campaign,” he said. “It needs to be and it should be. It goes to the core essence of integrity.”

For Republicans, the ultimate arbiter of lines not to be crossed and the consequences to be paid remains Mr. Trump. For now, the former president signaled all is fine with Mr. McCarthy: “I think it’s all a big compliment, frankly,” he told The Wall Street Journal on Friday. If Mr. Trump decides the House leader must pay for his prevarications — or for the truths he tried to hide — the price still could be high.

Take it from one who knows: Mr. Sanford.

“We live in very strange times in politics,” he said as he was hustling to his son’s wedding rehearsal dinner. “I hope they can self-correct, but I worry they can’t.”