LONDON, Jan 25 (Reuters) – Earnings from major European companies on Wednesday offered some reasons for optimism about the region’s corporate health, even as investors worry about the slowing global economy.

Fourth-quarter earnings from ASML Holding NV (ASML.AS) exceeded expectations and the Dutch technology company, Europe’s largest, forecast a rise of more than 25% in 2023 sales despite possible new curbs on exports to China.

CEO Peter Wennink said that although economic uncertainty and growing semiconductor inventories were clouding the outlook, customers see conditions improving towards the end of the year and China’s economy recovering after COVID-19 curbs were ended.

“That means that the demand is still higher than what we can make,” he said. Shares in ASML were lower after the results, having rallied recently to hit their highest since last April.

Shares in budget airline easyJet EZJ.L shot up more than 10% to their highest since June after it said it expected to beat market expectations this year based on the strength of bookings into summer.

Rivals Ryanair (RYA.I), Wizz Air (WIZZ.L) and BA-owner IAG (ICAG.L) got a lift too, as investors cheered the latest evidence that people will not sacrifice their holidays even as double-digit inflation leaves them with less money to spend.

Helped by strong orders in Europe, French train maker Alstom (ALSO.PA) posted an 8% rise in third-quarter sales. Its shares fell after hitting their highest in almost a year in early trade.

While it is still early in the corporate earnings season, the results offer some hope that recent economic data which has buoyed equities this month is grounded in reality.

Expectations that the economy will make a soft landing in 2023 have grown as a result of China’s reopening from three years of zero-COVID policies and the fact that Europe has managed to keep the lights on through the winter, helped by warmer weather and ramped-up energy capacity.

IMF Managing Director Kristalina Georgieva said last week that the Fund’s new 2023 global growth forecast, due soon, could be revised upwards slightly from a current 2.7% – a turnaround from the gloomy tone she had struck at the start of the year.

Even Germany, one of the economies most exposed to last year’s soaring energy prices, is now expected to dodge a recession in 2023.

On Monday, a key U.S. survey showed businesses see lower odds that the United States is already in or will fall into recession this year. 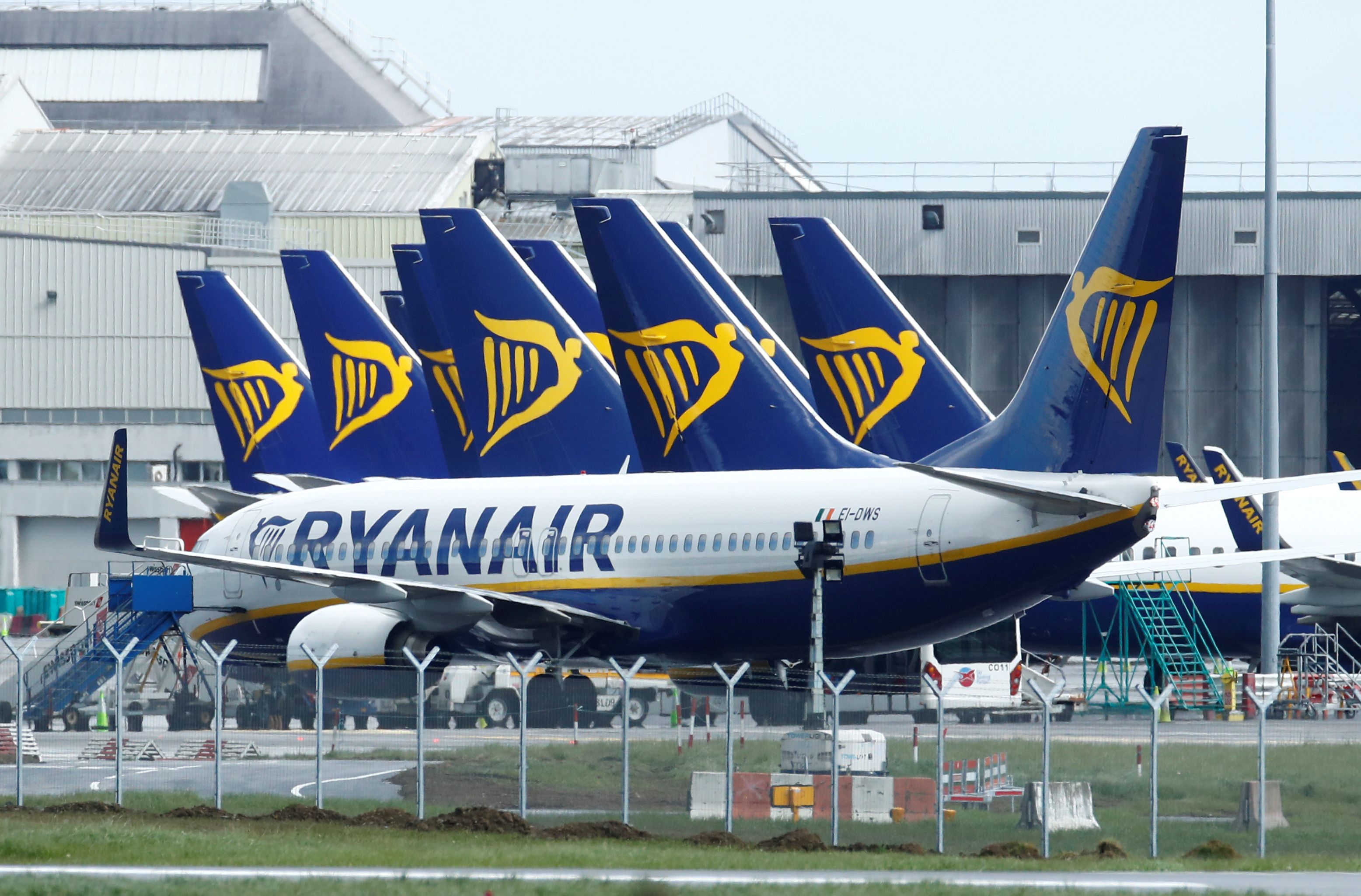 [1/2] Ryanair planes are seen at Dublin Airport, following the outbreak of the coronavirus disease (COVID-19), Dublin, Ireland, May 1, 2020. REUTERS/Jason Cairnduff

That greater economic optimism has in turn raised hopes that the corporate downturn may not be as severe as feared just a few weeks ago.

The pan-European STOXX 600 index (.STOXX) is up more than 6% since the start of the year, hitting its highest since April last week after better-than-expected economic data.

Results on Thursday from heavyweights SAP (SAPG.DE), Nokia (NOKIA.HE), Diageo (DGE.L) and LVMH (LVMH.PA) will be a further test.

Expectations for fourth-quarter 2022 earnings and revenues have dimmed further, however, with Refinitiv I/B/E/S data on Tuesday suggesting European companies will see barely any revenue growth.

Sentiment on Wall Street took a turn too, as Microsoft’s (MSFT.O) outlook weighed down technology stocks, and after a bleak quarterly report from Boeing.

“After a couple of strong days for Wall St on expectations the Fed is about to pause, earnings are just looking a bit wobbly,” said Market.com analyst Neil Wilson.

Tesla (TSLA.O) will report after market close later on Wednesday.

Not everything was rosy in Europe. Swiss fragrance and flavour maker Givaudan (GIVN.S) posted a slowdown in end-year sales, putting further strain on margins in a year marked by high input costs and supply chain disruptions.