Sanaa Seif, sister of Alaa Abdel-Fattah, one of Egypt’s best-known dissidents, was recently in Berlin. She spoke to DW about her brother’s hunger strike and Europe’s double standards on Ukraine and the Middle East.

Sanaa Seif isn’t allowed to disclose the names of all of the politicians she met with in Germany recently. Some of the lawmakers wanted to keep the meetings private.

That actually tells you a lot, explained the Egyptian 28-year-old, who has recently been touring Europe and the US, advocating for her brother, Alaa Abdel-Fattah, and promoting his recently published book.

“It doesn’t make sense to me when I see German politicians shy away from talking about human rights,” Seif told DW. “It’s like they don’t want to rock the boat.”

Her brother, Abdel-Fattah, is one of Egypt‘s best-known dissidents and possibly one of the most high-profile political prisoners in the Arab world. Widely seen as an icon of Egypt’s 2011 revolution, he was arrested again in 2014 for allegedly taking part in an unauthorized protest and has mostly been in jail since then. Last December, he was sentenced to five more years for an old Facebook post.

His April 2022 book, “You Have Not Yet Been Defeated,” has been described by reviewers as “a powerful collection of essays … that trace his and Egypt’s tragic descent from hope during the uprising of 2011, to brutal military dictatorship.”

Abdel-Fattah is currently on hunger strike.

Meanwhile, his sisters, Mona and Sanaa, are advocating for his transfer to a jail in Britain. Their brother was able to become a duel British-Egyptian citizen last December because their mother was born in Britain.

“It would be face-saving for the Egyptian authorities to deport him as a criminal,” Seif explained. “But of course, in London we would not be considered criminals.”

But for this plan to work out, there has to be pressure on Egypt from the international community, she told DW. That’s why Seif has been traveling the world over the past few months. It is also why she’s disappointed that some of the German politicians she met with while in Berlin in mid-July wanted to keep their meetings secret.

“Either they are not aware of how much leverage they actually have in Egypt, or they don’t want to rock the boat,” said the activist, who has herself spent time in prison in Egypt, most recently after she was convicted of spreading what local authorities claimed was fake news about COVID-19 in Egyptian prisons.

She noted that at the same time she was meeting members of the German parliament behind closed doors, Egypt’s autocratic leader, President Abdel-Fattah el-Sissi, was meeting his German counterpart, Frank-Walter Steinmeier, and German Chancellor Olaf Scholz in public. 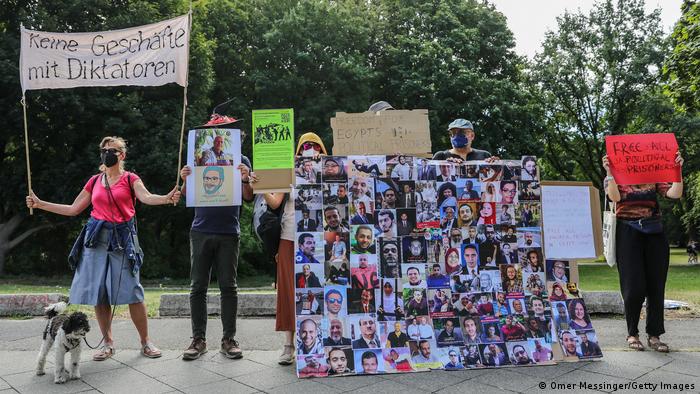 In Berlin, there were small protests against the Egyptian president’s visit this month

At a press conference in Germany after the high level meetings, el-Sissi told journalists that, “gas produced in the east of the Mediterranean could be transported and exported to Europe through Egypt.”

“Although it was never told to me explicitly, I always felt that the elephant in the room [during the meetings] was the gas issue,” Seif told DW. “And that’s why I’m disappointed.”

She argued that Germany’s relationship with Egypt doesn’t have to be “black and white.”

“You can still create really strong partnerships with oppressors like the Egyptian regime,” she said. “But just go about it differently, and put human rights at the center of the relationship.”

Both Scholz and el-Sissi said that they had also discussed human rights during their meeting in Berlin, but neither went into any detail on political prisoners. In the recent past, the Egyptian government has denied that the country has any political prisoners at all. In June, it said that Seif’s brother, Abdel-Fattah, wasn’t actually on hunger strike.

Groups such asHuman Rights Watch counter such claims, saying that Egypt “has been experiencing one of its worst human rights crises in many decades” and that “tens of thousands of government critics, including journalists, peaceful activists, and human rights defenders, remain imprisoned.”

“Sleepwalking into an unhealthy relationship means that [EU] politicians have learned nothing from the war in Ukraine. It’s very short sighted,” Seif pointed out. “At first the solidarity with the Ukrainian people was very inspiring. But now that we’re approaching winter, it seems like everybody is worried and making [energy] more of a priority. That is scary for everyone.”

Asked why she thought it was “scary for everyone,” she explained that people in the Middle East are accustomed to double standards from their Western neighbors. For example, many have criticized the way Ukrainian refugees were greeted in Europe with welcome arms, as compared to the way asylum seekers from Arab-majority countries tend to be.

“As an Arab, it’s not a surprise there are double standards,” she said. “But what’s really worrying is the fact that, if you’re not going to show solidarity with other people that look like you, then what chance do we Arabs have? That’s frightening for people all over the world.”

Despite all this, Seif still has some hope, although it’s of a more personal kind.

The Egyptian woman, whose whole family are well-known activists — her father was one of Egypt’s best-known human rights lawyers, her mother a mathematician and women’s rights activist — believes that the upcoming COP27 climate conference in Egypt could provide an opportunity to push for change back home.

Preparations in the Red Sea resort town of Sharm el-Sheikh, where the conference is due to be held, are major and include much new construction.

“So this is more like a World Cup [football contest] to el-Sissi,” Seif told DW. “He wants this PR moment because it’s a way to gain legitimacy on the world stage. Instead of just sleepwalking into it [COP27], world leaders could condition participation on some human rights concessions,” Seif suggested. 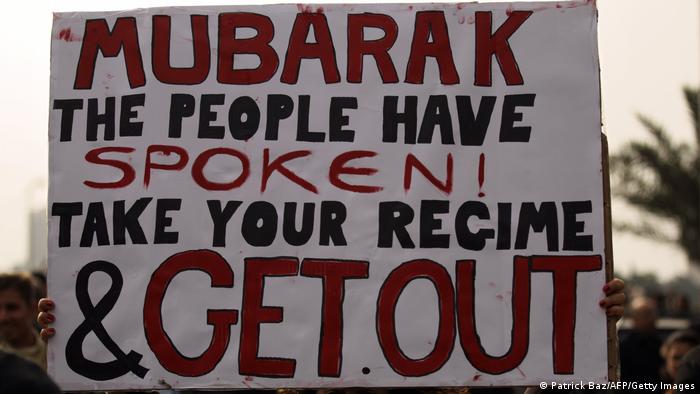 She pointed out that Egypt’s foreign minister had recently met with climate change activists. “And he never meets with activists of any kind!,” she exclaimed. That’s why visiting environmental activists also have an opportunity to highlight Egypt’s terrible human rights record, she suggested.

As for her own family, she said that it was in “survival mode” after years of being targeted by the Egyptian government. “We come from a movement that was defeated,” she conceded, referring to the popular revolution that toppled former Egyptian dictator, Hosni Mubarak, during the so-called Arab Spring in 2011. “We know that, we’re not naive about it.”

“So now we look at it from a very pragmatic point of view,” concluded Seif, whose plan is to continue traveling and advocating for her brother’s release.

“Personally, I still have hope for my family. Whatever happens next, I’m still waiting for a finish line, where we can be reunited as a family.”