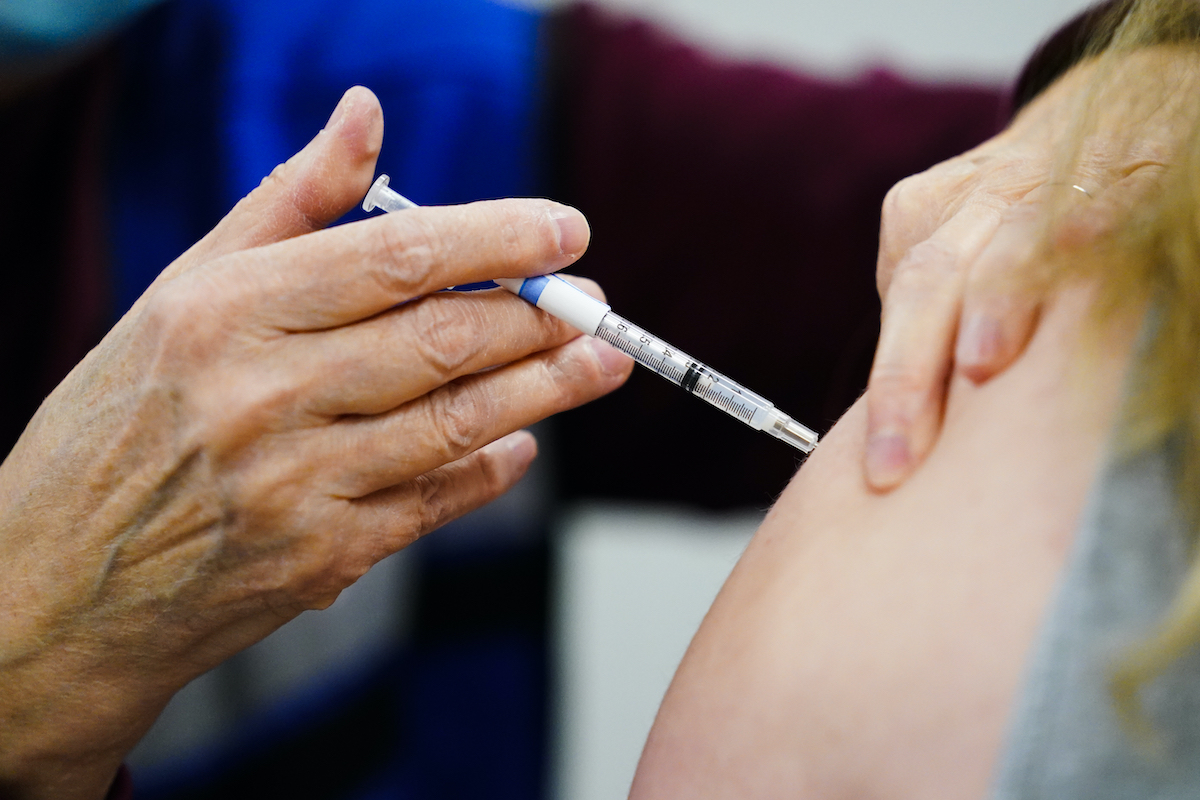 Most days, the storefront, sandwiched between a Thai restaurant and a karate school in a Jamison shopping center, sits empty.

But three days a week, the space becomes a makeshift COVID-19 vaccine clinic for Bucks County residents. On a recent morning, most people who came in sought the new bivalent booster vaccine.

“I’m surprised there’s not a lot of people here,” said Jamison resident Charles Kowalski outside the clinic shortly after he got his shot.

Kowalski’s visit was a family affair — his daughter, Carrie, and wife, Mary, also got their bivalent booster vaccines Monday morning.

“I think the rest of it is going to be like a flu shot every year,” Kowalski said. He was eager to get another dose, as he remains at high risk for severe COVID-19 illness as an organ transplant recipient.

Health providers and residents in the Greater Philadelphia region said early turnout for the new bivalent booster doses has been sporadic, and at times sluggish, at individual clinics so far. It’s a sign that COVID vaccine access has grown so much that it is on its way to becoming just as normal as other vaccinations.

“Ultimately, we want [these vaccines] to become a part of our primary care settings and a part of our routine vaccines where it’s no longer a specialized item,” said Careylle Lasher, director of Camden County’s Department of Health and Human Services.

Federal agencies authorized COVID-19 bivalent booster vaccines made by Pfizer-BioNTech and Moderna earlier this month. For many people, it’ll be their third or fourth shot against coronavirus in two years.

In anticipation of the authorization, states and cities were able to pre-order thousands of the new booster doses, some of which have only recently made their way to county and local vaccine clinics.

More health clinics, pharmacies, doctors’ offices, and other medical facilities have, over time, been able to carry and administer the vaccines, including the new bivalent booster.

Bucks County spokesperson James O’Malley said vaccine uptake at the county clinics has declined, with fewer than 25 people per day coming in for vaccinations in recent weeks. Vaccinators said these same clinics averaged more than 150 shots an hour at peak times when the vaccines first became available to the general public in early 2021.

It’s one reason why the county plans to close its three free vaccine clinics by the end of the month.

In Philadelphia, city health officials could not speak to what vaccine uptake looked like in the first few days of the bivalent booster rollout and said it was “still too soon to gage public demand for the bivalent booster.” The city operates at least eight health centers that offer COVID-19 vaccines to children and adults.

Lasher said vaccine demand has changed at sites in Camden County. There was a bump in interest at the county’s main vaccine clinic in Blackwood immediately following the introduction of the bivalent boosters, she said, but nowhere near the turnout seen with previous vaccine rollouts.

Vaccine fatigue could be playing a role, Lasher said. She added that people who’ve already received their primary series of shots and at least one previous booster may “feel a certain level of protection and they have the thought that they can afford to wait a little bit and see how the [bivalent] vaccine does.”

Camden County has no immediate plans to scale back their vaccine operations. They’ve recently added hours to accompany the latest rollout of new vaccines, but that’s temporary.

“I think if there was a great spike, we would have seen it in this first week out,” Lasher said.

Going forward, Lasher said she expects a slower and steadier acceptance and uptake of the new booster shots. Additional public health messaging could also help increase demand and participation at the local level, she said.

“We’re working here locally, but I think there needs to be a greater state and federal voice really educating people on the availability and benefits of this new booster,” she said.

Michael Carroll, of Doyleston, didn’t wait too long to seek out the new booster. He stopped over at the vaccine clinic in Jamison Monday morning and quickly got a shot in the arm.

It was a sharp contrast to his experience getting the first round of vaccines in early 2021.

“When the vaccine was coming out, my whole family wanted to get it as fast as humanly possible, so we were tracking everything, everywhere,” Carroll said. “The first couple ones that I got, I drove, like, 45 minutes.”

But on this Monday morning, the trip to Jamison was short, foot traffic into the clinic was light, and getting a vaccine was quick.

“I was in, I was out very, very quickly,” said Nancy Branca, who lives just down the street from the clinic in Jamison. “I’ll be traveling, so I’m very happy that I am, you know, boosted further.”