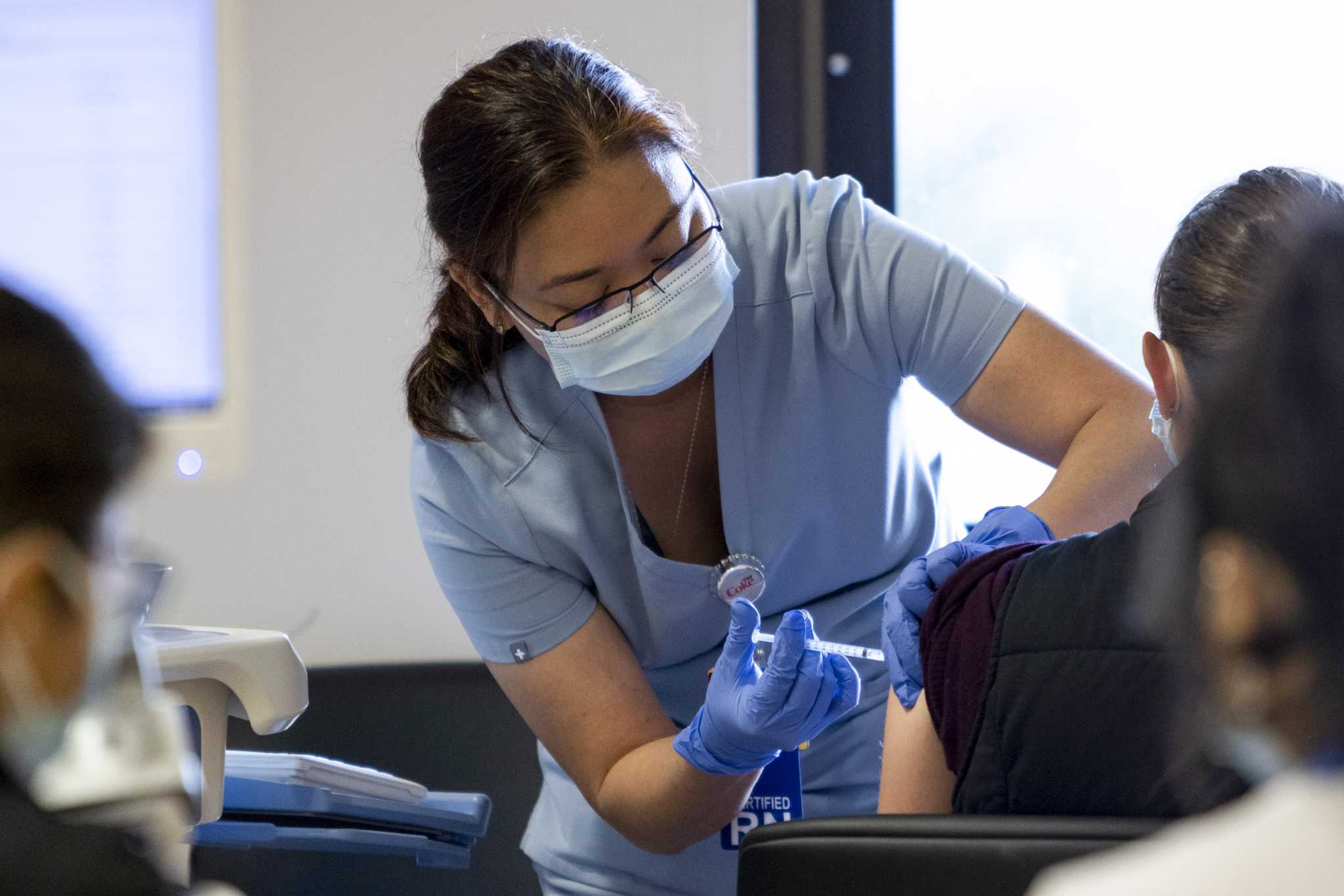 As COVID cases creep up in the Bay Area, some precautions are staring to be reintroduced. The BART board, for instance, voted on Thursday to reinstate a mask mandate on trains and platforms until the middle of the summer. Some forecasts are indeed worrisome: A model developed at the Mayo Clinic projects that U.S. COVID cases will double in the next two weeks — albeit from a low base, and still at levels well below the December-January omicron peak. For those who do catch the virus, what happens in the body even if symptoms never appear? We talked to scientists about how asymptomatic COVID runs its course.

Bay Area counties elevated into “medium” transmission levels, per CDC: Two Bay Area counties are now classified as having a “medium” level of coronavirus transmission, according to metrics by the U.S. Centers for Disease Control and Prevention. Marin and San Mateo counties, along with Santa Cruz County, are now the only ones in the entire state to have moved up from the “low” transmission category, based on the agency’s revised criteria. They are among about a dozen counties in the western half of the United States not currently in the minimal risk category. The COVID-19 risk level for each region is measured by the number of cases, hospitalizations and intensive care unit admissions.

Should you worry about BA.2.12.1 subvariant now spreading in California? Yet another omicron offspring, once again more infectious than its predecessors, is climbing rapidly in California and could make up half of new cases “in a matter of days,” health officials said. It’s unclear whether the coronavirus subvariant — known as BA.2.12.1 — will hasten the rising swell of cases across the state, including in the Bay Area. But it’s believed to be driving a surge in the New York region and other parts of the Northeast, where it already makes up nearly 60% of cases, according to estimates by the Centers for Disease Control and Prevention. Read the full story.

Hospitalizations climb in S.F. as Bay Area COVID cases jump: Coronavirus cases have climbed about 70% in California since the beginning of the month, off the low rates reported following this winter’s omicron surge. Cases in the Bay Area have climbed even more, up 155% over the same period, according to state data analyzed by The Chronicle. As of Friday, the Bay Area reported roughly 23 cases per 100,000 residents per day, compared to 14 cases per 100,000 for the state. San Francisco and San Mateo counties are outpacing all other areas with COVID-19 infections, each reporting 31 cases per 100,000 residents. That’s nearly double the 16 per 100,000 tallied in Los Angeles, the nation’s most populous county. San Francisco’s coronavirus test positive rate has jumped to 7.4%, and hospitalizations have nearly doubled, with 44 COVID-19 patients in the city’s hospitals as of Friday compared to 24 at the beginning of the month.

Vaccines for youngest children may arrive by June: The Food and Drug Administration on Friday scheduled dates in June to review COVID-19 vaccine data for children 5 and under, the last remaining group not cleared for the shots. The FDA meetings are typically the final step before authorizing the rollout of vaccines. The agency’s outside panel of experts will meet on June 8, 21 and 22 to review applications from Moderna and Pfizer for child vaccines. The dates are tentative. “We intend to move quickly with any authorizations that are appropriate once our work is completed,” said Peter Marks, director of the Center for Biologics Evaluation and Research.

Los Angeles County reports “pretty significant” increase in COVID cases, hospitalizations: Coronavirus cases and hospitalizations are rising in Los Angeles County at a rate that Public Health Director Barbara Ferrer called “pretty significant” during a press briefing on Thursday. She encouraged residents of the nation’s most populous county to get vaccinated and boosted as cases have doubled since the beginning of April. The county is reporting 122 cases a week per 100,000 residents, according to data compiled by the Los Angeles Times. There are 249 people hospitalized with COVID-19 in the county, up from 209 last Friday. Ferrer added that public health officials have seen a rise in outbreaks at workplaces and schools since the indoor mask mandate was lifted, with “the number of cases reported in students in elementary schools, middle schools and high schools more than doubled” since late March. Ferrer urged people to take mitigation efforts seriously: “You don’t want unchecked transmission, which leads to the possibility of more variants of concern.”

White House communications director tests positive for COVID-19: Kate Bedingfield is the latest administration official to test positive for the coronavirus, according to a tweet she posted on Friday. The White House communications director said President Biden is not a close contact. “This morning, I tested positive for COVID-19. I last saw the President Wednesday in a socially-distanced meeting while wearing an N-95 mask, and he is not considered a close contact as defined by the CDC,” she said, adding she was vaccinated and boosted and experiencing mild symptoms. She will work isolated for five days.

Trump officials aimed to silence CDC on pandemic guidance for churches: The former administration attempted to restrict the U.S. Centers for Disease Control and Prevention’s coronavirus mitigation measures for churches early in the pandemic, according to newly released emails. As COVID-19 outbreaks ramped up in places of worship Kellyanne Conway and Paul Ray advised the president to strike the recommendations, such as holding online services, from the agency’s guidance. “The new CDC draft includes a significant amount of new content, much of which seems to raise religious liberty concerns. In the attached, I have proposed several passages for deletion to address those concerns,” Ray wrote. In response to the release of the emails, Representative James Clyburn, chairman of the select subcommittee on the coronavirus crisis, said in a statement Friday, “As today’s new evidence also makes clear, Trump White House officials worked under the direction of the former president to purposefully undercut public health officials’ recommendations and muzzle their ability to communicate clearly to the American public.”

Rocker Ozzy Osbourne’s COVID diagnosis has wife Sharon “very worried”: Rock and Roll Hall of Fame icon Ozzy Osbourne has contracted COVID-19 following a string of other health issues, his wife Sharon Osbourne revealed through tears Thursday on her new show “The Talk UK.” “I am very worried about Ozzy right now,” she said. “We’ve gone two years without him catching COVID and it’s just Ozzy’s luck he would get it now. My family is my life.” Sharon said she is eager to return home to Los Angeles to be with Ozzy, who in January 2020 revealed he was battling Parkinson’s disease. He has also recently had back and neck surgery, as well as a life-threatening staph infection.

What actually happens in your body when you have asymptomatic COVID? Many people who get tested regularly for COVID-19 — including, recently, House Speaker Nancy Pelosi and Vice President Kamala Harris — test positive despite reporting no symptoms at all. But such asymptomatic infections, which can also occur with other kinds of viruses, are difficult to track, since you may never know if you had one. So for those who remain symptom-free, what actually happens in the body, and what does that mean for how the virus is transmitted? Read the full story.

BART temporarily reinstates mask mandate: BART’s board of directors on Thursday approved a temporary amendment to require riders to wear masks in paid areas of the system with limited exceptions. Passengers will again be required to wear face coverings on trains and all portions of stations beyond fare gates, according to an update from the agency. Free masks will be available in station agent booths for those who need them. The rule will be effective until July 18, unless the board decides to extend it, BART officials said. Read the full story.

U.S. COVID cases are forecast to double in the next two weeks: With BA.2 infections rising steadily in many parts of the U.S., including California, daily COVID-19 cases are projected to increase 99.9% nationally in the next two weeks, according to modeling from the Mayo Clinic. With the national coronavirus positive test rate now at 6%, daily cases are expected to rise from 40,224 on April 23 to 80,418 by May 7. The average of daily cases will increase from 14 per 100,000 people to 24.5 per 100,000 over the same period. Bay Area hotspots — including San Francisco, Marin, San Mateo, Santa Clara and Napa counties — are forecast to experience the biggest uptick in cases in the state during that time.

Measles cases up 80% in 2022 due to pandemic disruptions: A dramatic surge in measles cases among children in the first two months of this year is a “worrying sign” that could signal larger outbreaks of vaccine-preventable disease due to pandemic-related disruptions, according to a joint bulletin from the World Health Organization and UNICEF. “The risk for large outbreaks has increased as communities relax social distancing practices and other preventive measures for COVID-19 implemented during the height of the pandemic,” the agencies said. Almost 17,338 measles cases were reported worldwide in January and February 2022, compared to 9,665 during the first two months of 2021. Because it is so contagious, health experts worry measles could grow exponentially as millions of children have missed routine vaccinations due to the pandemic. “It is encouraging that people in many communities are beginning to feel protected enough from COVID-19 to return to more social activities. But doing so in places where children are not receiving routine vaccination creates the perfect storm for the spread of a disease like measles” said Catherine Russell, UNICEF Executive Director.