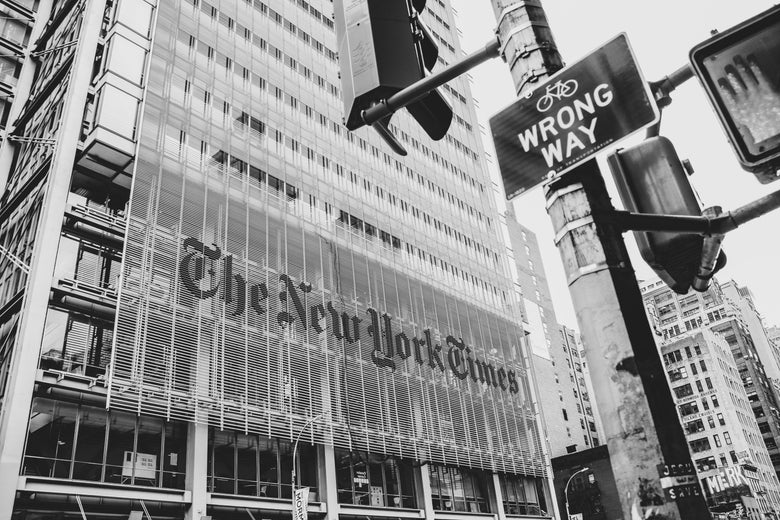 On June 9, the New York Times’ marquee newsletter The Morning arrived in inboxes with the subject line “COVID and race.” The words below it made a bold claim: “The death rate for white Americans has recently exceeded the rates for Black, Latino and Asian Americans.”

It was a classic counter-intuitive take on the data from David Leonhardt, who writes to 5 million readers each morning with analysis on everything from the virus to Roe vs Wade to mass shootings, which are often anxiety-soothing interpretations that fall into the broad category of “so-and-so horrible thing”—the fall of abortion rights in America, the latest shooting—“isn’t as bad as you think.”

And now: “the racial disparities of a deadly virus…not as bad as you think!” Within hours of the publication “COVID and Race,” a top public health expert had called for a retraction of the column. Epidemiologist Katelyn Jetelina (whose work we frequently reprint at Slate) wrote a response post titled “The Morning today is…wrong” on her Substack.

The main point of the criticisms was that Leonhardt did not adjust for age in his statement. The overall death rate is indeed the highest right now for white Americans, according to the Centers for Disease Control and Prevention—that is, for every 100,000 of us, there are more dying compared to other groups. So Leonhardt, in very broad terms, was right.

However—and this is a big however—if you zoom in on a particular age group, the death rate may actually be actually higher for Black Americans. This is known as Simpson’s paradox, Something that is true from a bird’s eye view may not be at all true when you start looking at things a little bit more granularly. Adjust the data for age, and Black Americans are still dying at a higher rate than white Americans, even if that gap has closed a bit since the start of the pandemic. Basically, white Americans in general have the privilege of existing on this Earth to the point where they are that much more likely to be felled by a virus. As mathematician Dana Mackenzie put it in a blog post explaining the CDC data: “The elephant in the room is age, which is the single biggest risk factor for death due to COVID-19.”

No one is really arguing about all these facts. Leonhardt himself includes a (buried!) caveat to his headline conclusion about how the flip in death rate isn’t so dramatic if you look at people in the age groups 18-49, and 65 and up. This was arguably not a big enough caveat, or one that was high up enough in the piece; the age ranges were not selected such that they really highlighted the reality at play. But it was enough that Andrew Gelman, a statistician at Columbia who initially called for the NYT to correct Leonhardt’s column, after more careful consideration changed his tune. “The commenters have convinced me that it would be more accurate to describe the statement from the NYT article that COVID death rates have flipped to be ‘misleading’ rather than an ‘error,’” he wrote on his blog.

Instead of cold stats, the issue is one of framing. Leonhardt framed the CDC data so that it contained some shock value; epidemiologists stepped in to say, in so many more words, that this is not how they would view the data in a million years (as Mackenzie puts in her post: “The general answer [to Simpson’s paradox] espoused by introductory statistics textbooks is: control for everything. If you have age data, stratify by age.”). It is fair criticism. And while the newsletter might not be wrong, per se, it probably left many of its millions of readers with the wrong impression.