China revisited its zero-COVID policy, reducing
the severity of shutdown, quarantine and travel regulations.
Original equipment manufacturers (OEMs) and suppliers
continue to invest in electrification, publicizing their
electric vehicle (EV) and battery development plans.
Automotive inventory is at its highest level since April of
2021, but sales performance looks unpromising due to
economic conditions.

In this issue, A&M provides an update on crucial raw
material and freight prices, as well as the impact on OEMs and
suppliers as the selected topic for the December Industry
Focus.

In transaction news, VinFast and Zeekr have filed for
IPOs in the U.S., despite adverse market conditions.
BorgWarner plans to spin off two of its divisions,
creating an additional public company and slimming down its core
business. Lastly, strategic partnerships and joint ventures
continue to have an electric focus, propelling OEMs closer
to reaching net zero emissions.

In regulatory news, union activity has increased, as benefits,
labor and human rights become a topic of focus for automakers.

Additional December insights are included below.

Auto Forecast Solutions’ (AFS) latest numbers show that part
shortages, shutdowns and delays have resulted in approximately 4.4
million lost vehicles globally during calendar year 2022. Despite
recent improvements in November, North America has seen a late
surge in the current year for additional lost vehicles due to the
semiconductor shortage. Other regions including South America and
China may also cut their production outlooks in December, citing
continued chip supply issues and COVID-19 outbreaks, respectively.
The latest AFS estimates suggest approximately 4.6 million total
cars and trucks will be affected by chip-related disruptions in
2022, which ultimately brings the 2-year aggregate lost vehicle
total to roughly 15 million.

Electric vehicles remain too expensive for OEMs, suppliers, and
consumers. With roughly 40 percent of an EV’s cost being
attributable to its battery pack, the price and availability of raw
materials presents numerous long-term challenges to global-scale
manufacturing and mass EV adoption. The average electric vehicle
costs approximately $65,000, with the owner demographic largely
consisting of higher-earning individuals. It is important for
automakers to capture the EV market demand, but simultaneously
assess cheaper and more efficient alternatives for cleaner energy
in an EV future. 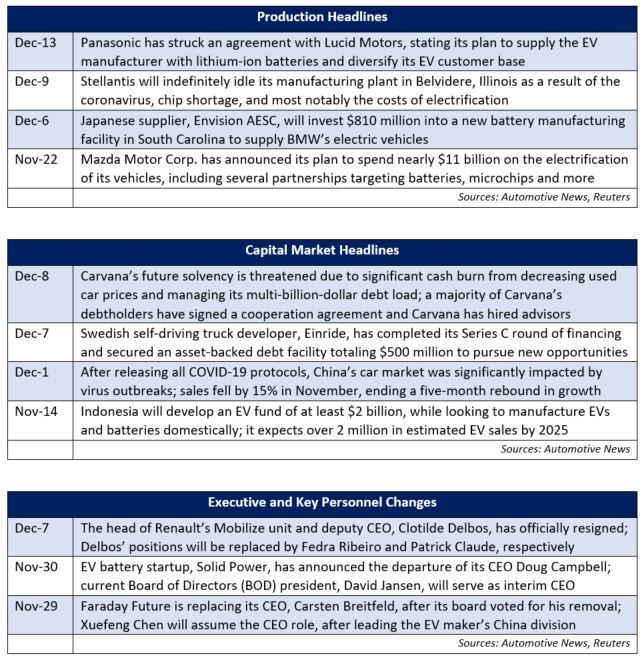 Automotive inventory increased by 106,000 units in November,
resulting in approximately 1.65 million total units. This
translates to a days’ supply (DS) of 37, which is 28 percent
below the five-year average. Inventory levels are up 46 percent
year-to-date, representing an approximate 521,000 unit increase in
the number of autos on hand. Despite the total inventory number
remaining below the historical industry norm by a margin of roughly
1 to 2 million vehicles, pickups and vans are recovering from their
COVID-19 low-points while passenger vehicles lag behind. The lower
inventory levels are most heavily concentrated among Japanese and
Korean automakers, as U.S and European automakers continue to get
much closer to five-year average levels. As macroeconomic pressure
continues to grow, the near-term demand remains uncertain and may
result in a continued increase of cars on dealer lots.

New light vehicle sales in the U.S. increased 7.8 percent
year-over-year in November with a 14.1 million seasonally adjusted
annualized rate (SAAR) of sales, while the full-year sales pace is
tracking at 13.6 million units. This would be the third year in a
row that light vehicle sales in the U.S. will be below 14 million
units. Industry disruptors, such as supply chain issues and plant
shutdowns, will likely stretch into the new year, hampering
production and limiting inventories when compared to the
industry’s pre-pandemic average. Although sales have increased
year-over-year in each of the last three months, the overall sales
weakness in 2022 was due to a constricted inventory environment,
which is expected to continue into 2023 and further affect car
sales. Average transaction prices also increased year-over-year in
November, resulting in a 2.8 percent increase to $45,290 per
vehicle. 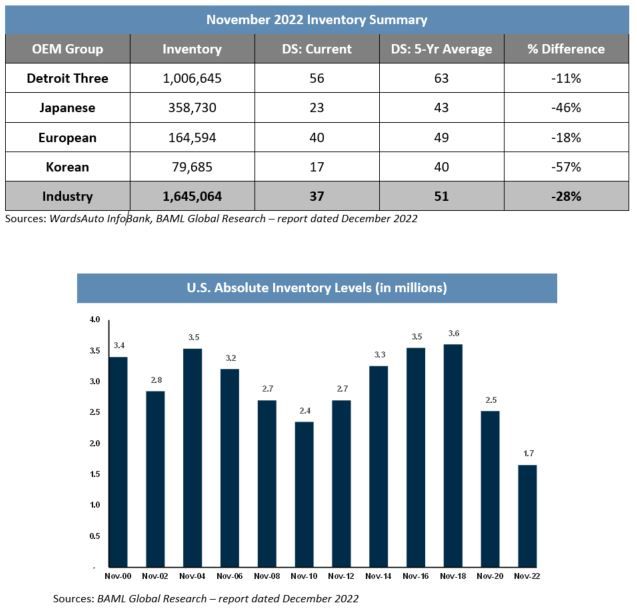 OEMs and suppliers have been continuing to battle unfavorable
and consistent disruptions to the industry ever since the onset of
COVID-19, especially the costs of raw materials and freight. As
automakers continue to shift to EVs, the pricing of essential
vehicle inputs and transportation costs will be a crucial component
to successfully transition.

In this month’s industry focus section, A&M revisits the
pricing for key raw materials and freight in the automotive
industry and the respective impact as OEMs continue to push into
developing EVs.

The automotive industry uses a variety of raw materials to
manufacture vehicles, many of which have seen increased levels of
demand and shortages of supply, especially in wake of the movement
to electrification. The purchasing environment has seen significant
developments in the last year, as some OEMs have struck deals to
land supply contracts for these critical resources. Despite these
contracts, auto companies still must purchase several of these
commodities based on market prices, in addition to many suppliers
buying these raw materials directly from the OEMs themselves.
Although several of these metal and material prices have decreased
from their record highs, OEMs and suppliers are still operating in
a heightened pricing environment when compared to historical
levels, impacting margins and profitability in a period of
increased capital expenditures and investments for EVs and
batteries.

See the chart below for key raw materials and their respective
prices and cost increase over the last 3 years. 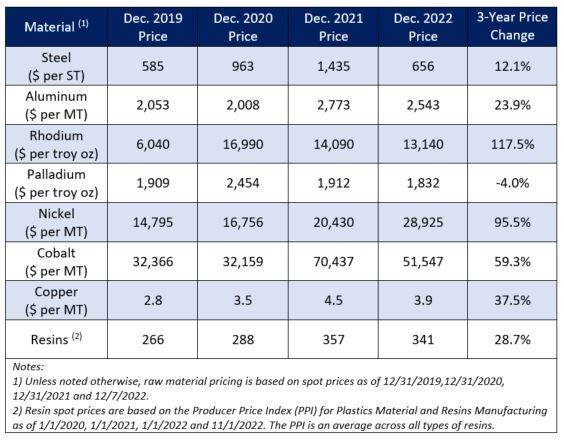 The automotive industry has a complex and global supply chain,
which has endured substantial logistical problems since 2020. The
shipping industry has experienced high levels of volatility over
the past three years, seeing record high costs resulting from
COVID-19 that was shortly followed by softened demand, supply
growth and reduced pricing power. Auto and parts manufacturers
heavily rely on timely shipping and container prices to effectively
meet production schedules and consumer demand.

According to the World Container Index (WCI), container rates
have decreased by nearly 80 percent since October of 2021 to
$2,138.70 per 40-foot container. At the same time, the number of
containers is expected to grow by 29 percent of the current world
supply, creating an imbalance of supply and demand that is
projected to recover in 2024. These matters, coupled with
inflationary pressures, will likely present favorable pricing to
automakers and suppliers over the near-term, while they continue to
battle other elevated operational costs.

The chart below displays the WCI, which reports spot freight
rates for 40-foot containers on eight of the major global trade
routes. 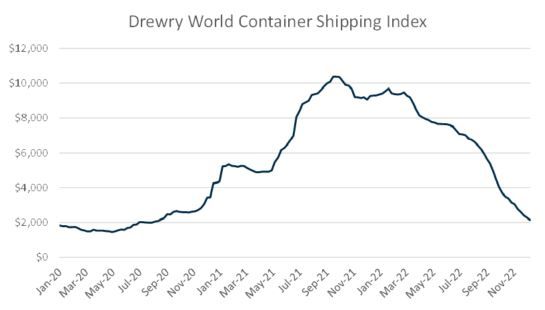 In recent transaction news, IPO activity proves to be resilient
amid the current economic landscape as EV manufacturers VinFast and
Zeekr plan to go public in the U.S. in 2023, both seeking
valuations of approximately $1 billion. Additionally, BorgWarner
has announced its intention to spin off its fuel systems and
aftermarket segments into a separate publicly traded company, while
focusing on its legacy business that will consist of its electric
propulsion, drivetrain, and air management divisions. Lastly,
Navistar and TuSimple have ended their deal to co-develop
autonomous trucks, and Rivian and Mercedes are pausing their JV for
manufacturing electric vans in Europe.

See below for additional detail on recently announced
transactions.

Hertz Settlement: Car rental company, Hertz,
has recently stated that it will resolve approximately 95 percent
of outstanding customer claims through a $168 million dollar
settlement. The claims originate from errors in filing wrongful
vehicle theft reports. The settlement will be mostly covered by
insurance reimbursements, having a minimal impact on the
company’s capital return.

Autoneum Plant Strike: Autoneum, a Swiss-based
sound and heat insulation systems supplier, recently had 270
workers go on strike at its manufacturing plant in Pennsylvania in
response to an unfavorable union contract offer. The week-long
strike was ultimately resolved, preserving the current cost
structure for Autoneum and improving employee benefits.

NHTSA Vehicle Safety Probe: The U.S. National
Highway Traffic Safety Administration has opened up new safety
probes into over 2 million Honda, Jeep and Ram vehicles. While no
crashes or injuries have been reported, the agency is investigating
several issues that include loss of vehicle power, braking systems,
and hydraulic control units.

UAW & International Labor: The United Auto
Workers Union (UAW) is pushing automakers to move their supply
chains out of the Xinjiang region in China. A new report shows that
nearly every OEM has meaningful exposure to auto products being
produced from forced labor. As a result, the UAW is fighting to
establish an industry supply chain that protects labor, human
rights and the environment.

The content of this article is intended to provide a general
guide to the subject matter. Specialist advice should be sought
about your specific circumstances.