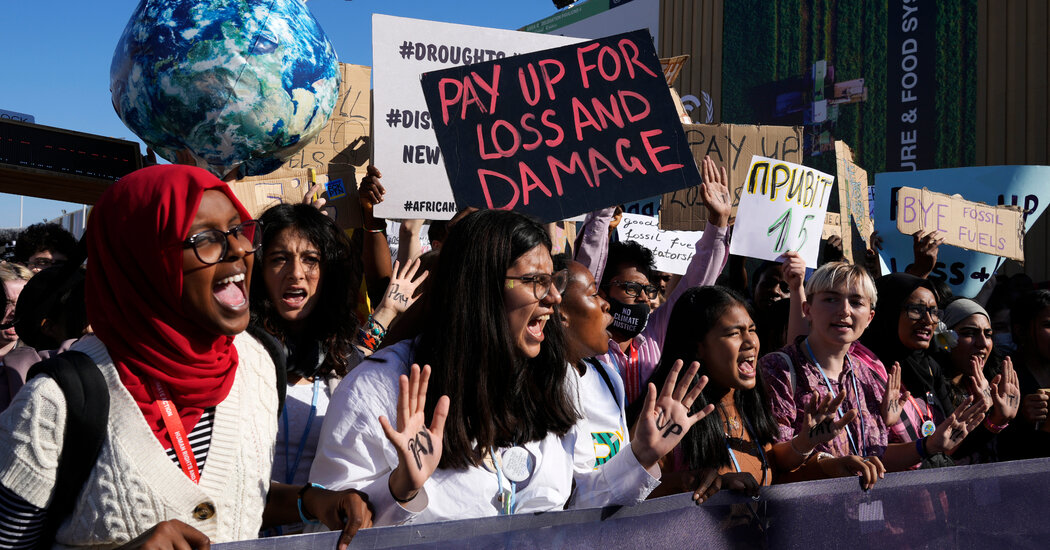 Debate intensified over a contentious issue: the creation of a fund to help poor and vulnerable countries pay for loss and damage caused by climate change.

SHARM EL SHEIKH, Egypt — John Kerry, the United States special envoy for climate change, has tested positive for Covid-19, a State Department spokeswoman said, a development that will sideline him at a crucial moment in the waning hours of negotiations at United Nations climate talks.

Mr. Kerry, 78, tested positive for the coronavirus on Friday morning and worked from his hotel all day, said his spokeswoman, Whitney Smith, who described Mr. Kerry’s condition as “mild.”

“Secretary Kerry is self-isolating after testing positive for COVID-19 in Sharm el-Sheikh, Egypt,” Ms. Smith said in a statement. “He is fully vaccinated and boosted and experiencing mild symptoms. He is working with his negotiations team and foreign counterparts by phone to ensure a successful outcome of COP27.”

No one else in the United States delegation has tested positive, Ms. Smith said. Kerry was at an event on Thursday to discuss methane emissions and complained of a scratchy throat. He had spent at least an hour speaking one-on-one with his Chinese counterpart, Xie Zhenhua, 73, inside the Chinese delegation’s office at the summit on Thursday evening. A spokesman for Mr. Xie did not return a request for comment.

Mr. Kerry’s illness came as the climate talks spilled into overtime on Friday and countries were under intense pressure to strike a deal. In the final hours, it often comes down to face-to-face deal making. At the Glasgow talks last year, Mr. Kerry was in the center of the scrum, jousting and sparring with other diplomats to forge a compromise.

In Egypt, negotiators from nearly 200 countries have been struggling to agree on the summit’s most contentious issue: whether wealthy, industrialized nations should create a new fund to pay poor countries for “loss and damage” caused by global warming.

The United States, historically the world’s biggest polluter, has resisted the idea of compensation for climate-related disasters, fearing it could face unlimited liability. But the country has faced heavy pressure to change its stance after the European Union and a vocal group of developing countries had backed different plans to establish a new fund as early as this year.

The State Department did not comment publicly on the latest proposals.

“The U.S. is a key obstacle,” Susana Muhamad, Colombia’s environment minister, said. Without American support, “the conversation here cannot evolve,” she said. “It is taking up all the air at the conference.”

State Department officials were scrambling to figure out how Mr. Kerry might still participate in talks on Saturday, whether he could be available through a video feed.

Even after the United States enacted landmark clean energy legislation this year and Mr. Biden appeared at the summit to reaffirm American leadership in the fight against climate change, the debate over loss and damage has proved acrimonious and put Mr. Kerry in a corner.

What Happened at the COP27 Climate Summit

The annual United Nations climate talks, which were held in Egypt this year, concluded on Nov. 20.

Part of the problem is a poor track record. The United States and other wealthy countries have failed to live up to a decade-old promise to mobilize $100 billion annually to help poorer nations shift to clean energy and adapt to climate hazards, and angry leaders from developing countries are staking the summit’s success on the thorny issue of money.

“Clearly trust levels are low,” said Nigel Topping, who was appointed by Britain and the United Nations as a “high-level champion” to help facilitate the climate talks. If nations are unable to agree on some form of climate funding, he said, “there will be a lot of angry responses from the most vulnerable.”

Other major sticking points remained, including whether to call for a worldwide “phase-down” of all fossil fuels, the burning of which is dangerously heating the planet. Disputes also lingered over which countries needed to do more to slash their greenhouse gas emissions, as well rules for the fast-growing global market in carbon offsets.

With the two-week summit scheduled to end on Friday, staff members at the convention center in this Red Sea resort town began removing coffee machines and dismantling climate-themed exhibits. But bleary-eyed negotiators braced for talks to drag through the weekend, with some delegations fretting about changing flights and extending hotel reservations.

Any agreement requires the approval of representatives from nearly 200 nations; if one country objects, an entire deal can collapse.

“Time is not on our side,” said Sameh Shoukry, Egypt’s foreign minister, who is acting as the conference’s convener and trying to shepherd negotiations to a conclusion.

A draft agreement released on Friday morning indicated where countries might find common ground. It urged nations to keep global average temperatures from rising more than 1.5 degrees Celsius (2.7 degrees Fahrenheit) above preindustrial levels. That’s the threshold beyond which scientists say the likelihood of catastrophic climate effects significantly increases. Earlier in the week, some countries worried that the summit would abandon that target.

But regarding loss and damage, the summit’s most contentious issue, talks remained deadlocked.

Scores of poor, developing countries face irreversible damage from climate change even though they have done little to cause the crisis. By some estimates, the damage could top $580 billion per year by 2030 and $1.7 trillion by 2050. And, leaders from those countries say, it is only fair that financial help should come from wealthy countries that have pumped most of the planet-warming greenhouse gases into the atmosphere.

For the first time at this summit, the issue of climate compensation was placed on the formal agenda, and negotiators from almost every country — some continent-size, others tiny islands, some fabulously wealthy, others deeply impoverished — have sparred over several options. Those options included establishing a fund this year, delaying it by a year or agreeing to work on new climate aid for developing countries through existing institutions like the World Bank or the Green Climate Fund.

A group of 77 developing nations demanded that a fund be created before next year’s summit to provide aid to a range of developing countries. It would be supplied by industrialized countries such as the United States, Europe, Japan and Canada, with the details to be worked out at future summits.

“We are very clear that we see this as a climate justice issue,” Sherry Rehman, Pakistan’s minister for climate change, said.

Pakistan is facing more than $30 billion in damages as a result of catastrophic floods this summer that left one-third of the country underwater and affected more than 33 million people. “These are huge sums for countries that are drowning in debt and climate-driven floods and catastrophes,” she said.

Late on Thursday night, the European Union offered an alternative plan to establish a fund this year that would focus on providing aid to only the most vulnerable countries, such as low-lying island states or especially poor countries in Africa.

It would also draw contributions not just from the United States and Europe, but other large emitters like China and Saudi Arabia that were categorized as “developing” when the U.N. climate treaty was approved in 1992 but have since exploded in emissions and wealth. China is currently the world’s biggest emitter of greenhouse gases and has the second-biggest economy.

“Some countries that at the time were considered developing are now part of the top economic performers in the world,” Frans Timmermans, the lead negotiator for the European Union, said. He said “it’s only fair” that wealthy Group of 20 countries make contributions.

So far, a variety of European nations have voluntarily pledged more than $300 million to address loss and damage, with most of that money going toward a new insurance program to help countries recover from disasters like flooding. Poorer countries have praised those early efforts while noting that they are only a fraction of what is needed.

China, for its part, has suggested that it might be willing to make voluntary contributions for loss and damage. But on Thursday, one of its delegates insisted that now was “not the time to rewrite” the 1992 climate treaty — a sign that the country was hesitant to be required to provide climate funding.

Mr. Kerry has said the United States recognized “the responsibility” to channel more money to countries experiencing climate disasters. Mr. Kerry has said he is committed to finding a way to get countries new funding. But he has only indicated a willingness to support vague “financial arrangements” and has raised concerns about establishing a fund before further discussion of details about how would it work. As a practical and legal matter, it would be incredibly difficult to try to determine who owes what and to whom.

“Not a lot of people I know want to sign off on something that’s not even fully defined,” Mr. Kerry said.

The talks are taking place during simultaneous crises. Worries that countries will backslide on plans to reduce their use of fossil fuels have shadowed the summit, largely because of a global energy crisis precipitated by Russia’s invasion of Ukraine that forced some countries to seek out coal and other alternatives to Russian gas. Inflation rates have soared around the world. And a warming planet has intensified deadly floods in places like Pakistan and Nigeria, as well as record-breaking heat and drought across Europe, Asia and Africa that have pushed millions to the brink of famine.

At the same time, there have been some recent bright spots. Climate discussions between the United States and China, which Beijing suspended in August, have started again. Leaders of the 20 biggest economies last week reaffirmed support for keeping the rise in global temperatures below 1.5 degrees Celsius.

The most poignant moment in Friday’s negotiations occurred when a 10-year-old Ghanaian girl named Nakeeyat Dramani took the floor at the conference’s large plenary hall.

Speaking as a representative of a group of vulnerable countries, she noted that world leaders, including Mr. Kerry, “have been really nice to me.”

But kindness wouldn’t solve the math of climate change, she said, and with every ton of greenhouse gas emissions, industrialized countries owed more to countries like Ghana that have contributed barely a smidgen.

“When can you pay us back?” she asked. “Because payment is overdue.”