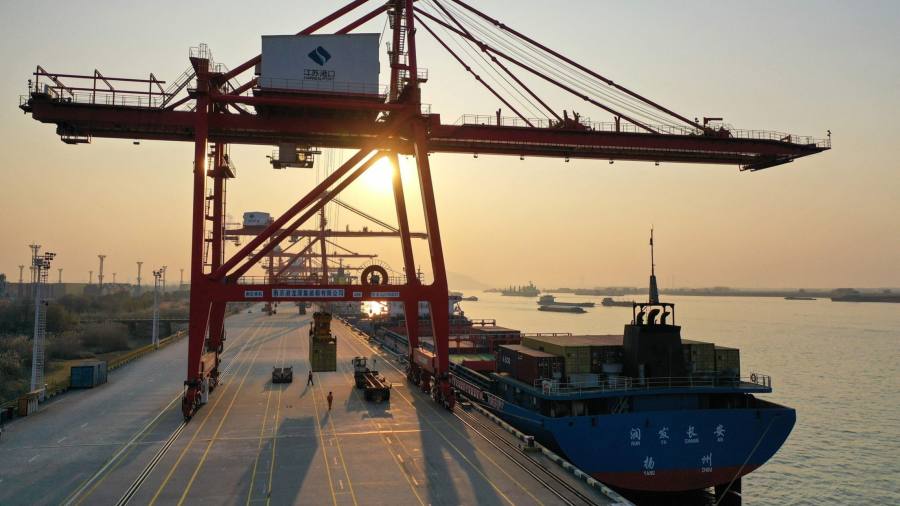 China’s exports suffered the sharpest decline in almost three years in December, piling on further economic pressure as policymakers in Beijing grapple with sluggish economic growth and a nationwide outbreak of Covid-19.

Exports declined 9.9 per cent year on year in dollar terms in December, according to official data released on Friday by China’s general administration of customs, worse than November’s 8.7 per cent fall but slightly outperforming expectations of an even greater contraction. Imports slid 7.5 per cent last month, up from a 10.6 drop the month before.

For the full year, China’s trade surplus hit a record of $878bn on the back of a pandemic-era boom that boosted its exports.

But exports have now declined year on year in each of the past three months as global demand slowed and Covid outbreaks swept through the country.

Exports to the US and EU slumped 18 and 20 per cent respectively, as rising interest rates damped appetite for Chinese goods, Goldman Sachs analysts noted, at the same time that Beijing began to dismantle its costly zero-Covid policy of lockdowns, mass testing and mandatory quarantines.

“The bottom line is that after serving as China’s growth driver in the past three years, this year external demand will be a major drag to the Chinese economy,” said Larry Hu, chief China economist at Macquarie.

China will publish its gross domestic product growth figures for the full year on Tuesday and is widely expected to miss a 5.5 per cent target that was already the lowest such figure in decades.

Although its zero-Covid strategy imposed severe economic costs, the country’s sudden reopening has led to hundreds of millions of infections in a matter of weeks, according to internal government estimates, ushering in a period of severe disruption.

Economists are closely watching the impact of the reopening on domestic economic activity, which is expected to eventually rebound. Factory activity in December fell by the most since the start of the pandemic, according to official purchasing managers’ index data, though a private survey showed a less severe impact.

Hu forecast an acceleration in growth this year to 5.5 per cent, with a simultaneous drop in exports and strengthening of domestic demand.

Zhiwei Zhang, chief economist at Pinpoint Asset Management, said the weak export growth “highlights the importance of boosting domestic demand as the key driver for the economy in 2023”, adding that the market “anticipates more policies to boost domestic consumption”.

In contrast to exports, which surged during the pandemic, consumption in China was stifled by frequent lockdowns. Retail sales, a gauge of consumer demand, which will also be released on Tuesday, turned negative in October and fell 5.9 per cent in November as authorities struggled to contain multiple Covid outbreaks.

The government has in recent months unveiled measures to support its ailing property sector in a sign of growing urgency over the economy’s weakness.