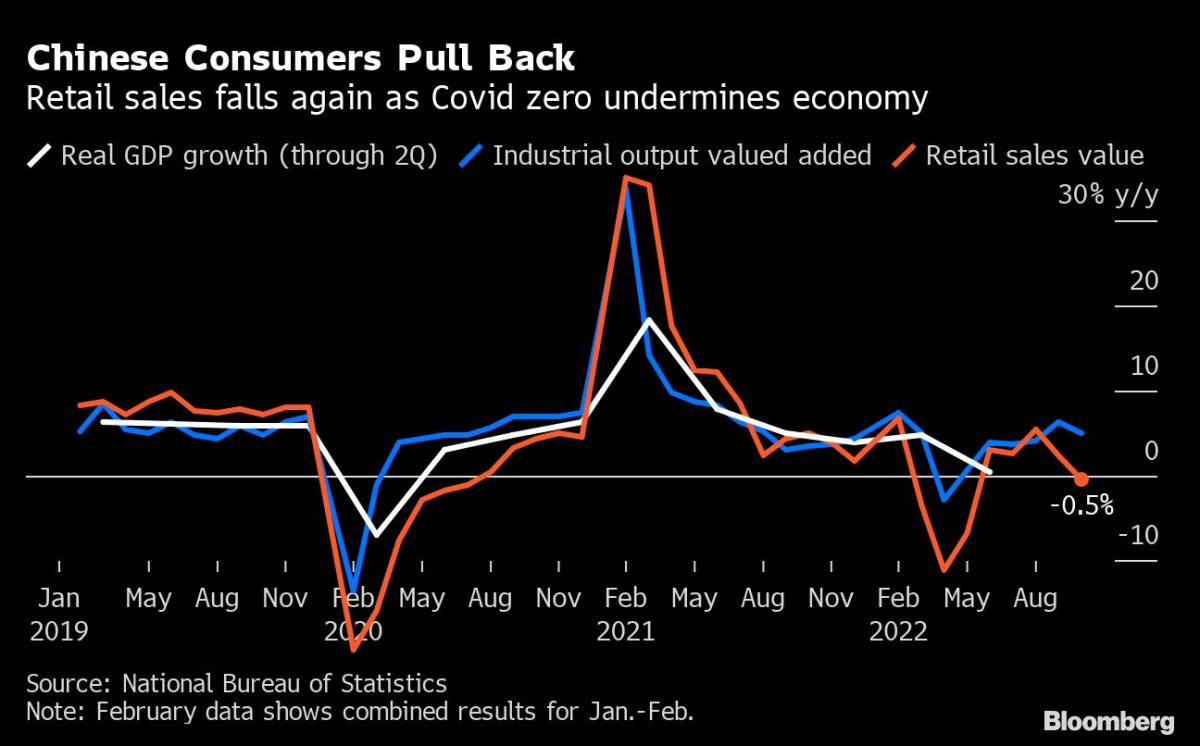 (Bloomberg) — China’s economy weakened in October as worsening Covid outbreaks across the country hurt consumer sentiment and disrupted business activity while a slump in the property market showed no signs of easing.

Retail sales contracted for the first time since May, dropping 0.5% from a year earlier, the National Bureau of Statistics said Tuesday. The median estimate in a Bloomberg survey was for 0.7% growth.

Growth in industrial output slowed to 5% from 6.3% in September, below the median estimate of 5.3%. Fixed-asset investment increased 5.8% in the first 10 months of the year, slightly below expectations. The surveyed jobless rate was unchanged at 5.5%.

Covid cases soared in October, with authorities tightening controls to combat infections ahead of the Communist Party’s congress, including shutting businesses and discouraging travel during the weeklong National Day holidays.

The government has taken more concerted steps in recent days to reduce the economic burden of the Covid Zero policy and also rescue the property market. However, the measures are unlikely to provide a significant lift to growth just yet given plummeting business and consumer confidence.

China’s benchmark CSI 300 Index of stocks gained 0.8% as of 10:27 a.m. local time. The yield on 10-year government bonds dropped 2 basis points after jumping in the previous two sessions. The yuan traded 0.25% stronger in the onshore market at 7.0532 per dollar.

The NBS said the foundation for the economy’s recovery is not yet strong, adding that China will “scientifically and efficiently” coordinate Covid controls and economic development.

Covid Zero and a sinking property market “have made the recovery increasingly vulnerable, especially now that exports are contracting. The raft of policy shifts in recent days is unlikely to turn the tide immediately, but risks are now pointing more to the upside for next year’s growth.”

Aside from Covid controls and a property slump, other former growth pillars are also struggling: bank lending is at the lowest in five years and exports dropped in October for the first time since May 2020.

Infrastructure investment was a bright spot, expanding 8.7% in the first 10 months of the year from a year earlier, as the government ramps up stimulus. Property investment continued to weaken though, contracting 8.8% in the period.

China’s growth outlook into next year remains uncertain given its Covid policy. Economists in a Bloomberg survey say China’s exit from pandemic-era restrictions and controls could run through the end of 2023, with reopening only starting sometime from April. Annual GDP growth is expected to slow to 3.3% this year and rebound to 4.8% next year, according to economists surveyed by Bloomberg.

Authorities are stepping up support measures to help businesses. On Monday, the central bank announced a loan repayment holiday for smaller companies that have been hit by Covid restrictions. The banking regulator also allowed property developers to access more of the money homebuyers pay in advance for homes.

At the same time, the People’s Bank of China on Tuesday injected less cash than expected via one-year loans this month but supplemented it with other liquidity tools to ensure ample cash levels in the banking system to boost the economy. Some economists still expect the PBOC to lower the reserve requirement ratio, or the amount of cash banks must keep in reserve, to aid the economy.

“It is still possible that the central bank may lower the reserve requirement ratio in the fourth quarter to showcase it’s loosening to boost the economy,” said Larry Hu, head of China economics at Macquarie Group Ltd.

–With assistance from Fran Wang.

(Updates with comments from economists)