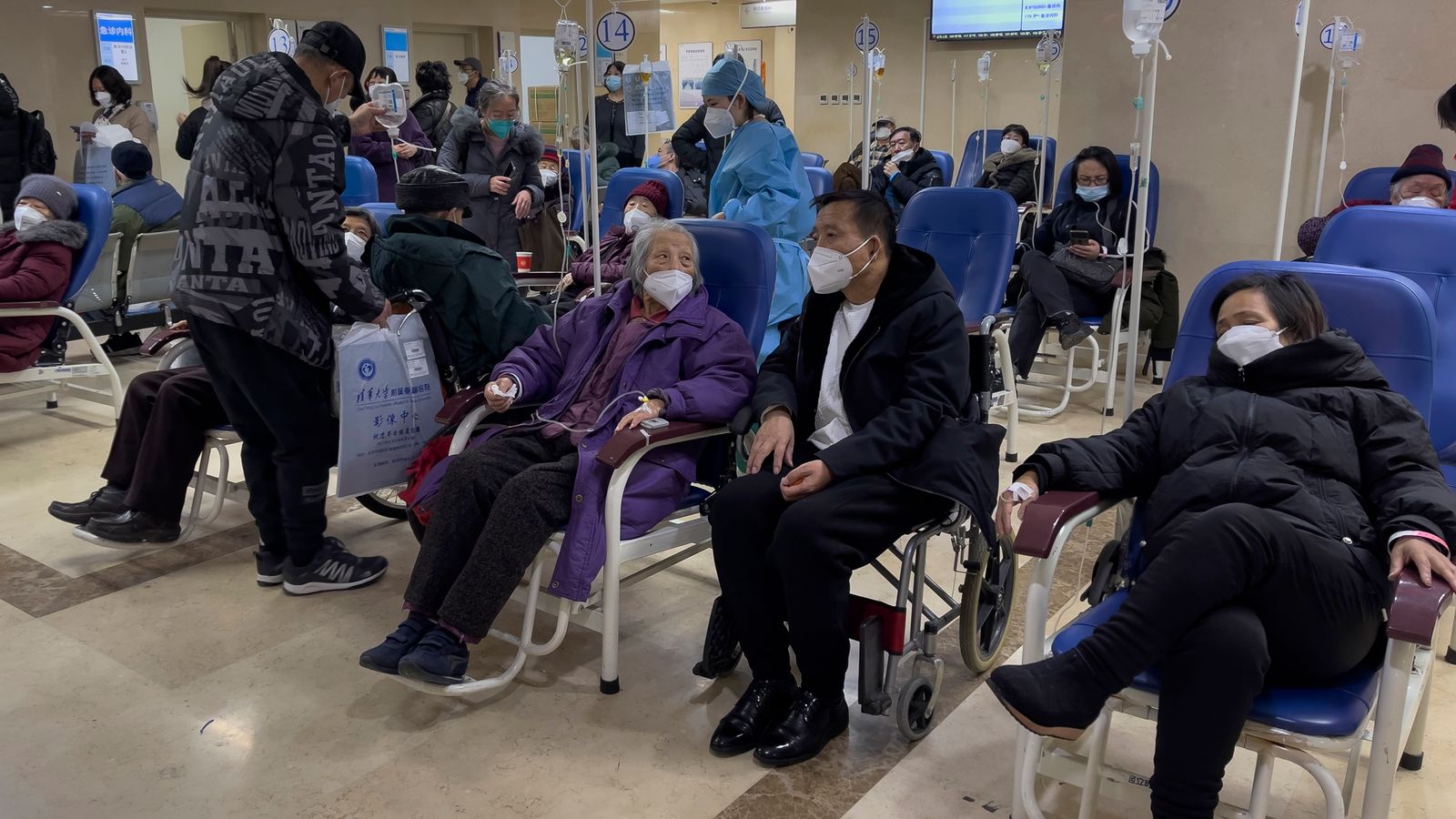 This week marks three years since the Chinese authorities moved to lock down and isolate Wuhan, a city of more than 11 million people, in response to the initial emergence of the then little-understood coronavirus now known as COVID-19.

It is clear that a colossal calamity has unfolded since the Beijing regime fully scrapped that policy, later termed Zero-COVID, on December 1. While the government has so far reported 73,000 deaths—itself a staggering figure—this week’s modeling estimates by the British-based analytics firm Airfinity indicate that more than 700,000 people have died already.

Maligned by the Western powers and media from the outset, for three years the Zero-COVID policy repeatedly contained and eliminated infection transmissions in China’s major metropolises. This policy, maintained due to public demand for protection from the catastrophe that capitalist governments let loose globally, was an historic achievement.

It demonstrated that it is possible to stop infection through masking, testing and contact tracing, temporary lockdowns and closures of schools and nonessential businesses, mass vaccination and other safety measures.

Now, a terrible price is being paid by the Chinese masses for the regime’s abandonment of that policy in what amounts to a craven capitulation to the demands from giant corporations like Apple and imperialist governments, especially the United States, to fully reopen the Chinese economy for the sake of corporate profit.

For more than two years, US imperialism exerted unrelenting pressure on China to lift its Zero-COVID policy, as part of Washington’s intensifying efforts to militarily encircle and subjugate the country. Countless columns and editorials denounced China’s public health policies for its impact on the global capitalist economy, demanding they be scrapped no matter what the cost in human lives.

This cost was fully known in advance. A study published in May 2022 found that if Omicron were allowed to spread freely in China, in just six months there would likely be 112 million symptomatic cases, 5.1 million hospital admissions, 2.7 million ICU admissions and 1.6 million deaths.

That disaster is now underway. The fraud of “herd immunity” has been inflicted on China’s population faster than anywhere else in the world. In seven weeks, the country has gone from just over 5,000 deaths to more than halfway toward the highest level of deaths, that of the US, where 1.128 million people have perished, according to the latest Worldometer count.

While the true scale of the unfolding disaster may never be known with precision, what is happening can only be called a policy of social murder on a massive scale. A horrifying toll has been inflicted since December 1, which is now spreading to the rural masses as millions of migrant workers return from the cities to their home villages for the Lunar New Year festivities.

According to Airfinity’s calculations, which have been largely buried in the mass media, COVID-19 infections could peak at 4.8 million per day, with deaths reaching 36,000 a day on January 26. The daily toll would be more than double that of the deaths per month in the American Civil War.

This is a monumental crime, not only against the Chinese working class but their fellow workers internationally. As health experts have warned, the unconstrained spread of the virus in China increases the likelihood that further, possibly more transmissible and deadly mutations of the coronavirus will evolve internationally.

This will take the global pandemic to a grave new stage. Already, over the past three years, according to excess death estimates, more than 21 million people have died directly or indirectly from COVID-19, approximately equal to the total military and civilian deaths during the four-year carnage of World War I.

The Beijing authorities claim that China’s death toll is far lower than the published estimates, even while declaring that the pandemic has quickly infected 80 percent of the country’s 1.4 billion people, that is, 1.1 billion victims.

China’s Center for Disease Control and Prevention (CDC) this week reported some 13,000 deaths related to COVID-19 in hospitals from January 13 to 19, adding to the almost 60,000 it reported in the six weeks before that. Yet that data excludes those who died at home, and families and health professionals have reported official pressure not to list COVID-19 on death certificates.

Perversely, Dr. Wu Zunyou, the chief epidemiologist at China’s CDC, and the Chinese government have used the admission that 80 percent of people have been infected to falsely declare, as have governments around the world, that most people are therefore safe from reinfection.

This flies in the face of the indisputable scientific evidence that COVID-19 reinfections, which have become increasingly common worldwide, multiply the risk of hospitalisation and death. The rapid evolution of new variants also undermines the effectiveness of vaccines and immunity acquired from previous infections.

Having for three years implemented a Zero-COVID policy that repeatedly shut down transmissions, Beijing is now echoing the same lies and propaganda that Western governments have used to justify their own criminal “let it rip” policies.

From President Xi Jinping down, Chinese authorities are cynically urging the population to believe that the worst of the pandemic is over and to return to “normal” life, including by celebrating, spending and travelling for the New Year Spring festival. Mass infection is being undertaken in order to revive the economy, which slumped to a 3 percent growth rate last year, the lowest since the beginning of the 1990s.

The People’s Daily, the Communist Party’s official newspaper, positively boasted that 110 million railway passenger trips were made from January 7 to 21, the first 15 days of the 40-day Lunar New Year travel period. Most of these travelers are visiting their families in rural areas, where access to medical care and medications is particularly poor, making further widespread infection inevitable.

Reports continue to emerge of overwhelmed hospitals and morgues and acute shortages of medicines. Online, despite state censorship to block “gloomy sentiments,” there are numerous reports of personal tragedies—stories of people contracting COVID-19, struggling to source medication or health care and losing elderly relatives to the disease.

Clearly aware of the shock and discontent, in his Spring Festival message Xi claimed that his government was committed “to putting the people and lives above all else”—while “minimising the impact of COVID-19 in the economic and social fields.” He then exhorted people to create a better future through “solid work.”

How and why has this catastrophe happened? While the Chinese regime bears an immense historic responsibility, it has acted at the behest of the major capitalist powers and transnational corporations. Apple, Nike and other companies threatened to move their production plants to other countries. Small middle-class protests in November against COVID-19 restrictions were trumpeted by the Western media and seized on by the Chinese Communist Party bureaucracy to dismantle all protections against the spread of the virus.

To reassure the global elite, China’s Vice Premier Liu He appeared before the world’s billionaires at the annual World Economic Forum in Davos last week to inform them that China was open for business because “life has been restored to normal in China.”

At the same venue, by contrast, along with more than 5,000 armed guards to keep the gathering safe from protests, every conceivable means was taken to protect the participants against COVID-19 infection. That included vaccination with the latest booster jabs prior to their arrival, mandatory PCR tests, free N95 masks, state-of-the-art ventilation and HEPA air cleaners, and UV lights and disinfection systems.

The CCP’s dismantling of Zero-COVID to meet the requirements of the global conglomerates and finance giants shows that there is no solution to the disaster within national borders.

The very fact that China suppressed the virus for three years but faced the constant threat of the reintroduction of COVID-19 from abroad testifies to the criminal character of the response to the pandemic in the advanced capitalist countries, above all, in the US and the European Union.

By refusing to implement the elimination strategy pioneered in China, the capitalist elites and their political representatives are responsible for the mutation of SARS-CoV-2 into evermore infectious and immune-evading variants, from Alpha to Omicron and whatever comes next.

A globally unified effort led by the international working class, armed with accurate information provided by principled scientists and medical professionals, is essential to eliminate COVID-19. The profit-driven world capitalist system itself threatens the future of humanity, not just through the pandemic, but also through climate change, ever-increasing social inequality and the threat of World War III.

The shocking death toll in China underscores the warning that the WSWS issued in its New Year statement: “In their promotion of ‘herd immunity’ as a legitimate response to the pandemic and in their willingness to risk nuclear war in a confrontation with Russia, the imperialist powers are demonstrating a homicidal contempt for the lives of the great mass of the world’s population. Only the intervention of the working class, armed with an international socialist program, can provide humanity with a way out of the disaster created by capitalism.”

Join the fight to end the COVID-19 pandemic

Someone from the Socialist Equality Party or the WSWS in your region will contact you promptly.