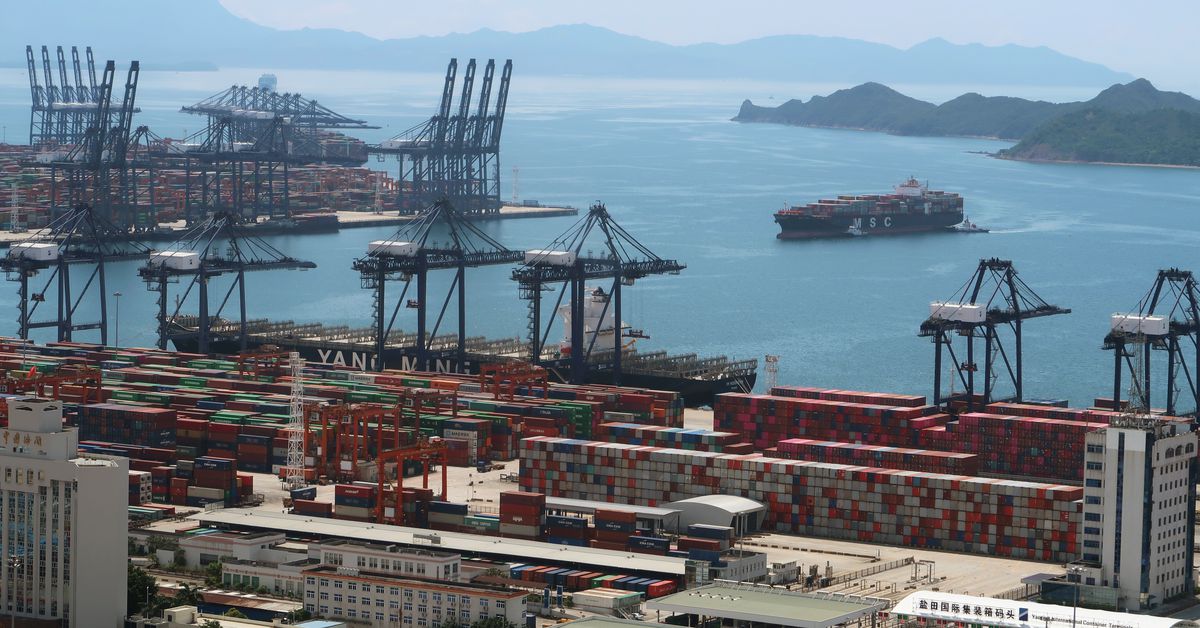 BEIJING, June 9 (Reuters) – China’s exports grew at a double-digit pace in May, shattering expectations in an encouraging sign for the world’s second biggest economy, as factories restarted and logistics snags eased after authorities relaxed some COVID curbs in Shanghai.

Imports also expanded for the first time in three months, providing welcome relief to Chinese policy makers as they try to chart an economic path out of the supply-side shock that has rocked global trade and financial markets in recent months.

Still, China’s trade outlook remains hostage to global risks, including from high raw material costs, uncertainties from the Ukraine war and slowing overseas demand. Recovering production in other economies and a shift of global spending from goods to services could also affect demand for Chinese goods.

Outbound shipments in May jumped 16.9% from a year earlier, the fastest growth since January this year, and more than double analysts’ expectations for a 8.0% rise. Exports were up 3.9% in April.

Imports, on the other hand, rose 4.1% in May from a year earlier, the first gain in three months and compared with flat growth in April. They were expected to rise 2.0%.

“In May, logistics and supply chains were well repaired, so from the view of supply, unfavorable factors which weighed down export growth in April have greatly eased, leading to a jump in teh year-on-year growth last month,” said Zheng Houcheng, director of the Yingda Securities Research Institute.

To stabilise the situation in a politically sensitive year, the State Council has called on local officials to revive supply chains, restore economic growth and rein in unemployment. Major automakers have been able to ramp up production in May and cargo handling capacity at ports and airports are returning closer to pre-lockdown level.

Electric car maker Tesla (TSLA.O) reopened its factory in Shanghai on April 19 after a 22-day stoppage, and returned to pre-lockdown production levels in late May.

The Shanghai port, which was running at severely reduced capacity in April, has also been handling more cargos since last month, with official data showing that daily container throughput at the world’s biggest port back to 95.3% of the normal level in late May.

Official and private surveys showed China’s factory activity contracted at a slower pace in May as COVID-19 curbs in major manufacturing hubs eased, with a gauge on export orders improving.

China’s cabinet recently announced a package of 33 measures covering fiscal, financial, investment and industrial policies, although analysts say the official GDP target of around 5.5% for this year will be hard to achieve without doing away with the zero-COVID strategy.

The central bank in May cut its benchmark reference rate for mortgages by an unexpectedly wide margin, its second reduction this year as Beijing seeks to revive the ailing housing sector to prop up the economy. read more

First-quarter gross domestic product (GDP) expanded by 4.8% from a year earlier, but analysts expect growth this quarter would take a heavy hit due to the lockdowns in Shanghai, with some economists warning the risk of recession is rising.