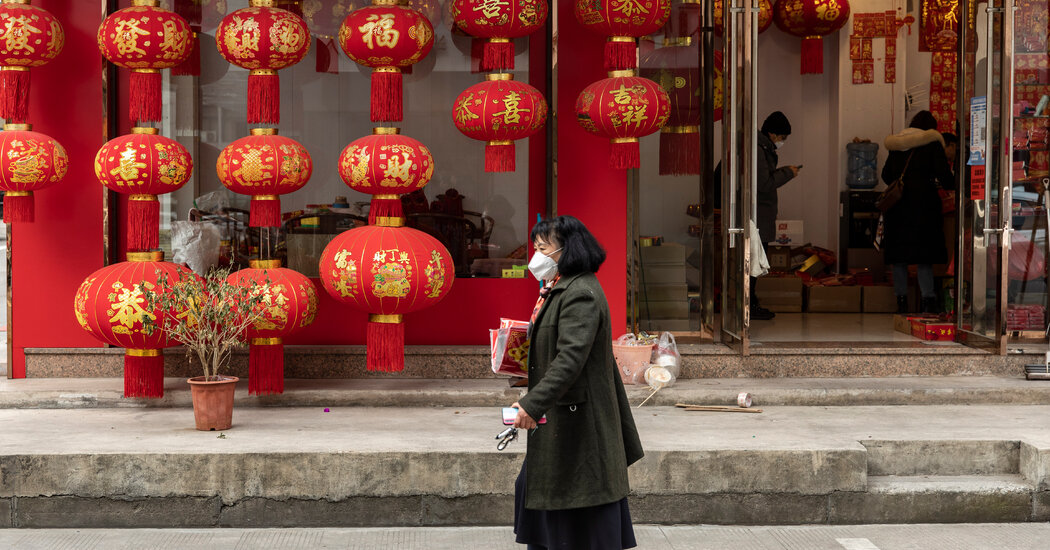 New government data shows that growth for the year fell far short of Beijing’s goal. With Covid curbs lifted but the pandemic’s course uncertain, hope and fear cloud the forecast.

The Chinese economy had one of its worst performances in decades last year as growth was dragged down by numerous Covid lockdowns followed by a deadly outbreak in December that swept across the country with remarkable speed.

China grew 3 percent for the year, numbers released Tuesday show, less than half what it was in 2021 and far short of Beijing’s target of 5.5 percent. Other than 2020, it was the most disappointing showing since 1976, the year after the death of Mao Zedong when the economy declined 1.6 percent.

On Dec. 7, China lifted without warning its strict “zero Covid” restrictions after nearly three years. Within weeks, the virus had infected hundreds of millions of people, straining hospital wards and funeral homes, and leaving factories, offices and restaurants bereft of workers and customers.

The policy reversal by Xi Jinping, China’s top leader, while paralyzing the economy in December, has sparked hope that it will regain its footing later this year. Whether it does is of great significance to the rest of the world. China’s consumers are an almost irreplaceable source of revenue for homegrown and foreign companies. Its factories produce a greater share of the world’s manufacturing output than the United States, Germany and Japan combined. The Chinese Communist Party has depended on growth for political legitimacy.

Despite the blow inflicted by “zero Covid,” China appears to have grown faster last year than major rivals like the United States, Japan and Germany, all of which are estimated by economists to have expanded less than 2 percent last year.

In the decade before the pandemic, China’s economy was one of the world’s most dynamic, growing an average of 7.7 percent a year. But in the last three months of 2022 growth sputtered to 2.9 percent, a come down from the previous quarter.

Chinese officials insist that the economy will rebound after infections peak. Traffic jams have reappeared and subway trains are increasingly full in Beijing and Shanghai. Shops along Shanghai’s famous Nanjing Road, the Fifth Avenue of China, are no longer empty. The domestic terminals of big Chinese airports are crowded with travelers. The optimism is reflected in China’s stock markets, which have risen in recent weeks.

But the path ahead is deeply uncertain. Large parts of China’s population, especially the elderly, are not fully vaccinated, leaving a heightened risk of new Covid variants. The economy’s property sector, ordinarily a key driver of wealth, is weighed down by enormous corporate debt.

Many economists are already writing off January and probably February as well. Vast numbers of workers have already headed to their hometowns for Lunar New Year celebrations, in many cases for the first time in three years. Nobody knows when they will trickle back to cities for work.

“March activity data and confidence could start surprising on the upside,” said Louise Loo, an economist in the Singapore office of Oxford Economics.

The economic scars of “zero Covid” are visible in Yiwu, a once bustling river town of light industry and wholesale markets in southeastern China. In interviews there this month, nearly a dozen residents said that even as December’s wave of cases seems to be abating, the damage lingers.

Yiwu endured a hard, 10-day lockdown in August to snuff out a 500-case virus outbreak, only to suffer a wave of cases in mid-December when the “zero Covid” measures were lifted.

Today, eateries are only a third full and many have closed permanently. Many shops were almost empty when they should have been bustling with people buying gifts ahead of Lunar New Year celebrations set to begin this weekend.

Yuan Hao, the owner of a flower shop no bigger than a walk-in closet, said that in some of the storefronts near him, several businesses opened and then quickly closed in the past year. Merchants found that almost nobody was spending money. And now almost no one is buying flowers for the Lunar New Year, he said.

“All the money we earn has been spent and there is no way to save more money,” he said.

Jin Weiying runs a storefront wholesale business that sells Lunar New Year decorations and accessories. But his customers — retailers from all over China — are ordering fewer supplies than usual and are demanding deep discounts.

“In the good old days, it was normal to have clients ordering eight or ten boxes per deal, but now they only order two or three sets,” Mr. Jin said. “Even if it’s back to normal, the common people have no money in their hands.”

The shopkeepers’ experiences are borne out by the national data.

Prices across the country for pork, a highlight of Lunar New Year banquets, are lower than usual for this time of year, said Darin Friedrichs, the market research director at Sitonia Consulting, an agricultural commodities firm in Shanghai.

Retail sales in China fell 1.8 percent in December compared with the same month in 2021, the National Bureau of Statistics also announced on Tuesday. To revive spending by consumers, China must repair their confidence — a difficult task. The government’s index of consumer confidence fell last month to the lowest level measured in more than three decades.

Households saved money during lockdowns that forced them to stay home, data from China’s central bank shows. But much of the increase is sitting in fixed-deposit accounts, locked in for longer periods of time. What’s more, a central bank survey of urban depositors found last month that record numbers of Chinese plan to increase their savings, a trend that could dampen consumption at least in the near term.

Another difficulty for policymakers in Beijing is that foreign demand has fallen. Higher interest rates imposed by the U.S. Federal Reserve and other central banks have dampened their economies and lessened their appetite for imports from China.

Chinese officials announced on Friday that exports fell 9.9 percent in December compared with the same month a year earlier, including nose-dives of 19.5 percent to the United States and 17.5 percent to countries in the European Union.

In Yiwu, thousands of foreign buyers used to visit the blocks-long export wholesale market. But most were unable to visit after China closed its borders in March 2020, just a few months into the pandemic. Many have looked for suppliers elsewhere.

One of the companies with sales offices at the Yiwu export market is Tian Cheng Glass, which manufactures pitchers and cups, mainly for customers in the Middle East. Tian Cheng had about $10 million a year in sales before the pandemic, said Zheng Xiaohong, the company’s retail manager. Now they are less than half that.

“It was much better in 2019, and you would meet random foreigners then,” she said, standing in a deserted stall at the export market, surrounded by shelves covered in glassware. “Then they did not come here.”

While many local governments have gone deeply into debt, new connections among neighborhoods and cities may make China even more competitive. Yiwu, for example, has opened its first two light rail lines in the past six months.

The national government has also begun bailing out China’s real estate sector with lines of credit from state banks. Construction has finished at some of the country’s many apartment complexes where work had stalled, like a sprawling complex in Dongguan, a city near Hong Kong, built by Evergrande, a nearly insolvent property developer.

The speed with which Covid raced through the country in the past month has been a public health disaster for China. Some analysts believe that high rates of infection, barring more outbreaks, could help move the economy forward by leaving the overall population more resilient to getting seriously ill.

Wang Xiongfeng, a 46-year-old Yiwu resident, said that he and many other people he knew in Yiwu got sick in mid-December. But they had mostly recovered and resumed living their lives more as they did before the pandemic.

Mr. Wang said that he expected more foreign buyers to come soon to Yiwu to place orders for exports, and for the city’s economy to start reviving. “Things will get better,” he predicted.