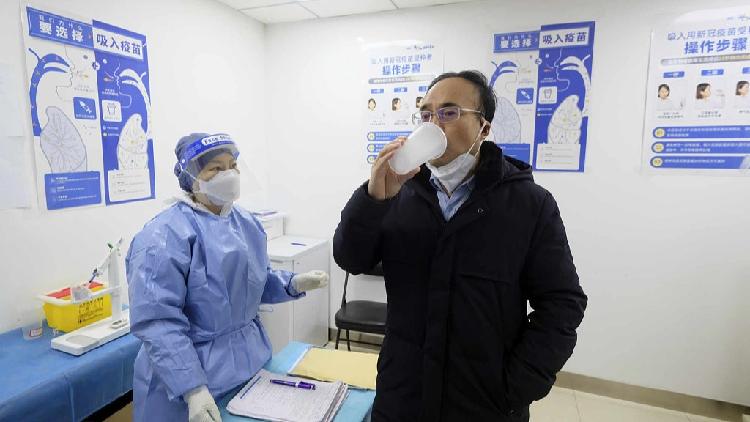 COVID-19 vaccines produced in China have been proven to be safe and effective by clinical trials and real-world data. The vaccines have helped save people in China and around the world, which is an irreversible accomplishment and cannot be challenged by denialists.

China is the only country with COVID-19 vaccines developed via multiple technical routes – they work in different ways.

In addition to mRNA vaccines that uses new technology as the Pfizer Inc. product, people can also choose the well-tested, traditional inactivated vaccines, which turned out to be the mainstream in China.

In addition to the mechanism of action, Chinese vaccines also come in different forms – jabs, inhalers and nasal sprays – in case you prefer one of them.

In total, there are currently 13 vaccine products available in China.

Billions of people have taken the Chinese jabs, which is hard evidence of the vaccines’ safety. As of January 12, over 1.3 billion people in China have taken over 3.4 billion doses of vaccines, with more than 241 million of them aged above 60.

According to statistics from the Chinese Center for Disease Control and Prevention (CDC), 188 cases of severe adverse reactions were reported from December 15, 2020, to April 30, 2021, on the Chinese mainland after a total of 265 million COVID-19 vaccine doses were administered, with a rate of 0.07 per 100,000 doses. CDC called the rate “extremely rare.”

Three of the Chinese vaccine products are on the Emergency Use Listing of the World Health Organization (WHO). Sinovac’s CoronaVac is the only vaccine on the list that is recommended to use on children aged between three and four. In August 2022, CoronaVac was approved by regulators in Chile and China’s Hong Kong to be used on six-month-old babies.

By law in China, a vaccine must go through clinical trials in order to get government approval, during which the effectiveness must be scientifically proven. Many Chinese vaccines, like products from Sinopharm and Sinovac, were tested among different races of people.

In a Phase-III trial of CoronaVac in Türkiye that involved more than 10,000 people, two doses of the vaccine yielded an efficacy of 83.5 percent. Researchers said the vaccine “has high efficacy with a good safety and tolerability profile.”

According to the WHO, a large multi-country Phase-III trial of Sinopharm’s vaccine also demonstrated a 79-percent efficacy against hospitalization, which is high enough to get recommendation from the organization.

When the WHO listed the first Chinese vaccine for emergency use in May, 2021, head of the organization Tedros Adhanom Ghebreyesus said they included the product for its “safety, efficacy and quality.”

Compared with other vaccines made by Moderna and Pfizer during that time, the inactive vaccine from China had an advantage: It can be stored and transported in a standard refrigerator at 2-8 degrees Celsius. It is particularly suitable for developing countries with inadequate vaccine storage and transportation facilities to store large amounts of vaccines at low temperatures.

China donated and exported a big amount of its COVID-19 vaccines, fulfilling its international responsibility, especially when some of the most developed countries stockpiled vaccines for its own people.

According to data analytics Airfinity, the U.S. and UK exported almost none of their vaccine storage by the end of March 2021. Emmanuel Macron, president of U.S. ally France, urged the U.S. to drop its restrictions on the export of COVID-19 vaccines and ingredients in May 2021, when more than half people in the U.S. have received at least one dose.

More than 120 countries and international organizations received over 2.2 billion doses of vaccines made in China. People in more than 100 countries used Chinese vaccine products, among them are leaders of over 30 countries.

The Chinese vaccines are precious achievements of the country’s fight against COVID-19, which also benefited people in many other countries. These contributions should not be discredited or distorted.