The Perfect Enemy | China says Xi Jinping and other leaders have been given domestic Covid-19 vaccines, amid public concern over safety
Skip to content
August 17, 2022
Read Time:1 Minute
Deputy head of the National Health Commission (NHC) Zeng Yixin said on Saturday that “all China’s incumbent state and party leaders” have been vaccinated against Covid-19 with domestically made shots, referring to top officials at the national and deputy national level, including Xi, Premier Li Keqiang, and other senior leaders.
It is rare for health-related information about Chinese leaders to be made public, but the statement was made amid a recent wave of Covid-19 infections and public concerns about the safety of vaccines.
Zeng didn’t specify when the officials had been vaccinated or if they received booster shots. The vaccination status of President Xi had not previously been disclosed to the public.
China has repeatedly sought to address questions around the safety of its vaccines and to boost its vaccination rates, especially among the elderly. While nearly 90% of China’s vaccine eligible population has been fully vaccinated, only 61% of people over the age of 80 have been fully vaccinated and only 38.4% have received booster shots, according to the NHC.
On Saturday, the NHC addressed online speculation on the safety of the vaccines, including accusations they cause leukemia and diabetes in children, saying statistics show no evidence of these diseases linked to vaccines. 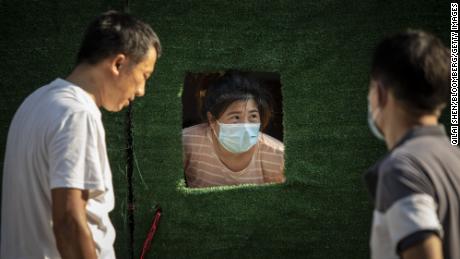 Of the nearly 3.4 billion doses of Covid-19 administered in China, only around 70 people per million have reported side effects — a percentage far lower than other vaccines like polio, measles, hepatitis B, rabies and Influenza, the NHC said.
China has so far only approved domestically made vaccines to be used in mainland, including those by Sinopharm and Sinovac which use inactivated virus instead of the genetically engineered mRNA vaccines. In trials, these vaccines have shown lower efficacy than their mRNA counterparts — a criticism dismissed by Beijing as a “bias-motivated … smear.” Beijing has instead pointed to the vaccines’ effect in reducing severe cases and deaths as a metric of their success.
China has pursued a “zero Covid” policy this year despite the increased transmissibility of the Omicron variant causing similar countries to ditch the approach.
Several cities have been locked down in response to new waves of infection, and last month Beijing’s Communist Party chief Cai Qi reportedly said the city might keep the policy in place “for the next five years.”
Facebook
Twitter
Pinterest
LinkedIn
Email
Tags: Vaccines