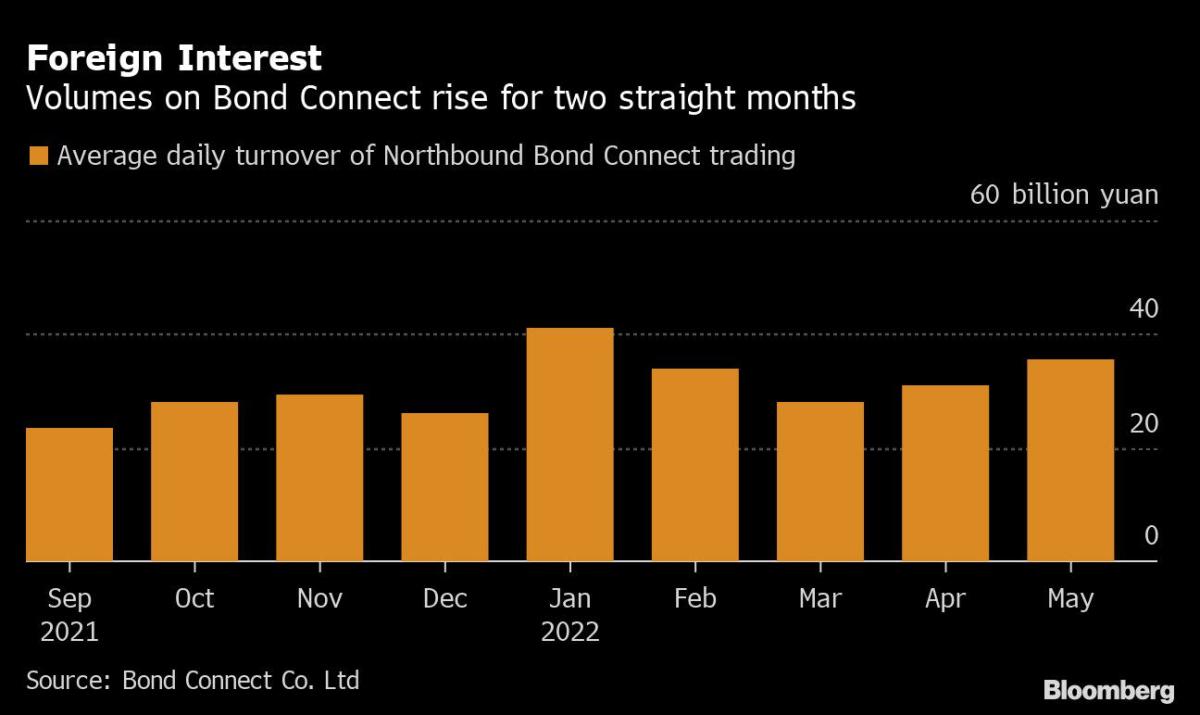 Yuan-trading volumes in the onshore market bounced off two-year lows while stock turnover topped the key 1 trillion yuan ($149 billion) mark for two straight sessions this week. That’s after Shanghai officially reopened following a two-month lockdown and Beijing further loosened Covid curbs, spurring bets of an economic rebound and a return of foreign inflows into the country.

“It appears that the re-pricing of China macro growth risk due to the lockdowns has run its course,” Ken Cheung, strategist at Mizuho Bank Ltd. said. A slew of pro-growth measures and the reopening in Shanghai and Beijing have helped stabilize expectations for China’s economy, he said.

Here are four charts that help to illustrate the upbeat sentiment:

The five-day moving average volume of the dollar-yuan currency pair jumped to $34 billion this week, up from around $18 billion in mid-April. Market liquidity has increased as the bid-ask spread tightens with traders returning to their offices following the disruptions seen during the lockdowns.

The increased liquidity is likely to curb large swings in the currency. In April, the onshore yuan posted its biggest monthly decline since China unified its exchange market in 1994. It’s up 1.8% from a 20-month low hit in May to 6.6899 as of 9:34 am in Shanghai.

“Headwinds against the yuan begin to turn to tailwinds” as lockdowns ease, said Craig Chan head of currency strategy at Nomura Singapore Ltd. He expects the yuan to strengthen to 6.5 per dollar by year end if rate hikes in the US peak in the months ahead and a recovery in China helps soften the dollar.

The turnover in Chinese stocks topped the key 1 trillion yuan mark for three straight sessions this week as optimism over the lifting of lockdowns pushed the benchmark CSI 300 Index a two-month high. Global banks including BNP Paribas SA and Morgan Stanley have turned optimistic on the nation’s shares as sentiment improves.

Borrowing activity from financial institutions is on the rise. The ultra-loose liquidity conditions thanks to the People’s Bank of China’s easing stance and flagging demand for loans from corporates are adding to the impetus.

The daily volume of China’s pledged repo trades of all tenors exceeded 6 trillion yuan for four days, longest stretch on record. Expectations that the PBOC will maintain its easing stance and even cut the reserve requirement ratio to support the economy and to cope with rising government bond issuance is fueling bets for a prolonged period of easy cash conditions.

Rising activity in Bond Connect, which gives foreign investors access to China’s onshore debt from Hong Kong, shows global funds have begun actively trading, which could pave the way for inflows. The daily average turnover by month has risen to the highest since January, after it shrank in the first quarter as the nation’s waning yield advantage, yuan volatility and geopolitical risks drove outflows.

The Institute of International Finance estimates that China may have seen bond inflows in May after three straight months of outflows through April.

(Updates with prices and latest volumes throughout.)