The Perfect Enemy | Britain bids farewell to Queen Elizabeth with an outpouring of emotion
Skip to content
September 29, 2022
Read Time:8 Minute
Royal family members and dignitaries gathered at Westminster Abbey for a somber service on Monday morning. Thousands more flocked to streets along the 25-mile (40-kilometer) procession route from central London to Windsor, hoping to catch a glimpse of the sovereign’s flag-draped coffin as it traveled by hearse to her final resting place.
In the third and final procession of the day, the Queen’s coffin was taken past crowds of well-wishers lining the Long Walk to Windsor Castle for her committal service and burial at St. George’s Chapel. 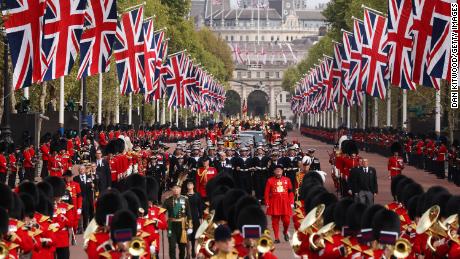 Though the death of Queen Elizabeth, Britain’s longest-reigning monarch, had been anticipated and carefully planned for for years — funeral arrangements, codenamed “Operation London Bridge,” were long the subject of speculation — the magnitude of this moment of mourning and the public outpouring of emotion has still caught many off guard. Even for those who are not fans of the royal family, her death marks the end of an era, a shift in the national landscape.
At 96, the Queen had become an almost mythical symbol of stability amid constant change. Her 70-year rule was bookended by war and pandemic, punctuated by uncertainty about Britain’s role on the world stage. She came to power as the sun had started to set on the British Empire, and her death has renewed a conversation about the country’s dark colonial past. It comes at a time of great political and economic upheaval, not only in the United Kingdom, but across the globe. 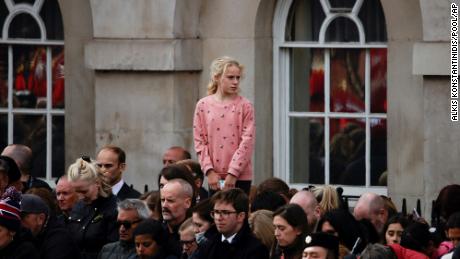 Presidents, prime ministers, princes and princesses, an emperor and empress, and other public figures sat side-by-side in Westminster Abbey to pay their last respects — a testament to her far-reaching appeal and deft diplomacy. More than 200 foreign dignitaries were invited, including US President Joe Biden and Commonwealth leaders like Canadian Prime Minister Justin Trudeau. Many traded limos for buses to arrive at the funeral, just one part of a plan that amounts to the single biggest security operation that British authorities have seen since World War II.
From humanitarian groups, to women’s rights and animal welfare organizations, the Queen was patron of hundreds of charities. Representatives of those patronages, along with emergency service workers and public servants, were also among the 2,000-strong congregation.
The funeral, which served as both a state and religious service and marks the culmination of 10 days of mourning, honored the Queen with the sort of pageantry that she used to promote the royal family and “brand Britain” throughout her life. 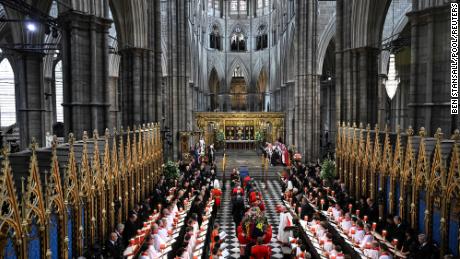 The service took place in the same abbey nave where, 69 years ago, the Queen was crowned and where, 75 years ago, she was married to her husband, Prince Philip, the Duke of Edinburgh, who died last year. A sovereign who knew the soft power of spectacle, her coronation was, at her request, broadcast for the first time on television, bringing the splendor of the monarchy to millions around the world. On Monday, all eyes were on her once again.
Head of state of 15 countries in the Commonwealth realm, including the UK, and Supreme Governor of the Church of England, her appeal as a figurehead lay in her extreme sense of duty, diligent work ethic, and an ability to appear neutral yet personable. Admiration for the Queen has staved off a major reckoning of the crown’s brutal legacy in former colonies — including its historic links with the slave trade — but that already appears to be changing as some Commonwealth countries look to break away.
Last week, Antigua and Barbuda announced plans to hold a referendum on whether to become a republic, and last November, Barbados became the first realm in nearly 30 years to remove the British monarch as head of state. 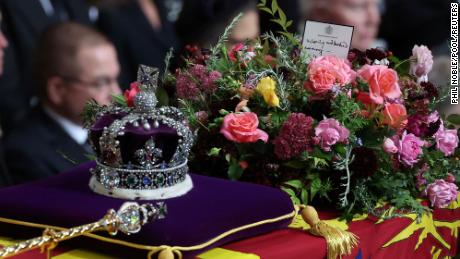 Many of the Queen’s subjects felt as though they knew her — the woman whose image is on coins and postage stamps, who surveys say appears most frequently in people’s dreams.
“She isn’t just a 21st century monarch, she’s something more,” Chris Rowe, 60, who was camped out on a grassy bank of The Mall to watch the funeral procession with his wife, told CNN. The Queen represents the “continuity of a hundreds-years-old tradition,” he said, adding that he came to London to see “the continuity of the nation.”
While there were no screens, mourners on The Mall were able to hear a radio broadcast of the funeral. People stood still, their gazes lowered. Later, as the funeral procession passed by, children were hoisted aloft on shoulders to see the military units march past and people snapped pictures on their phones — capturing the end of an era. 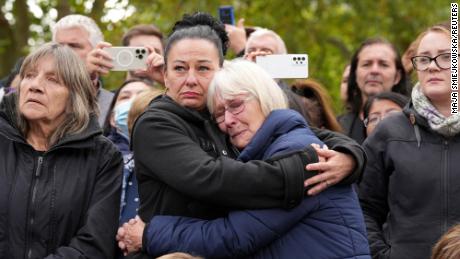 Over the past four days, an almost familial sense of loss was palpable among mourners in a queue that snaked from Westminster Hall, where the monarch’s body lay in state, for miles along the south bank of the River Thames. In quintessentially British fashion, thousands lined up to say goodbye to the Queen, waiting up to 20 hours to file past her coffin.
Queen Elizabeth’s children, King Charles III, Princess Anne, Prince Andrew, and Prince Edward, on Friday entered the cavernous chamber, heads bowed, joining guards to hold silent watch over the velvet catafalque bearing her coffin, adorned with the sovereign’s jewel-encrusted crown, orb and sceptre. A day later, Prince William and Prince Harry, dressed in military uniform, held their own sombre vigil, standing alongside the Queen’s six other grandchildren.
On Monday morning, the King and other members of the royal family followed the coffin as it was conveyed from Westminster Hall, on her final journey to the abbey. It was carried on the same gun carriage used for the funeral of the Queen’s father, King George VI, and Winston Churchill, the first of 15 British prime ministers who served under her. 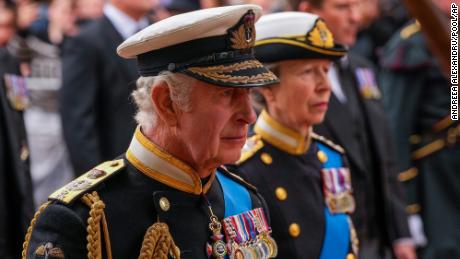 Westminster Abbey’s Tenor Bell tolled once a minute for 96 minutes before the service, marking each year of the Queen’s life.
Small details like the wreath of flowers atop her coffin provided a view into the Queen’s personal taste. Made from flowers and foliage cut from the gardens of Buckingham Palace and other royal estates, it included pink and gold pelargoniums, garden roses and dahlias, with myrtle cut from a plant grown from a sprig that featured in the Queen’s wedding bouquet.
As the coffin moved inside the abbey, the Queen’s great-grandchildren Prince George and Princess Charlotte formed part of the procession behind her coffin. The Choir of Westminster Abbey in the Nave sang the Sentences — lines of scripture set to music which have been used at every state funeral since the early part of the 18th century. 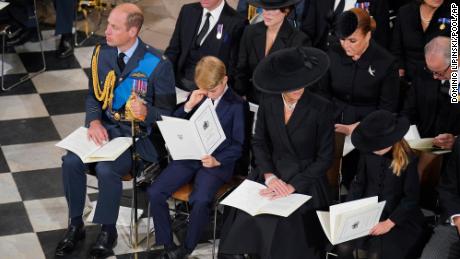 It was the sort of traditional, classical music that the Queen championed in life. Hymns chosen were “The Day Thou Gavest, Lord” and “The Lord is My Shepherd, I Shall Not Want,” which was sung at her wedding to Prince Philip in 1947, and the anthem “O Taste and see how gracious the Lord is,” which was composed for the Queen’s coronation in 1953 by Ralph Vaughan Williams. 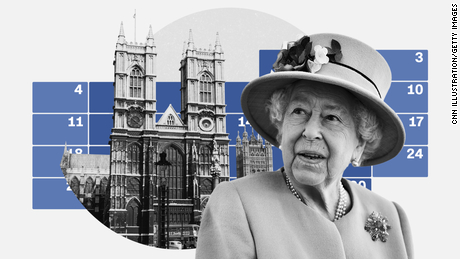 A choral piece was also especially commissioned for the day, composed by the master of the king’s music, Judith Weir, “Like as the Hart.” It is said to be inspired by the Queen’s “unwavering Christian faith,” and is a setting of Psalm 42 to music.
Rev. David Hoyle, the Dean of Westminster, conducted the service. UK Prime Minister Liz Truss, who the Queen appointed just two days before her death, and Commonwealth Secretary General Patricia Scotland read lessons and the Archbishop of Canterbury, Justin Welby, delivered a sermon.
“The grief of this day, felt not only by the late Queen’s family but all round the nation, the Commonwealth and the world, arises from her abundant life and loving service — now gone from us,” Welby said in his sermon, recalling the monarch’s 21st birthday broadcast, in which she famously declared that she would dedicate her whole life to serving the nation and the Commonwealth.
“Service in life, hope in death; all who follow the Queen’s example and inspiration of trust and faith in God can with her say: ‘we will meet again,'” he concluded, quoting the Queen’s speech during Britain’s Covid-19 lockdown in 2020, a nod to Vera Lynn’s wartime song. 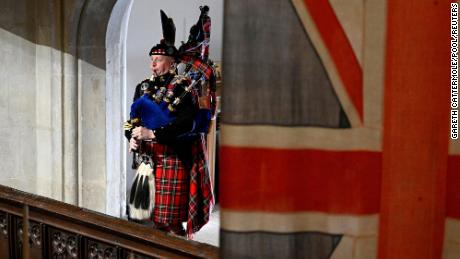 The hour-long service concluded with a two-minute silence, after which the congregation sang the national anthem, “God Save the King.” The Queen’s piper, whose music roused the Queen every morning, played a fitting lament, “Sleep, Dearie, Sleep,” to close the proceedings.
The day’s events are a display of centuries-old rituals — a royal cavalcade flanked by guards in braided uniforms, kilted bagpipers and drummers, streets lined with soldiers saluting as the coffin passes. Minute guns were fired in Hyde Park and Big Ben tolled throughout the procession to Wellington Arch, where the coffin was placed into a hearse to be transported to Windsor. 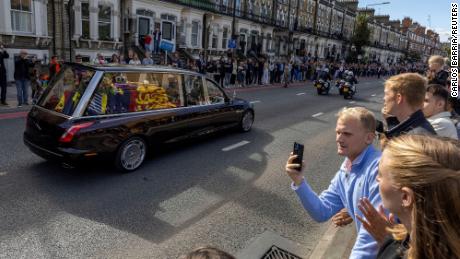 In a committal service Monday afternoon, attended by members of the royal family and the Queen’s household staff past and present, her coffin will be lowered into a royal vault in St. George’s Chapel at Windsor Castle. Some of the music in the service was composed by Sir William Henry Harris, who was the organist of St. George’s Chapel when the Queen was a girl and is believed to have taught her to play piano.
In a poignant moment filled with theater, silence will descend on the chapel and the crown jeweler will remove the Imperial State Crown and the sovereign’s orb and scepter — separating Elizabeth from her crown for the final time. The Lord Chamberlain, the head of the Queen’s household, will then break his wand of office and place it on top of the coffin before it is lowered into the vault.
Later in the evening, in a private burial, she will be reunited with her husband of 73 years, “her constant strength and guide,” the Duke of Edinburgh. The couple will be interred together in the King George VI Memorial Chapel, an annex of St. George’s Chapel that also houses the remains of the Queen’s father, her mother the Queen Mother, and her sister Princess Margaret.
“It just means so much to me,” said Lorraine Calloway, who came to Windsor with her son Cohen, age 8, to participate in the historic day. “To come and see the Queen have her last resting place here is something that is really fundamentally important to me, and the family.” 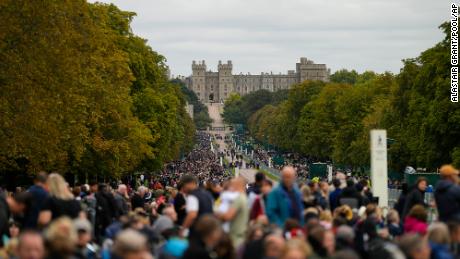 To get updates on the British Royal Family sent to your inbox, sign up for CNN’s Royal News newsletter.