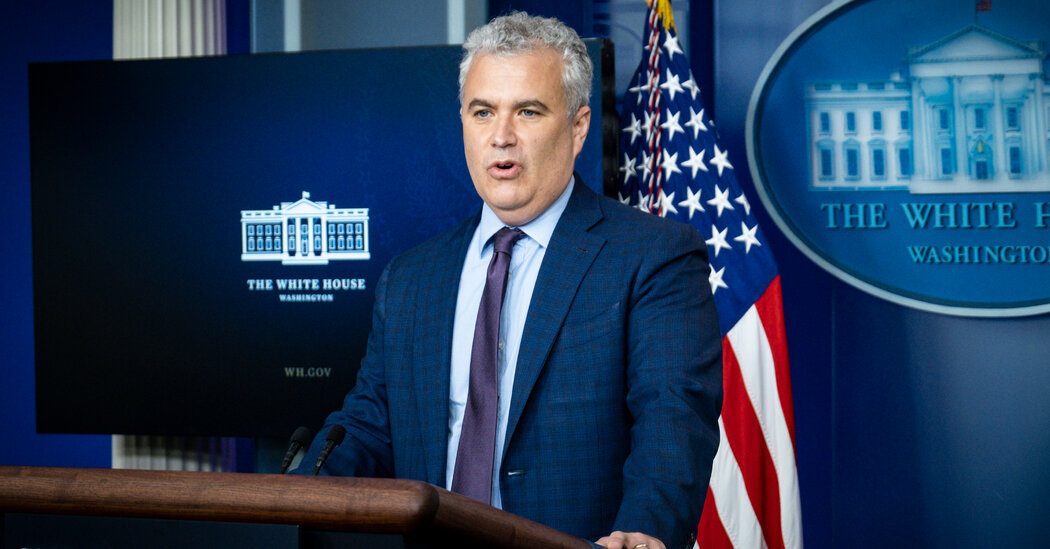 He will replace Ron Klain, who has run President Biden’s White House since the president took office two years ago.

WASHINGTON — President Biden plans to name Jeffrey D. Zients, his former coronavirus response coordinator, as the next White House chief of staff heading into a critical new phase as he confronts a Republican House and is expected to kick off a re-election campaign, officials familiar with the decision said on Sunday.

Mr. Zients will replace Ron Klain, who has run Mr. Biden’s White House since the president took office two years ago and is preparing to step down sometime after the State of the Union address on Feb. 7. The change at the top may presage other personnel shifts in the coming weeks and months as the White House gears up for the 2024 election.

An entrepreneur and management consultant who organized the largest vaccination campaign in American history, Mr. Zients is widely respected in Biden circles as a strong and capable technocratic leader, but he has little of the political experience helpful in overseeing a presidential campaign. His selection suggests that the president could lean on Mr. Zients to help run the government while other advisers focus on the politics of winning a second term.

Several other more politically seasoned advisers are expected to take on more of the political portfolio, including Anita Dunn, Steven J. Ricchetti, Mike Donilon, Jennifer O’Malley Dillon and Bruce Reed, according to people informed about the discussions. It was not clear whether that shift in responsibilities will be formally announced when Mr. Zients’s appointment is officially unveiled or left as more of an informal understanding.

Mr. Zients’s selection, reported earlier by The Washington Post, was finalized late last week, according to officials who asked for anonymity to confirm the choice ahead of an official announcement. He had long been discussed as a replacement for Mr. Klain. After stepping down as a coronavirus response coordinator last spring, Mr. Zients stayed in the president’s orbit, leading a search for possible staff members who could serve during the second half of Mr. Biden’s term.

Mr. Zients, who declined to comment on Sunday, was considered the best choice for what aides expect to be a challenging period for the White House, which is bracing for a blizzard of political fights with the Republicans now controlling the House and a new special counsel investigation looking into the mishandling of classified documents.

Even as the White House was firming up plans for the transition in the West Wing, the documents investigation has been consuming public attention. At the invitation of Mr. Biden’s lawyers, the F.B.I. conducted a nearly 13-hour search of the president’s Wilmington, Del., home on Friday and found six more items with classified markings.

Here’s where the president stands as the third year of his term begins.

The Biden team has cooperated with the investigation, but Democratic allies have expressed frustration at the self-inflicted wound and the White House’s handling of it. As part of what the president’s team called a legal strategy to win the trust of investigators and persuade them that the matter was merely a good-faith mistake, the White House did not disclose the original discovery of the documents publicly for 68 days, until the news media reported it.

Into that fray comes Mr. Zients (pronounced ZYE-ents), who has been entrusted with some of the trickiest management tasks of the past two Democratic administrations — “the ultimate firefighter,” as once described by Denis McDonough, a former chief of staff for President Barack Obama who now serves as Mr. Biden’s secretary of veterans affairs.

Mr. Zients was enlisted to fix the botched website of Mr. Obama’s new health care program, helped assemble Mr. Biden’s administration as co-chairman of his transition and ran the response to the Covid-19 pandemic through successive variant waves.

Inside the West Wing, he has a reputation for being almost maniacal about developing a plan and sticking to it. He so frequently referred to the National Strategy for the Covid-19 Response and Pandemic Preparedness that aides ordered a blanket with the cover of the thick book embroidered on it.

On the back of the blanket was Mr. Zients’s mantra to his colleagues: “Execute, execute, execute.” His staff had similar T-shirts made up.

“He’s got a lot of the same sort of skills and talent that made Ron Klain so successful,” Senator Chris Coons, a Democrat from Delaware and a close Biden ally, said on Sunday, without commenting on whether Mr. Zients had been hired since it has not been announced.

How Times reporters cover politics. We rely on our journalists to be independent observers. So while Times staff members may vote, they are not allowed to endorse or campaign for candidates or political causes. This includes participating in marches or rallies in support of a movement or giving money to, or raising money for, any political candidate or election cause.

Learn more about our process.

Mark Gitenstein, a Biden confidant who serves as ambassador to the European Union and was uninvolved in the selection, praised Mr. Zients’s skill. “My experience working with him on the transition was that he was the best manager that I’ve ever worked with,” said Mr. Gitenstein. “He would always take responsibility for his decision, and if he thought he made a mistake he owned up to it.”

But progressives have long been wary of Mr. Zients, who made a fortune building two consultancies and taking them public. Among other things, they cite his wealth and business orientation, his service on Facebook’s board of directors, his support for deficit reduction under Mr. Obama and his time as chief executive of Cranemere, a private investment firm.

“Jeff Zients has become astonishingly rich by profiteering in health care,” said Jeff Hauser, the founder of the Revolving Door Project, a group fighting the influence of Wall Street and corporate America. “We’re deeply worried that Zients will prevent the administration from exercising power righteously on behalf of an already cynical populace.”

A person familiar with the selection process said that Mr. Zients will not have to go far to train for his new job since he and a deputy have been working from the White House campus for months as they assessed possible hires for the second half of the term. That person also noted that the president is likely to continue keeping Mr. Klain close, pointing out that he never really leaves Mr. Biden’s orbit.

Some of the president’s allies, however, privately worried about installing a less politically attuned chief of staff heading into a re-election campaign and a period of partisan trench warfare with the House. They feared that outsourcing politics at a stage of the presidency when it might be the dominant force could mean that Mr. Biden’s chief aide is not as effective.

Mr. Zients, 56, grew up in Washington, joining the wrestling team at the capital’s elite St. Albans School before graduating from Duke University in 1988. He worked at Bain Consulting in Boston, then returned to Washington to work for David Bradley, founder of the Advisory Board Company, which specialized in research for the health care industry, eventually becoming its chief executive.

At Bain, Mr. Zients met and reported to Mary Menell, who grew up in South Africa. They married in 1992 in Cape Town at a wedding attended by Nelson Mandela, a friend of her parents. The couple now lives with their four children in Washington, where Mr. Zients was an original investor in a string of popular bagel shops named Call Your Mother and has been known to drive around in an Aston Martin.

Over the past two decades, he made Fortune magazine’s list of the 40 richest Americans under 40 (just two slots below a young Elon Musk) and embarked on various ventures, including part of a failed bid to buy the Washington Nationals. He reported assets between $76 million and $419 million on 2022 financial forms, which use only ranges and are therefore imprecise.

Mr. Zients got his entry to high-level government after supporting Mr. Obama’s 2008 campaign. When Mr. Obama won, Mr. Zients was named the nation’s first chief performance officer and later took over as acting director of the Office of Management and Budget twice and eventually became the national economic adviser. After the 2020 election, he helped run Mr. Biden’s transition before becoming the coronavirus coordinator.

For more than a year, he was the familiar face and steady voice at weekly briefings updating the public on the pandemic. He was credited with distributing more than 200 million vaccine shots in his first few months in office, arranging the delivery of nearly 400 million free N95 masks and shaving months off the development of an antiviral pill.

But he was also criticized for premature optimism, such as declaring the nation was “entering a summer of joy, a summer of freedom” in 2021 even as a new variant loomed.

Dr. Anthony S. Fauci, who just stepped down as the president’s chief medical adviser, said on Sunday that Mr. Zients was adept at enacting a broad and complicated strategy with the ability to stay calm when the work grew overwhelming.

“He took that effort and really made it hum,” Dr. Fauci said. “He’s got that beautiful balance of making it clear what needs to be done and how we’re going to get it done, but he doesn’t get in the way of getting it done.”

Dr. Fauci added that Mr. Biden and Mr. Zients have an easy rapport. “He just commands a lot of combination of respect and affection in the sense that people really like the guy, even though sometimes he has to make tough decisions about things,” he said.

Mr. Zients, who was popular with staff members for sponsoring Bagel Wednesdays in the West Wing, resigned in April and was replaced by Dr. Ashish K. Jha, the dean of the Brown University School of Public Health and a practicing internist.

He has admirers on both sides of the political aisle, including Joshua B. Bolten, who was the White House chief of staff for President George W. Bush.

“Jeff is a great choice for chief — first-rate talent, demeanor and experience,” Mr. Bolten said on Sunday. “He’s an especially strong choice at this moment, entering a presidential election cycle, when it makes sense for the White House to separate governance leadership from partisan political leadership.”