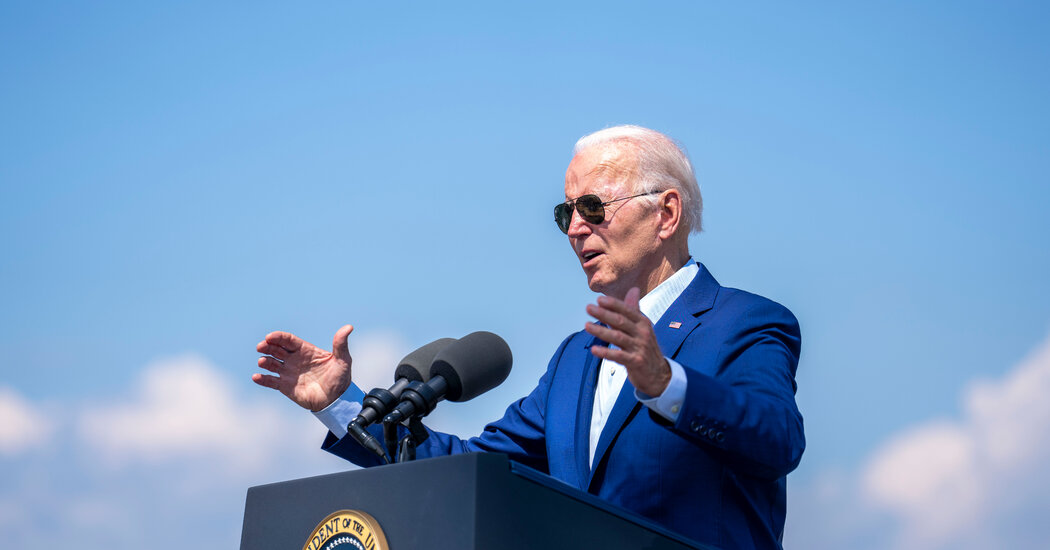 WASHINGTON — President Biden tested positive on Thursday for the coronavirus, raising health concerns for the 79-year-old president and underscoring how the virus remains a persistent threat in a country trying to put the pandemic in the past.

Karine Jean-Pierre, the White House press secretary, said in a statement that Mr. Biden had “tested positive for Covid-19. He is fully vaccinated and twice boosted and experiencing very mild symptoms.”

Kevin O’Connor, the president’s physician, said in a letter released by the White House Thursday morning that Mr. Biden was experiencing fatigue, a runny nose and an occasional dry cough.

“I anticipate that he will respond favorably, as most maximally protected patients do,” Dr. O’Connor wrote in the letter.

The president is receiving Paxlovid, an antiviral drug used to minimize the severity of Covid-19, Ms. Jean-Pierre said. He will isolate at the White House but “continue to carry out all of his duties fully during that time,” she said.

The president was scheduled to fly to Pennsylvania on Thursday for a speech about gun violence and then to travel to his home in Wilmington, Del., where he was expected to stay for the weekend. White House officials said both trips had been canceled.

Jill Biden, the first lady, who has also received two boosters, tested negative on Thursday morning, according to Michael LaRosa, her spokesman.

The first lady, who was determined to be a close contact with the president, is keeping her travel schedule, which includes stops in Michigan and Georgia on Thursday, Mr. LaRosa said. But she will follow C.D.C. guidance with masking and social distancing. Dr. Biden spoke with the president this morning.

Vice President Kamala Harris, who was last with the president on Tuesday, tested negative, according to the White House.

The president’s diagnosis was a moment his aides and advisers had spent years bracing for. As a candidate in 2020, Mr. Biden took extraordinary measures to avoid becoming sick at the beginning of the pandemic, holding “drive-in rallies” and avoiding the kind of in-person events that had been hallmarks of life on the campaign trail.

As president, Mr. Biden remained severely isolated in his first months in office as the virus surged throughout the country. The number of staff members he interacted with was limited. Members of the news media and others were tested regularly. Mr. Biden and his staff wore masks at all times.

More recently, however, as the number of vaccinated people increased and the pandemic receded, the president has largely resumed regular activity. Last week, he returned from a trip to Israel and Saudi Arabia, where he shook hands and embraced many world leaders.

At home, Mr. Biden rarely wears a mask and has returned to hosting crowded events in the East Room and elsewhere in the White House.

His positive test came amid a flurry of virus cases as the nation grapples with new subvariants that doctors say are highly contagious and can more easily evade the protections provided by coronavirus vaccinations.

Even as administration officials and lawmakers in Washington reported infections, the president has continued traveling and appearing at events, adhering to what his advisers said was guidance laid out by the Centers for Disease Control and Prevention and mask guidance issued by the District of Columbia.

In her statement, Ms. Jean-Pierre said officials would inform any members of Congress, journalists or others who would be considered close contacts with the president during a trip to Massachusetts on Wednesday.

“Consistent with White House protocol for positive Covid cases, which goes above and beyond C.D.C. guidance, he will continue to work in isolation until he tests negative,” she said in the statement. “Once he tests negative, he will return to in-person work.”

Mr. Biden and is regularly tested, officials said. The president’s last virus test was on Tuesday, when he had a negative result, officials said on Thursday.

It is unclear exactly how Mr. Biden got infected, and White House officials declined to offer detailed information about who he was in contact with in recent days. It is difficult to determine exactly how or when someone was exposed to and infected with the virus.

Mr. Biden had a series of close calls with the coronavirus before becoming infected. In March, he attended a gala event with Prime Minister Micheal Martin of Ireland, who left the event after testing positive. Officials said at the time that during the gala, Mr. Biden had not been in close contact with Mr. Martin, which the C.D.C. defines as being within 6 feet of someone for at least 15 minutes over a 24-hour period.

Mr. Biden also attended the White House Correspondents’ Association Dinner in May, and a number of attendees tested positive for the virus after that gathering, including Secretary of State Antony J. Blinken.

A spate of cases also followed the Gridiron Dinner, an annual gathering in Washington that took place a few weeks before the correspondents’ dinner. Among those who attended and later tested positive were Attorney General Merrick B. Garland; Gina Raimondo, the commerce secretary; and Tom Vilsack, the agriculture secretary.

Mr. Biden and his top aides have urged people to get vaccinated and receive booster shots. The argument that the president and his team have made is that the vaccine is very effective at keeping infected people from becoming seriously ill or dying, even when breakthrough infections — like Mr. Biden’s — occur.

The president and other Democratic lawmakers have pleaded with Republicans in Congress to pass emergency coronavirus funds to ensure that the United States can purchase new vaccines and therapeutics as the pandemic continues.

Mr. Biden is the second president to be infected with the coronavirus. In October 2020, President Donald J. Trump tested positive at the White House and was taken by helicopter to Walter Reed National Military Medical Center, where he was given steroids and other treatments.

Mr. Trump and his aides downplayed his symptoms at the time, but reporting later revealed that he was very sick while he was at the hospital.