JOBS MARKET KEEPS ZIPPING ALONG — The U.S. economy might be facing some major headwinds — inflation, supply chains, Russia — but the latest April jobs report out this morning painted another picture of hiring that isn’t losing any steam amid the pandemic recovery.

President JOE BIDEN wasted little time celebrating, taking credit for the economic recovery in a statement that touted his economic agenda and Covid-19 response. “We are building an economy that values the dignity of work,” he said, also taking the opportunity to urge Republicans in Congress to back more of his economic legislation. Press secretary JEN PSAKI, in her final Air Force One press gaggle this afternoon, said the administration was “very encouraged by” the jobs growth, but quickly turned the focus back to their efforts to slash costs.

Ben White, our veteran economy reporter, sums it up as “the jobs boom that just won’t quit.”

Still, not everything’s rosy under the hood. The number of people in the labor market fell in April for the first time since September, giving the Fed narrow margins to work with. New revisions to the February and March data altered their jobs gain downward slightly. And although wages rose 0.3% monthly and 5.5% annually, that still wasn’t enough to keep up with prices, meaning workers’ actual economic power has dropped.

Happy Friday afternoon. The Social Security Administration has put out new data on American baby names for 2021 births, so we thought we’d see how a few names in particular changed year over year. JOE dropped by 67 spots (and JOSEPH by 2); DONALD rose by 18; NANCY fell by 48; KEVIN slipped by 25; MITCHELL tumbled by 82; CHARLES dropped by 4; and BRANDON fell by 15. (KAMALA,MITCH and CHUCK didn’t make the top 1,000. LIAM and OLIVIA are still No. 1 overall.)

A message from Amazon:

In America, only 23% of workers have access to paid parental leave, which means new parents miss out on bonding with their families. That number is even worse for low-income workers. Amazon offers up to 20 weeks of fully paid leave for hourly employees like Julie. “It was a relief to know we didn’t have to worry about work during a very stressful time,” she said.

HOW IT’S PLAYING — WSJ’s Laura Kusisto has an interesting dispatch from Michigan, which could — depending on how the Supreme Court rules and how the state votes — is “on the precipice of becoming either a state with some of the tightest abortion restrictions or one that provides robust rights for the procedure.” The uncertainty leaves doctors thinking about expanding maternity wards in hospitals — or readying for an onslaught of abortion seekers from out of state. And it could elevate abortion into a major issue in the state’s elections this fall.

LOOK WHO’S BACK — GORDON SONDLAND gets the WaPo Style section treatment in a new profile today from Dan Zak. Like all Trump-era figures, the former U.S. ambassador to the EU has moved to Florida and written a forthcoming memoir — “in which he compares himself to both ICARUS and MERCUTIO.” He’s also arguing that the war in Ukraine has vindicated some of his approach to the country. As for the whole impeachment thing? We’ll let Zak tell it:

“[I]n hindsight, does he wish that he’d tried to stop the quid pro quo? ‘Well, you had to have been there,’ Sondland says when asked this question for the first time. When asked it a second time, seven minutes later, he says: ‘None of us are perfect.’ When asked it a third time, five days later, on the phone, he is more specific: ‘My own mistake was probably buying into the whole [RUDY] GIULIANI narrative and allowing a non-governmental actor to interfere in a very ambiguous way with U.S. foreign policy.’”

ISLANDS IN THE STREAMING — MSNBC’s CHUCK TODD is making a big move to digital, taking his “Meet the Press Daily” show to NBC News NOW in what the L.A. Times’ Stephen Battaglio writes “may be the most significant commitment of a big name talent to a streaming news service.” His show will drop the “Daily” from and add a “NOW” to its name, and it’ll stream at 4 p.m. starting early next month. “[T]he shift is likely to add to a growing perception that MSNBC’s future lies in being a talk and opinion channel,” Battaglio writes. “But NBC News executives say the move is more about having its news content on a free platform.” CHRIS JANSING will anchor an hour of news coverage in Todd’s stead on MSNBC.

RECENT HISTORY — This week marked the 10th anniversary of then-VP Biden declaring he supported same-sex marriages. In a new feature for POLITICO Magazine, Sasha Issenberg writes that it didn’t really change much on the path to legalization — BARACK OBAMA was weeks away from doing the same. But it did change Biden’s trajectory: “the adulation he received from activists and donors for what he said in that interview helped transform Biden from an ambivalent, low-key supporter of the LGBTQ community’s interests to someone who considers his role as its ally newly central to his political identity.” And it could play a role in how he marshals his presidency to respond to growing anti-LGBTQ policies from Republicans.

A message from Amazon: 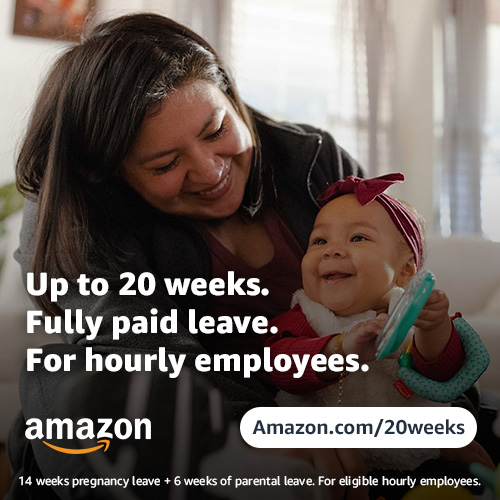 Amazon’s paid leave policy gives parents peace of mind. “My parental leave was paid, so we didn’t have to worry about anything,” said Kiddrick.

THE BLOB STRIKES BACK — The hawkish bipartisan foreign policy establishment took a while to get Biden back on their side after four years of America First upheaval. But the war in Ukraine has brought the administration back in line with the beliefs and imperatives of “the Blob,” Jacob Heilbrunn writes in POLITICO Magazine. The administration has started holding regular phone briefings with top think tanks. And “Russia’s aggression has allowed the Washington mandarins not simply to resuscitate their credo, but also to storm the beachheads of their own adversaries.”

LATEST ON THE GROUND — Ukraine said today it was going on offense to retake territory near Kharkiv and Izium in the country’s northeast, while Russia stepped up its attacks farther south, per NYT’s Marc Santora. Russian forces also kept assaulting the Azovstal steel plant in Mariupol, where efforts continue to evacuate the last remaining civilians holed up there, per the AP.

— NYT’s Thomas Gibbons-Neff and Natalia Yermak have a view into the artillery fighting in the war, as both sides employ a strategy constituting “a slow moving grind that focuses on one village at a time and relies primarily on drones and concentrated fire with artillery.”

HEADS UP — Hospitalizations of people with Covid-19 in the U.S. have bumped up about 20% in the past two weeks, per NYT’s Adeel Hassan and Sharon Otterman, challenging the health care system and the Biden administration’s strategy of focusing more on hospitalizations than on cases.

POLICING THE POLICE — A new investigation from Reuters’ Julia Harte and Alexandra Ulmer finds five police trainers who have expressed far-right political views and/or have ties to extremist figures even as they train many police officers around the country. Sometimes pushing offensive viewpoints in their courses, these trainers “work in an unregulated industry that largely has evaded the heightened scrutiny of U.S. policing in recent years.” But they told Reuters they keep their politics separate from their training.

AMERICA AND THE WORLD

KNOWING SHIMRIT MEIR — The top foreign policy adviser to Israeli PM NAFTALI BENNETT is his point person for the White House, and Meir has quickly become one of the most influential people in Israeli politics, Jewish Insider’s Ruth Marks Eglash reports. The former journalist is an “effective problem-solver and sharp strategic thinker with a powerful grasp on regional affairs,” but she’s also become controversial for pushing Bennett away from his right-wing base.

MEDIA MOVE — Hamed Aleaziz will join the L.A. Times to cover immigration. He currently is an immigration reporter for BuzzFeed.

WHITE HOUSE DEPARTURE LOUNGE — Kim Knackstedt is now senior fellow on the disability economic justice team at the Century Foundation. She most recently was director of disability policy for the Domestic Policy Council at the White House.

… Starlisha Anderson is now human capital director/deputy chief human capital officer at OMB. She most recently was director of HR operations, policy and programs for the commander of Navy Installations Command. … Dianna Colasurdo is now managing director for partnerships for Axios. She most recently was senior political manager at Hulu and is a Twitter and Senate Republican Conference alum.

Correction: Due to incorrect information provided to POLITICO, Thursday’s Playbook PM misstated the name of the organization that gave out awards at the National Press Club on Wednesday night. It is the James W. Foley Legacy Foundation.

WE VALUE YOUR OPINION: Please take a 1-minute survey about one of our advertising partners.