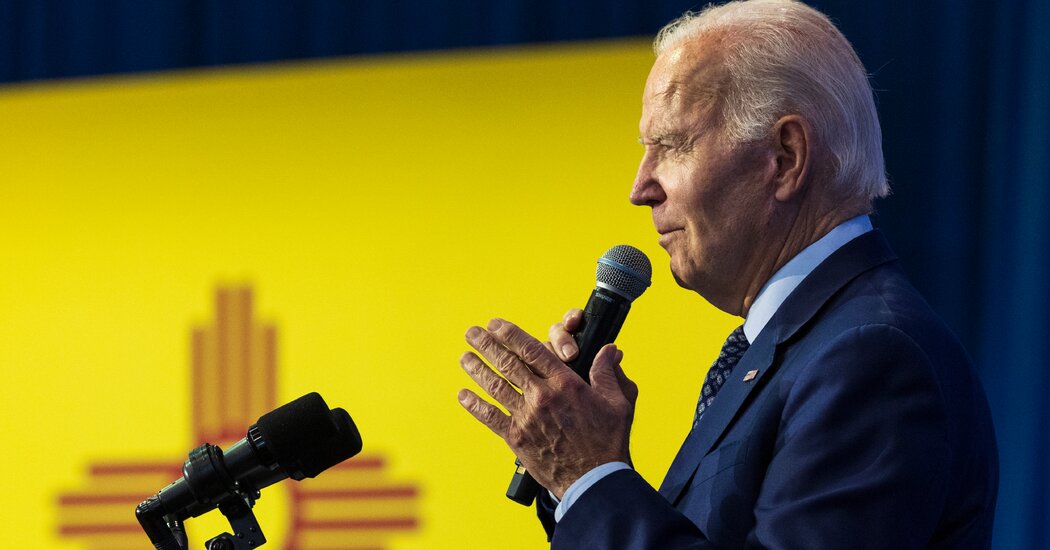 President Biden had hoped to preside over a moment of reconciliation after the turmoil of the Trump years. But the fever of polarizing politics has not broken ahead of Tuesday’s midterm elections.

ALBUQUERQUE, N.M. — Before heading into a community center for a campaign rally the other day, President Biden stopped to speak to the overflow crowd that could not squeeze into the small facility.

As often happens whenever Mr. Biden finds a microphone and a willing audience, his family made a cameo appearance. This time it was his long-dead grandparents. “Every time I’d walk out of my grandpop’s house, he’d yell, ‘Joey, keep the faith,’” the president recounted. “My grandmother would yell, ‘No, Joey, spread it.’ Go spread the faith.”

Mr. Biden has been spreading the faith across the country in recent days, undaunted by the polls and prognosticators forecasting a devastating defeat for his party in Tuesday’s midterm elections. Faith has been Mr. Biden’s calling card in his nearly two years in office — faith in the system in which he has been a fixture for more than half a century, faith that he could repair the fissures of a broken society, faith that he and he alone could beat former President Donald J. Trump if they face off again in 2024.

It is not a faith shared by everyone, not even among fellow Democrats, not even among his own advisers and allies, some of whom view the coming days with dread. After turning to Mr. Biden for a sense of normalcy two years ago following the turmoil of Mr. Trump, voters now appear poised to register discontent that he has not delivered it the way they expected, regardless of whether it was realistic in the first place.

History has rarely favored first-term presidents in midterm elections and Mr. Biden’s party does not even have to lose in a landslide for him to lose the presidency as he has known it. The turnover of just a handful of House seats and a single Senate seat will severely constrain his options going forward and raise questions about whether he should lead the Democrats into the next election.

And so these are frustrating, even perplexing times for Mr. Biden, who according to confidants had expected the fever of polarizing politics to have broken by now and was surprised that it had not. The presidency he envisioned, one where he presided over a moment of reconciliation, is not the presidency he has gotten. He thought that if he could simply govern well, everything would work out, which in hindsight strikes some around him as shockingly naïve if somewhat endearing.

“In the old days, when I was a United States senator, we’d argue like hell with one another, disagree fundamentally, and go down to the Senate dining room and have lunch together,” Mr. Biden reflected to an audience in San Diego last week. “Because we disagreed on the issues, but we agreed on the notion that the institutions matter.”

“Well, the institutions are under full-blown attack,” he added. “I’m already being told, if they win back the House and Senate, they’re going to impeach me. I don’t know what the hell they’ll impeach me for.”

Like other presidents in stressful moments, he has turned to Abraham Lincoln for inspiration. As he traveled in recent days, he brought with him “And There Was Light,” the new biography of the 16th president by Jon Meacham, the historian who has become a friend and outside adviser to Mr. Biden.

The State of the 2022 Midterm Elections

“One possible lesson for President Biden, who’s engaged in a profound battle to preserve the Constitution and the rule of law, is that moral commitment matters and can prevail, no matter how difficult the struggle,” Mr. Meacham said. “There will be bad days and good days. The key thing is to remember why you’re fighting for what you’re fighting for.”

The bad days often seem to outnumber the good days in this challenging autumn, although Mr. Biden, the self-described “wacko Irishman,” would hardly put it that way. “I’m optimistic,” he says regularly, even while outlining all the ways his optimism is taking a beating lately.

He does not indulge often in introspection, nor subject himself to much cross-examination about where he believes he has gone wrong, if in fact he does. He avoids interviews with major networks and newspapers, preferring friendlier questioners like the podcaster who told him mid-interview recently that “you’re the coolest guy in the world.”

As he approaches his 80th birthday this month, Mr. Biden’s life is less in his control than it has been in years. He starts his day at 8 a.m. with exercises, then heads to the Oval Office, returning to the residence around 7 p.m. for dinner with Jill Biden. Since she teaches in the morning, she goes to bed earlier, around 9:30 p.m., while he tells people that he stays up with his thick briefing book until around 11 p.m. He does not read much for pleasure, and when he watches television, it is mainly the news or sports.

He elliptically acknowledges the effects of age. During a conversation with the actors Jason Bateman, Sean Hayes and Will Arnett for their podcast “SmartLess,” Mr. Biden said he cannot skip workouts without penalty. “The thing I learned, the difference in age, if I let it go for a week, I feel it,” he said. “I used to be able to go for a week and nothing would change.”

Perhaps sharing more than his wife might prefer, the president confided that Mrs. Biden insists he combat the effects of age in other ways. “She gets very upset if I have not fully shaven, all this excessive amount of hair I have,” he said. “You know what I mean?”

His family remains an inseparable element of his life and his politics. Barely a speech on the trail goes by that he does not mention his son Beau, who died of brain cancer in 2015. His dad and mom are quoted with great regularity. He makes a point of texting or calling each of his seven grandchildren every day.

And so those around him know the most important voice in his ear as he contemplates what comes next is Jill Biden. While aides make tentative plans for a re-election campaign in case he opts for one, the president has not had extensive conversations about it with some of his closest aides. He insists to them, though, that Mrs. Biden is all-in if he wants to run, a self-justifying contention some view with skepticism.

In that sense, the return to the campaign trail this fall after a largely shelter-in-place Covid-19 campaign in 2020 has served as something of a test run of what a 2024 bid might look like.

He is not a rip-roaring speaker nor does he have the celebrity factor that electrifies a crowd beyond the trappings of the office. His crowds have been enthusiastic but nowhere near as large as his recent predecessors drew at similar points.

At an event in Hallandale Beach, Fla., one of his warm-up speakers had to goad the audience into showing a little more spirit. “Come on, people, let’s wake up!” exhorted Representative Debbie Wasserman Schultz, Democrat of Florida. “We got the president of the United States in the house. Come on, now! I know you got a little more energy than I hear.”

At a rally in Miami Gardens later that day, he was an hour late and the crowd, which had been there for hours to get through security, had faded by the time he was halfway through his speech, some even slipping out before he was finished.

Mr. Biden has adjusted his style lately, abandoning the lectern for a hand-held mic that lets him better project his voice, which is softening with age, and allows him to wander the stage, hand in pocket. But his speeches are peppered with familiar Biden-isms like “I’m serious” and “look folks” and “I really mean it.”

Mr. Biden seems to think he comes across as funnier than he does. “Not a joke!” he says again and again, four, eight, 10 times in a single speech. In San Diego last week, he told one audience that his remarks were “not a joke” a full 17 times — and threw in “I’m not joking” four more times. (A Biden speech is like a drinking game for political nerds — “Not a joke!” Drink!)

Indeed, Mr. Biden has always connected with audiences not through humor so much as humanity. His speeches are animated by stories of pain — his young wife and daughter killed in a car accident, his own near-death experience with two brain aneurysms, his son Beau’s death. He still summons the name of the nurse who took care of him in the hospital more than three decades ago.

“People understand that I understand loss and I think it’s so important that people understand that from that loss — the pain never goes away but you can do incredible things,” he said last week. “The person you lost never leaves your heart. I don’t know how many times I ask myself what would Beau do?”

Even now, his childhood struggles with stuttering define him. To this day, he divides his speech texts with hash marks, a technique he learned to make public speaking earlier. And the insecurities that come from it are never far from the surface. He brought it up last week seemingly at random.

Anticipating the next few days, Mr. Biden refuses to concede defeat. He was encouraged by the energy of Saturday night’s rally in Pennsylvania with former President Barack Obama and Lt. Gov. John Fetterman, the Senate candidate, as well as positive indicators from Arizona and New Hampshire.

His mood, aides said, is one of fighting through the tape. But if he takes a licking on Tuesday, they said, he will own it and move ahead. In a life of falling and getting back up, it would be one more stumble, not the end. On that at least, he has faith.