The Perfect Enemy | Biden and Netanyahu Gear Up for a Complicated New Era
Skip to content
December 10, 2022
Read Time:9 Minute 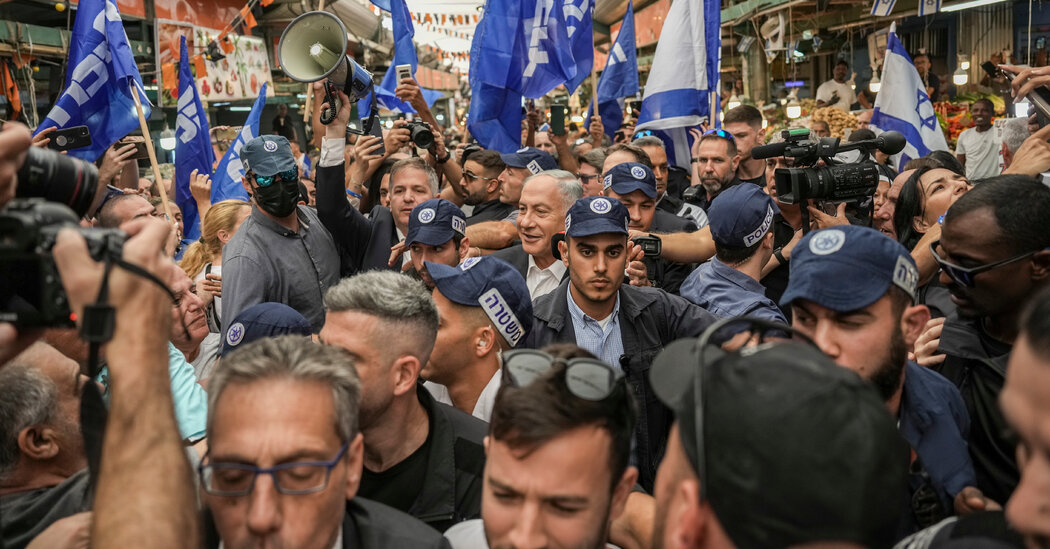 The two leaders have forged a relationship over four decades that vacillates between warmth and combat.

Mr. Biden had vanquished former President Donald J. Trump, who was a close ally of Mr. Netanyahu, and the new American president made clear that one of his first foreign policy initiatives would be to restart the Iran nuclear deal that the Israeli prime minister hated, and consistently sought to undermine.

Meanwhile, in Israel, Mr. Netanyahu faced charges of bribery, fraud and breach of trust. Within months, he would be ousted from office after more than a dozen years as the leader of the Jewish state.

Now, the tables have turned.

Mr. Biden’s hopes for a nuclear deal with Iran have all but collapsed, and Iran has begun supplying missiles and drones to Russia for use in Ukraine. Polls suggest the president faces a stinging rebuke in midterm elections next week that may end his domestic legislative agenda. Mr. Trump remains a potent force in American politics, likely to run again in 2024.

And on Thursday, Mr. Netanyahu secured his own return to power with a new, far-right coalition that will once again make him prime minister — an endorsement of the aggressive, in-your-face style that has been at the heart of his clashes with Mr. Biden and other American presidents over the years.

The two leaders will find themselves in the position of sparring anew over issues that have long strained their relationship.

It is the most complicated of relationships, vacillating between warmth and combat, sometimes on the same day. But Dennis Ross, the former Mideast negotiator who used to accompany Mr. Biden, when he was vice president, on trips to see Mr. Netanyahu, noted in an interview on Thursday that the relationship was better than the one between Mr. Netanyahu and President Barack Obama.

“He viewed Biden as someone who he would disagree with, but that Biden’s heart and emotions were all with Israel,” said Dennis Ross, who oversaw Mideast diplomacy at the National Security Council in Mr. Obama’s presidency.

Disagreements remain. The president favors a Palestinian state to resolve the decades-long clash with Israel. Mr. Netanyahu does not. The Israeli prime minister called the 2015 Iran nuclear deal a disaster for Israel and the region. Mr. Biden said it was the best way to keep Iran from developing nuclear weapons. And the two men have been at odds for years over the construction of Israeli settlements in Palestinian territory.

The State of the War

But in the 16 months since Mr. Netanyahu was ousted and then returned to power, the world has changed. Iranian leaders, preoccupied by protests at home, seem uninterested in returning to the nuclear deal from which Mr. Trump — to the delight of Mr. Netanyahu — withdrew in 2018.

Meanwhile, Iran is supporting President Vladimir V. Putin’s war in Ukraine, selling drones and missiles to Russia for use on the battlefield. And the frequent source of tension, the future of a Palestinian state, is barely on the agenda these days, in part because of divisions within the Palestinian leadership.

During Mr. Trump’s four years in office, Mr. Netanyahu faced little pressure from the United States to bend to the will of an American president. Mr. Trump never challenged Mr. Netanyahu’s campaign of sabotage and assassination in Iran, or his refusal to pursue a two-state solution with the Palestinians. The relationship between the two leaders did not seem to fray until Mr. Netanyahu congratulated Mr. Biden for his victory in 2020, leading the former president to accuse his Israeli counterpart of disloyalty.

Mr. Netanyahu had held off calling to congratulate Mr. Biden for several hours, worried about angering Mr. Trump, the candidate he openly preferred. But the delay did little good in the end. Mr. Biden returned the favor, taking weeks to hold a first phone call with Mr. Netanyahu. And, partly because of Covid-19 lockdowns, the two men did not meet in person before Mr. Netanyahu lost office.

As vice president, Mr. Biden often found himself at odds with Mr. Netanyahu or his government.

More than a decade ago, according to former officials, it was Mr. Biden who complained during a Situation Room meeting that Israel, under Mr. Netanyahu’s leadership, had been too hasty in updating secret computer code to sabotage Iran’s Natanz nuclear enrichment plant. The malware spread around the world, its revelation leading to the unraveling of the story of a covert program, code-named Olympic Games, run by both countries.

At other times, Mr. Biden voiced concerns that Israel’s assassination of nuclear scientists was undercutting the effort to reach a diplomatic deal to limit its production of nuclear material.

The disagreements over policy between Mr. Biden and Mr. Netanyahu sometimes seemed to stoke personal animosities.

On a visit to Israel in March 2010, Mr. Netanyahu’s government announced the construction of new settlement projects in East Jerusalem, territory that would have been up for negotiation over the boundaries of a Palestinian state. Mr. Biden, who had just hours earlier gushed effusively about the security relationship between the two nations, was surprised by the announcement — and angry.

That night, Mr. Biden delayed his arrival at a dinner with Mr. Netanyahu and his wife for more than 90 minutes, a diplomatic rebuke intended to make his displeasure clear. (Mr. Netanyahu maintained he was not involved in the decision on settlements or the timing of the announcement during Mr. Biden’s visit.)

After Mr. Netanyahu was ousted by his party in 2021, he lashed out at the Biden administration in his final speech, comparing the hesitance to confront Iran’s nuclear program to the failure by a past American president to more quickly confront Hitler during World War II.

“In 1944, at the height of the Holocaust, U.S. President Franklin Delano Roosevelt refused to bomb the railway leading to the extermination camps, and refused to bomb the gas chambers, which could have saved millions of our people,” Mr. Netanyahu said.

The relationship between Mr. Netanyahu and Mr. Biden goes back decades, to when Mr. Biden was a member of the Senate Foreign Relations Committee and Mr. Netanyahu was the deputy Israeli ambassador in Washington.

Mr. Biden has often spoken fondly of Mr. Netanyahu since then, despite their political differences, and once described giving him a photograph with a warm caption: “Bibi, I don’t agree with a damn thing you say, but I love you.”

After Mr. Netanyahu became prime minister in 1996 and then lost the position three years later, Mr. Biden was the only American politician to write him a letter after his election defeat, Mr. Ross said. During moments of heightened friction between Mr. Netanyahu and Mr. Obama, it fell to Mr. Biden to play peacemaker.

But there have been sharp moments when the differences came into open view.

In 2015, Mr. Biden declined to attend an address that Mr. Netanyahu delivered in Congress after the Israeli leader accepted an invitation from the House speaker, John A. Boehner, a Republican, without notifying the White House. The speech was devoted to opposing the Iran nuclear deal, and Mr. Biden’s absence exacerbated the dispute between Mr. Netanyahu and the Obama administration about the wisdom of the deal.

That deal did freeze Iran’s activity for several years, until it was unwound by Mr. Trump, and the Iranians resumed nuclear fuel production.

As president, Mr. Biden used his early political capital to seek a return to the deal that Mr. Trump trashed. He pushed forward at a time when Mr. Netanyahu was politically weak. But even during those moments, Mr. Biden vowed to stand with Israel, whoever its leaders might be.

That was on display during Mr. Biden’s visit to Israel in mid-July, when he met with the government of Yair Lapid.

Mr. Biden was clearly relaxed and enjoyed the trip, especially in comparison to his next stop, in Saudi Arabia. He went to see Mr. Netanyahu, in what was described as a warm but brief meeting. Later, Mr. Netanyahu said he had told Mr. Biden that the United States needed to threaten Iran with more than economic sanctions or a defensive military partnership between Middle Eastern states.

“We need one thing,” he said. “A credible offensive military option is needed.”

Mr. Netanyahu will undoubtedly press that point as prime minister, now that negotiations on re-entering the nuclear deal are stalled. With Iran producing more and more uranium enriched at near bomb-grade levels, he will surely call for more sanctions and more threats of military action. And with little prospect of a diplomatic solution, Mr. Biden may have less room to push back.

Mr. Biden, for his part, will likely press Israel to declare itself on the side of containing Russia, a step Israel has refused to take, saying it needs to work with Moscow in Syria.

Each of these problems has a different shape than when Mr. Biden came to office. History suggests that the inevitable tensions with Mr. Netanyahu, born of different national interests, are nonetheless bound to emerge quickly.