National Security Minister Itamar Ben Gvir announced on Sunday that he would appoint Israel Police Assistant Commissioner Kobi Yaakobi to be his security secretary, a role that involves coordinating between the force and the ministry.

Yaakobi , who currently serves as a senior officer in the Jerusalem District, previously commanded the police response to weekly demonstrations against Prime Minister Benjamin Netanyahu during his last term in office.

The “Balfour” protests, named after the address of the Prime Minister’s Residence in Jerusalem, sometimes saw violent clashes between police and protesters and with police being accused of using disproportionate force.

In 2020 Yaakobi met with some of those who regularly attended rallies and said he takes personal responsibility for the “most difficult decisions at the demonstrations” including the controversial arrests of former air force general Amir Haskel and Shoshke, an entertainer dressed in a body suit depicting a naked female woman.

Yaakobi also reportedly gave his full backing to then Chief Superintendent Niso Guetta who was filmed beating a protester.

Yaakobi reportedly told those present that a video of Guetta was a setup in which demonstrators deliberately provoked him into striking out while a camera recorded the incident. Guetta was convicted in June 2022 of two accounts of assault. 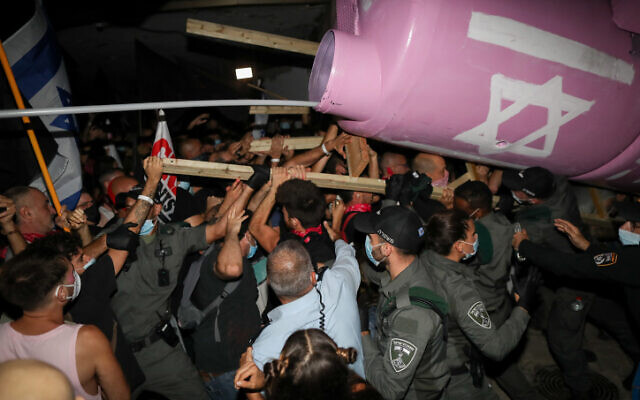 Israelis clash with police during a protest march against prime minister Benjamin Netanyahu in Jerusalem on their way to his official residence on Balfour Street. September 5, 2020. (Yonatan Sindel/Flash90)

However, despite the criticism, sources within police told Channel 13 that Yackovi is considered level-headed, principled, and responsible.

It was the first police appointment by Ben Gvir who is expected to make a series of such changes, including one for the deputy police commissioner, and apparently also for commanders of the Jerusalem District and the Southern District, according to the Haaretz report.

Yackovi is 49, lives in Jerusalem, and has a master’s degree in criminology, Channel 13 reported.

Ben Gvir, leader of the far-right Otzma Yehudit party, was granted extended powers over police as part of coalition agreements. He has vowed stronger backing for police for actions taken in the line of duty.