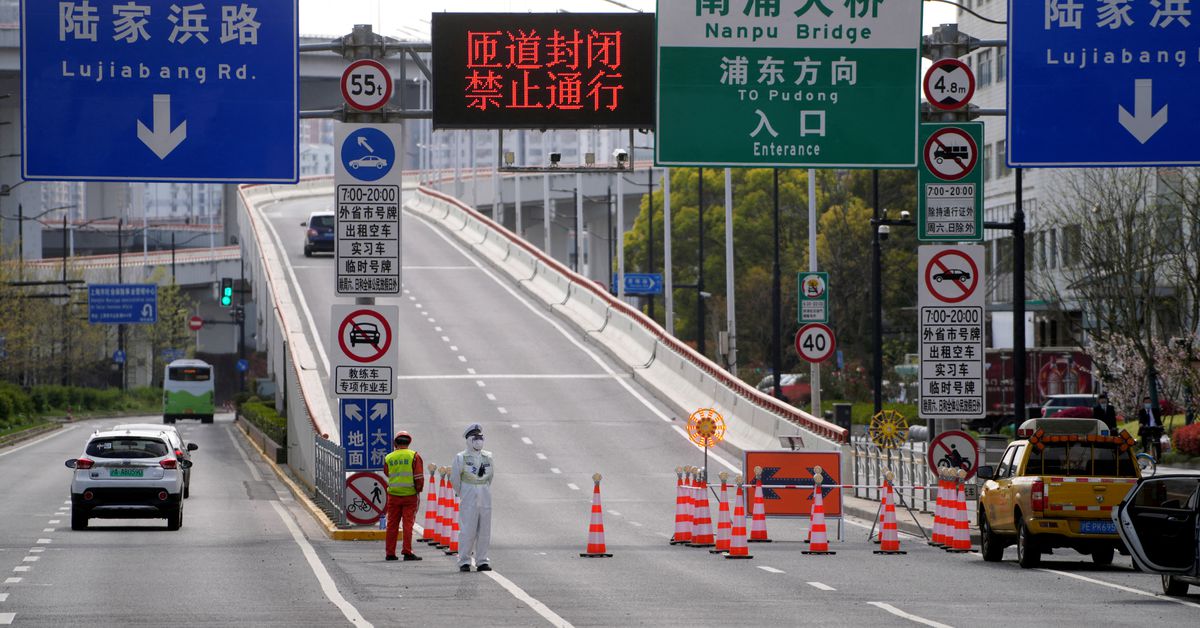 A police officer in a protective suit keeps watch next to a bridge leading to the Pudong area across the Huangpu river, after traffic restrictions amid the lockdown to contain the spread of the coronavirus disease (COVID-19) in Shanghai, China March 28, 2022. REUTERS/Aly Song

SHANGHAI, May 9 (Reuters) – Aptiv (APTV.N) stopped shipping over the weekend some parts from a Shanghai plant that supplies Tesla Inc(TSLA.O) and General Motors Co(GM.N) after COVID-19 infections were found among its workers, two people familiar with the matter said on Monday.

The suspension of shipments from Aptiv could represent a setback to Tesla, which had planned to bring output in Shanghai back to the levels before the city locked down to control a wave of infections and forced a shutdown through much of April.

Aptiv, in a statement to Reuters,did not comment on the status of its Shanghai plant or whether there had been infections among workers.

“The safety of our employees is our first priority,” Aptiv said. “We have been in touch with our customers and are working closely with them.”

Tesla and GM did not immediately respond to a request for comment.

Tesla restarted production at its Shanghai plant on April 19, with the help of the city government after a 22-day closure, the longest since the factory opened in 2019. The plant makes Tesla’s Model 3 and Model Y for the China market and exports.

Aptiv had won approval to restart its factory in late April by implementing a “closed-loop” system in which workers are isolated. When it was unable to proceed last month to coincide with Tesla’s restart, the delay forced the U.S. EV maker to find more inventory of wire harness, a person with knowledge of the situation said.

Wire harnesses are parts that bundle together cables that can stretch to up to 5 kilometers (3.1 miles) in the average car. Unique to each car model, vehicles cannot be built without them.

The disruption to Tesla’s Shanghai plant has been one of the highest profile consequences of China’s measures to control its biggest COVID-19 outbreak, which have also crimped consumption, including vehicle sales.

Shanghai authorities have tightened a city-wide lockdown imposed more than a month ago on the commercial hub with a population of 25 million, a move that could extend curbs on movement through the month.