The Perfect Enemy | A Paxlovid fall primer: Who should take the COVID antiviral and when?
Skip to content
September 29, 2022
Read Time:5 Minute 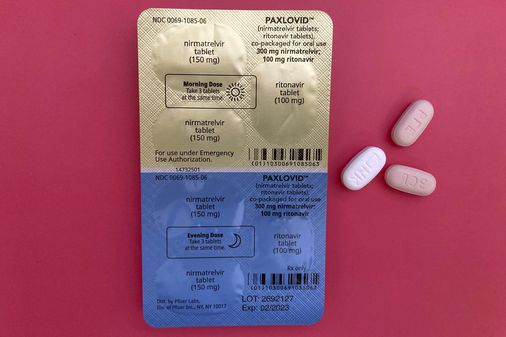 With many people heading back to school and the office, and cooler weather soon likely to lure more indoors, the number of COVID-19 infections this fall is expected to rise.

Paxlovid, an antiviral medication shown to significantly decrease the risk of serious COVID complications, has become the most popular treatment with over 4 million prescriptions written in the United States since federal regulators authorized the drug last December.

But it’s not designed to help everyone. And several recent studies highlight some caveats. Here’s the latest.

Who should take Paxlovid?

The medication is an at-home treatment, a series of three pills taken twice a day for five days. It’s designed to be given at the first sign of infection, and authorized for adults and children 12 years and older weighing at least 88 pounds who are at high risk of serious COVID complications. But the interpretation of what constitutes “high risk” has expanded since Paxlovid’s early days, when the guidance included older adults and those with serious illnesses, such as cancer, heart disease, diabetes, and patients with weakened immune systems. The list from the Centers for Disease Control and Prevention for what constitutes high risk now spans more than 20 medical conditions, including people who are physically inactive, those who are overweight, and individuals with any disability that makes it more difficult for them to interact with the world around them.

That has caused some confusion.

“I have had younger people [with no underlying health problems] who don’t want to be sick for a day or two call for it and I caution them against it,” said Dr. Jason Salter, a family medicine physician at Southcoast Health in Fall River. “The current variant is relatively moderate, and if they are otherwise healthy, they can weather the storm.”

The medication comes with a long list of other drugs that may not be taken at the same time, and it can also produce some unpleasant side effects, such as diarrhea, so Salter and other physicians say they weigh the benefits and risks with patients.

Who does not benefit from Paxlovid?

A recent study from researchers in Israel found the medication significantly reduced hospitalizations and deaths among adults 65 and older with COVID, compared to a similar group that did not receive the drug. But it found little evidence of benefit among younger adults, ages 40-64, who had COVID and were deemed at high risk for severe complications. The findings, published in the New England Journal of Medicine, included data from more than 109,000 patients at a large health care organization.

Pfizer, the pharmaceutical company that manufactures Paxlovid, found in its own research that the treatment did not appear to significantly lower rates of hospitalization or death in adults who were not a high risk for serious complications.

“People who test positive and have no fever, no cough, and just a runny nose and congestion, I have been saying to them to hold off on Paxlovid and see how they feel over the next couple of days,” said Dr. Paul Sax, clinical director of the division of infectious disease at Brigham and Women’s Hospital. “For that group, with very mild symptoms, I think it’s optional, even if they have risk factors.”

What about Paxlovid rebound?

Many people, including such high-profile patients as President Biden and Dr. Anthony Fauci, Biden’s top medical adviser, have reported that after finishing their five-day course of Paxlovid, feeling better, and testing negative, they then test positive again a few days later.

That’s prompted some doctors to offer a second course of treatment, though the CDC has said there is “currently no evidence that additional treatment” is needed.

A Pfizer spokesman said the company is working with the Food and Drug Administration to address the open question about additional treatment and is finalizing protocols for a study of patients “who may be in need of retreatment.”

Meanwhile, he said, the company is studying 10- and 15-day dosing options for COVID patients with symptoms who have a compromised immune system.

Paxlovid rebounds are “just something to keep an eye on but not to be alarmed by,” said Dr. Michael Charness, chief of staff at the VA Boston Healthcare System. Charness is coauthor of recent research in the New England Journal of Medicine that suggests such rebounds are not uncommon and that patients who rebound can have high levels of virus capable of infecting others.

Paxlovid aside, another recent study not yet peer-reviewed found that 27 percent of patients who were not treated with the antiviral also experienced a rebound of symptoms after they had improved. But the researchers found that very few of the rebounders had a return to high virus levels as was found in studies by Charness and others of Paxlovid rebounds.

The CDC advises people with a recurrence of COVID-19 symptoms, or a new positive test after having tested negative, to isolate again for at least five days, and they should wear a mask for a total of 10 days after rebound symptoms start.

What about side effects?

The medication also interacts poorly with many other drugs commonly taken by the very patients who most need it, including statins, medicines for hypertension, as well as those that treat gout, angina, and various psychiatric problems. Doctors advise patients to discontinue certain medications while taking Paxlovid and for a couple days afterward. Patients on some medications are not able to take Paxlovid.

One other caveat from Chaoui. “I always say, if you are on birth control pills, use an additional method of contraceptive while taking Paxlovid,” he said. “That also happens with antibiotics. It decreases the effectiveness of the contraception.”

Can Paxlovid reduce the risk for long COVID or ease its symptoms?

Finding treatments for persistent, debilitating symptoms long after the illness remains an urgent issue, as the CDC reports that nearly one in five Americans struggles with long COVID. Some anecdotal reports and research have suggested Paxlovid might be helpful but much more study is needed.

“Theoretically it may reduce the risk of long COVID, as the risk is higher with greater disease severity. But there are no data as yet supporting this claim,” said Sax, from Brigham and Women’s.

Sax noted a recent study, published in Clinical Infectious Diseases, that identified an ongoing viral reservoir in people with long COVID. Sax said that if such a reservoir is actively replicating, then antiviral therapy may help.

How to get Paxlovid

The medication requires a prescription from your doctor. Alternatively, free telehealth consultations are available for Massachusetts residents and insurance is not required. Pfizer said it expects to have ample supplies this fall.