In a recent study published on the bioRxiv* preprint server, researchers discuss a robust method to identify mutations that simultaneously improve the expression and stabilize the prefusion conformation of the severe acute respiratory syndrome coronavirus 2 (SARS-CoV-2) spike (S) glycoprotein. 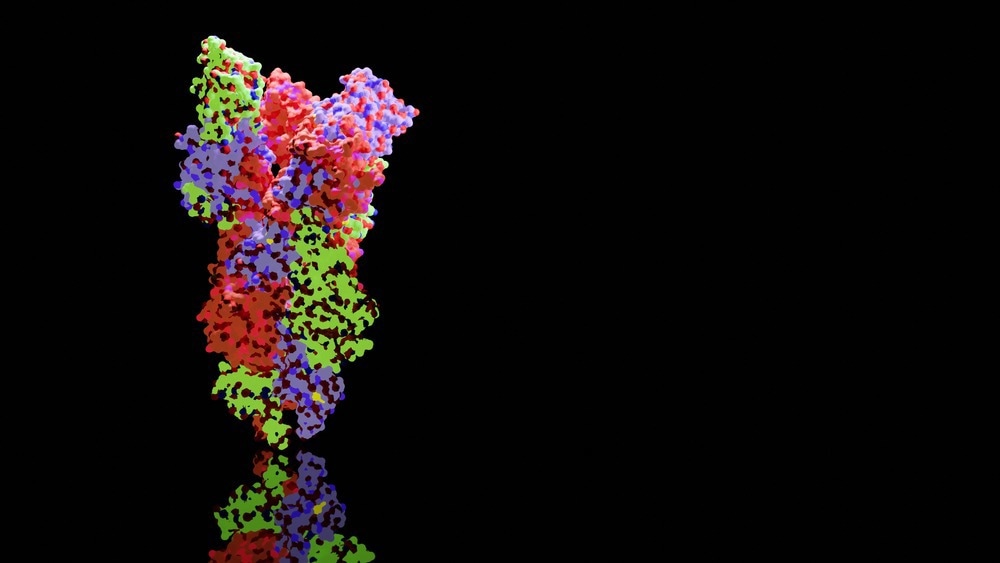 Most coronavirus disease 2019 (COVID-19) vaccines require prefusion-stabilized SARS-CoV-2 S protein as an immunogen for enhanced efficacy against this virus. K986P and V987P S mutations, for example, stabilize its pre-fused conformation.

All methods that are currently used to engineer prefusion-stabilized S-based vaccine immunogens involve tedious experimental work and rely on structural information. The structural determination and subsequent expression, purification, and characterization of each S mutation are laborious, thus hindering their quick identification.

Previous studies have shown that several other mutations could also improve SARS-CoV-2 S expression. For example, an S construct known as HexaPro containing F817P, A892P, A899P, and A942P mutations, in addition to K986P and V987P, has been shown to prove S expression.

In the present study, researchers describe a novel high-throughput approach to measure the fusogenicity of an array of SARS-CoV-2 S mutations in parallel, all of which could potentially stabilize its pre-fusion conformation without relying on structural information.

The researchers constructed a DMS library comprised of amino acid mutations from residues 883 to 1034 of membrane-bound S protein and used it for encoding and expressing one S mutant in a HEK293T landing pad cell. All S-expressing cells also expressed mNeonGreen211 (mNG211) and were termed S-expressing cells.

A stable cell line that expresses human angiotensin-converting enzyme 2 (hACE2) and mNG21-10, which was named hACE2-expressing cells, was also developed.

Three and two biological replicates were used for the expression and fusion assays, respectively. An adjusted fusion score that represented the residual of a linear regression model of fusion score on expression score was also obtained.

Except for F817P, all other mutations in HexaPro present in the DMS library were screened. The DMS data consistently showed that A899P had minimal influence on S expression, whereas A892P and A942P markedly increased its expression. 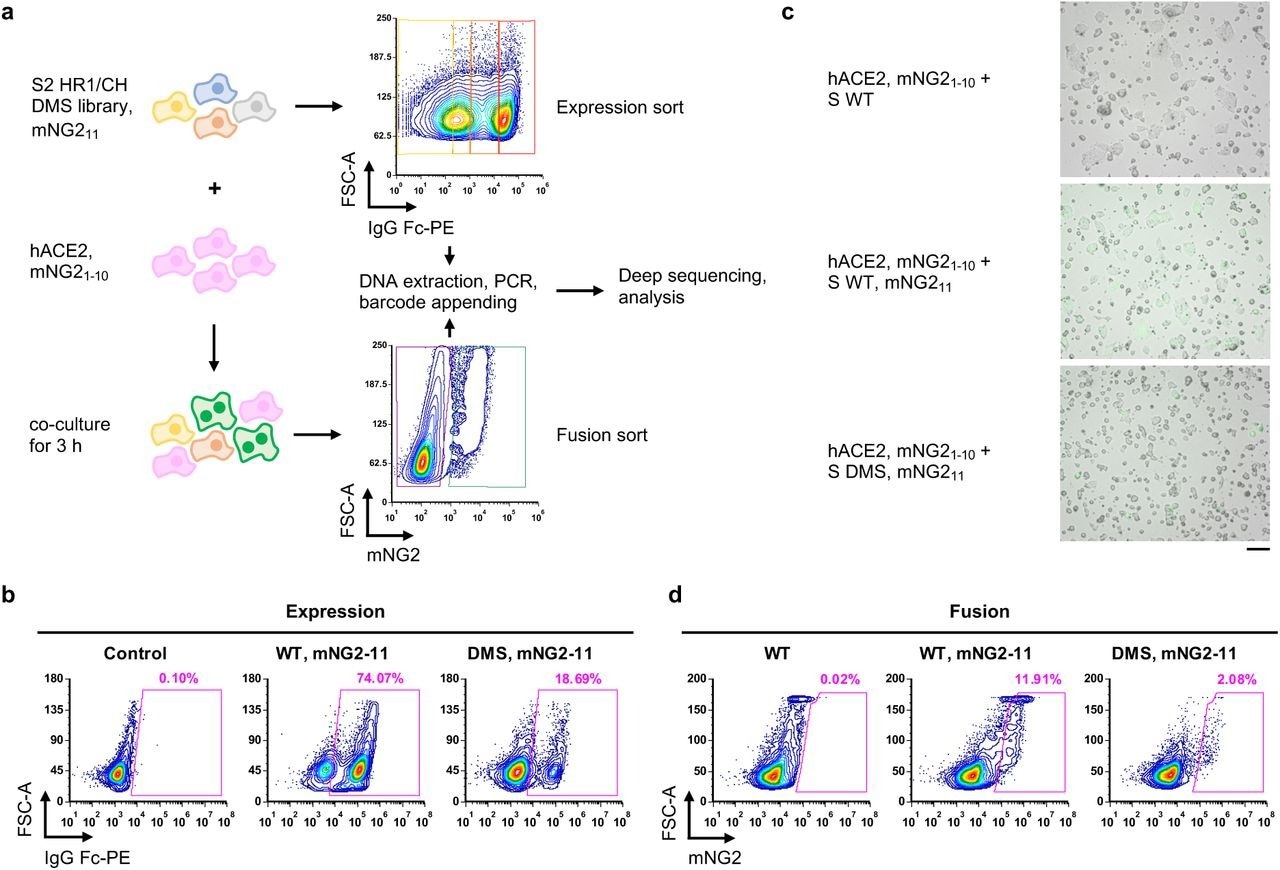 Among biological replicates, the Pearson correlation coefficient of expression scores ranged from 0.72 to 0.79, whereas that of fusion scores was 0.61, thus confirming the reproducibility of the DMS experiments. 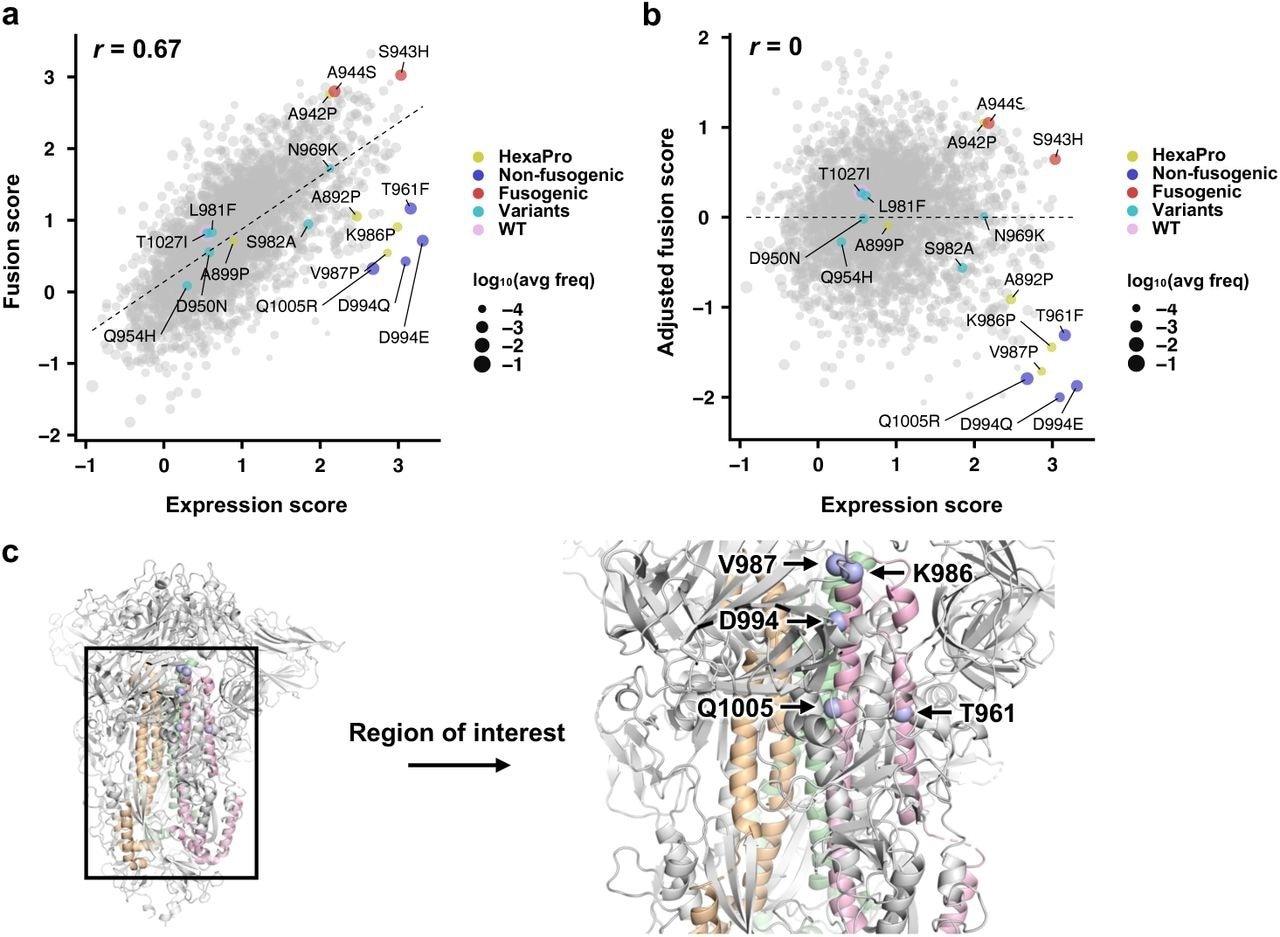 Expression and fusion scores of individual mutations in the DMS library. a, Plot of fusion score against expression score for each mutant is shown. WT is indicated in pink. Mutations used in HexaPro24 are in yellow. Representative fusion-incompetent mutations identified in this study are in purple (non-fusogenic). Representative mutations that enhance S fusogenicity are in red (fusogenic). Mutations found in major SARS-CoV-2 variants (Extended Data Table 1) are in teal (variants). Each data point represents one mutation in the DMS library. Individual data points are sized according to average frequency of the corresponding mutations. b, Plot of adjusted fusion score against expression score for each mutant is shown. Pearson correlation coefficient, r, is shown in a,b. c, Locations of fusion-incompetent mutations are indicated by light blue spheres. Regions that are mutated in the DMS library are colored wheat, green and pink for each monomer.

The fusion assay measured the fusogenicity at the cellular level, rather than at the single-molecule level. Moreover, the fusion score positively and consistently correlated with the expression score.

Mutations with a low adjusted fusion score and high expression score included K986P and V987P, both of which are used in current COVID-19 vaccines, thus demonstrating that the study method could identify prefusion-stabilizing mutations.

In addition to K986P and V987P, the study method identified other mutations in HR1 and CH which had low adjusted fusion and high expression scores, of which included T961F, D994E, D994Q, and Q1005R. Notably, D994E and D994Q clustered at the same amino acid residue positions and were chemically similar. 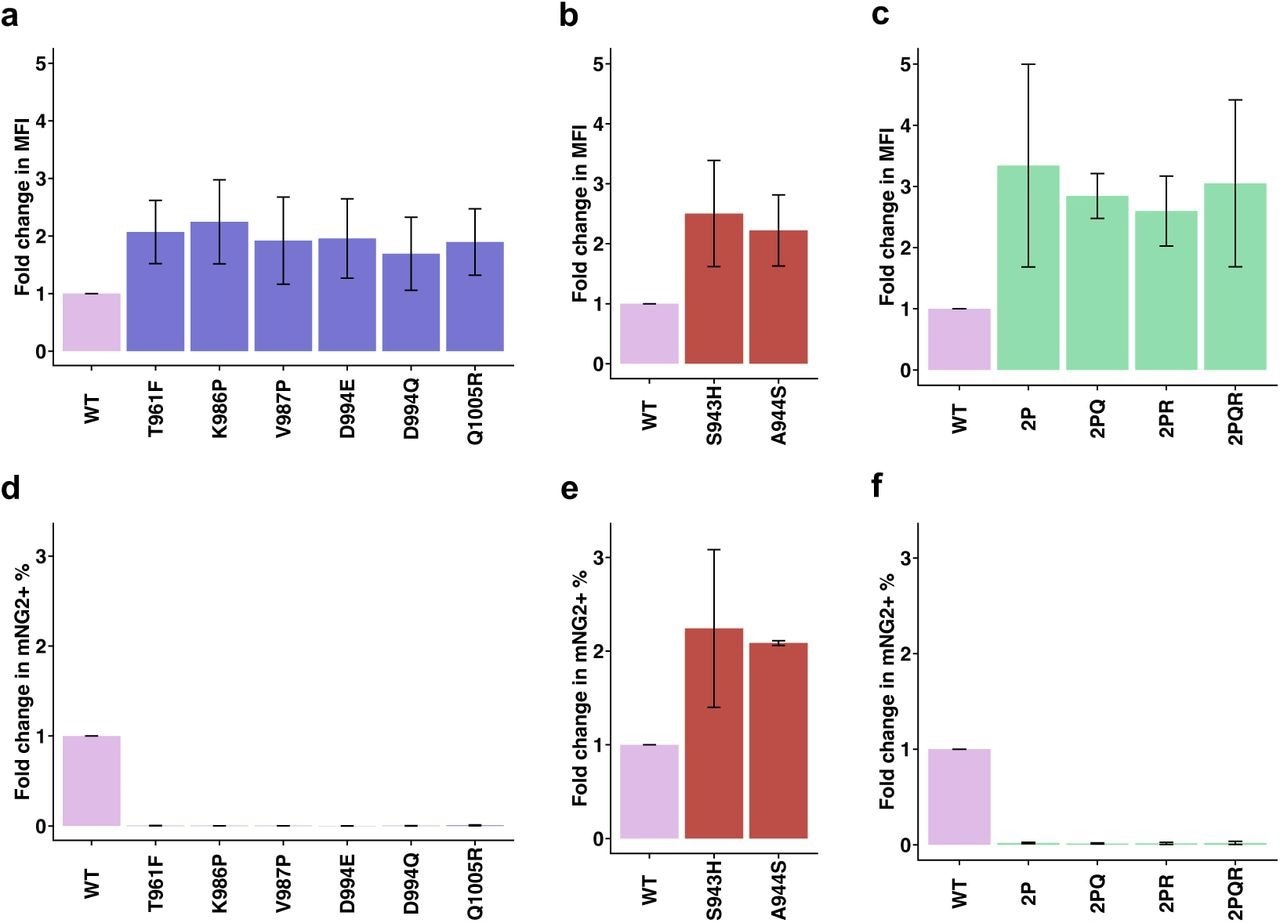 Multiple HR1 and CH mutations, including those found in SARS-CoV-2 variants, did not negatively impact the expression or fusogenicity of the S protein. HR1 and CH were associated with high degrees of evolutionary conservation among betacoronaviruses.

Most SARS-CoV-2 neutralizing antibodies target the receptor-binding domain (RBD) region of the S protein; therefore, HR1 and CH may be under low selection pressure. Another explanation for this observation is that other evolutionary constraints on HR1 and CH might be present in vivo.

Given that prefusion-stabilization of S protein is critical for viral immunogen design, the study results have profound implications for COVID-19 vaccine development. Furthermore, the findings highlight that the evolutionary constraints of S2 are relevant to SARS-CoV-2 antigenic drift and the designing of universal coronavirus vaccines.

Nevertheless, future studies should continue to investigate the relationship between S protein expression, fusogenicity, and SARS-CoV-2 replication fitness to determine the biophysical processes that contribute to SARS-CoV-2 evolution.

The prefusion-stabilizing mutations of betacoronavirus S proteins were first reported in 2010, long before the COVID-19 pandemic began. This helped accelerate the development of COVID-19 vaccines, in addition to advancements in messenger ribonucleic acid vaccine technology.

The next pandemic could be due to a virus for which there is a lack of this type of information. Thus, maximizing the speed of vaccine immunogen design to accelerate vaccine development technology for yet-to-emerge viruses with the potential to cause pandemics is imperative.

bioRxiv publishes preliminary scientific reports that are not peer-reviewed and, therefore, should not be regarded as conclusive, guide clinical practice/health-related behavior, or treated as established information.