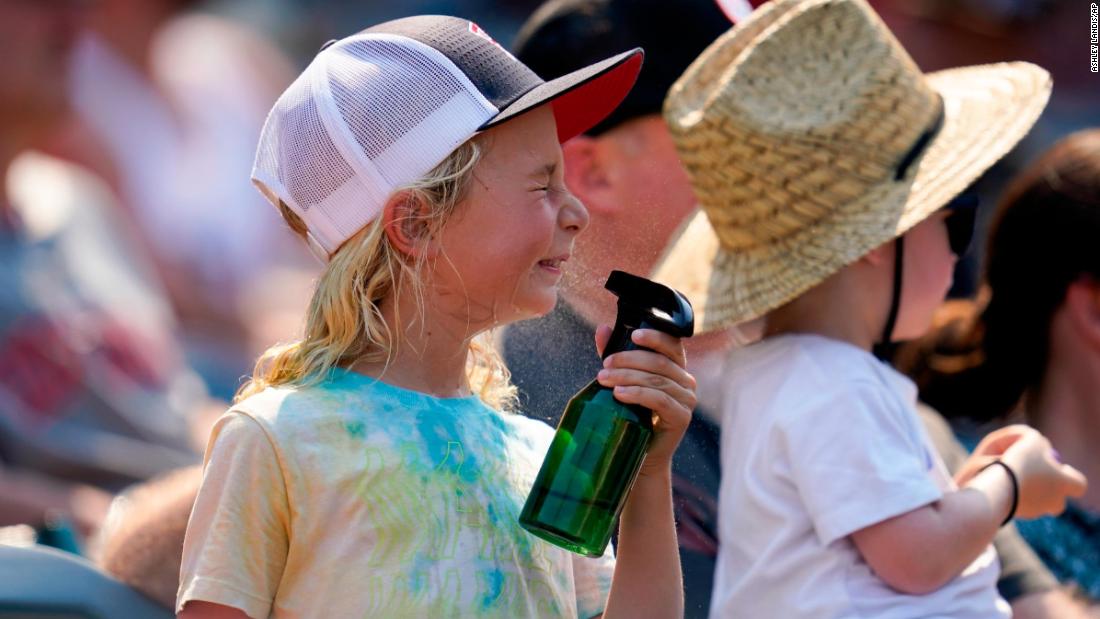 Here’s what else you need to know to Get Up to Speed and On with Your Day.
(You can get “5 Things You Need to Know Today” delivered to your inbox daily. Sign up here.)

The heat wave scorching the western US is on track to maintain its intensity over the next few days. In California, the operator that manages most of the state’s power grid issued an alert Thursday calling on residents to set thermostats to 78 degrees or higher, avoid using major appliances and turn off all unnecessary lights in the evening. In neighboring Nevada, residents have also been urged to reduce electricity usage due to a significant reduction in the available energy supply. The National Weather Service said the heat will end “abruptly and unusually” in some parts of Southern California after a rare hurricane makes a close pass by the region. Climate experts say the storm will likely create an alarming combination of extreme heat, flash flooding, damaging offshore winds and an increased fire threat through Saturday.

The two brothers identified as suspects in connection with a mass stabbing in Canada this week have died. One of the brothers was found dead a day after the attacks, which left 10 dead and 18 others injured in Saskatchewan, Canada, police said. The other brother died Wednesday after going into “medical distress” after his arrest, authorities said. The 10 victims ranged in ages from 23 to 78 years old, and all but one are from the Indigenous community of James Smith Cree Nation. It remains unclear what motivated the stabbings and how or whether the brothers knew any of the victims. Police say some of the victims were apparently targeted while others may have been attacked randomly.

A shooting rampage in Memphis, Tennessee, left four people dead and three others wounded across multiple crime scenes on Wednesday. A 19-year-old suspect was arrested after streaming at least one of the attacks on Facebook Live, police said. The shootings prompted authorities to issue a citywide shelter in place order as police searched for the gunman. The Memphis Area Transit Authority also suspended bus and trolley service Wednesday, citing danger from the shooter. Memphis Mayor Jim Strickland expressed anger over the spate of violence at a press conference. “I am angry for our citizens,” he said. “The people of our city were confronted with the type of violence no one should have to face.”

The CDC is now rolling out updated Covid-19 vaccine boosters following the FDA’s authorization late last month. These shots will replace the boosters previously offered in the US for people 12 and older and will target both the original strain of Covid-19 and the Omicron subvariants. With many Americans wondering whether they should get the booster now or wait, some medical experts advise getting the shot soon if you have not been vaccinated in 2022 and have not had a recent infection. CDC guidelines say people who recently recovered from Covid-19 can wait three months from their infection to get the booster because reinfection is unlikely immediately after recovery.

Steve Bannon, a former aide to ex-President Donald Trump, is expected to surrender later today and plead not guilty on charges related to an effort to raise money to fund the construction of a wall along the southern US border. The New York state charges allege Bannon and three others defrauded donors in the border wall effort, which raised more than $25 million. The Manhattan district attorney’s office launched a criminal investigation into Bannon’s “We Build the Wall” crowd-fundraising activities early last year after then-President Trump pardoned Bannon on federal fraud charges relating to the same alleged scheme. Presidential pardons, however, do not apply to state investigations.

CMA Awards 2022: See who is nominated
Country music fans! Here’s the full list of nominees for the awards, which will air on November 9.
Why Coca-Cola doesn’t want to tell you what’s in those weird flavors
Coke recently debuted new drinks with vague descriptions and let fans fill in the blanks. The responses were all over the map.
Jerry Seinfeld is a fashion model. The internet has thoughts
A trendy streetwear brand selected the 68-year-old comedian as the face of its new collection. Check out Seinfeld’s photo shoot here.
2022 NFL season preview
Finally! The wait is over. Here are the teams you should keep an eye on this football season.
Most stylish new hotels and spas for 2022 revealed
Take a moment to marvel at these peaceful destinations created by world-renowned architects.

That’s the starting price of Apple’s new iPhone 14, which is the same price as last year’s model. The new smartphones offer better battery life and camera functionality, and also include a new satellite connectivity feature intended to help people communicate in emergency situations when their cell service isn’t working.

“If the two of us can end up on the walls of the most famous address in the world, then, again, it is so important for every young kid who is doubting themselves to believe that they can too. That is what this country is about.”
— Former first lady Michelle Obama, speaking on Wednesday after official White House portraits were unveiled of her and former President Barack Obama. Ceremonies for the unveiling of White House portraits are typically hosted by a former president’s immediate successor, but ex-President Trump did not hold a ceremony for the Obama portraits while he was in office.