Former President Donald Trump is expected to announce today that he will run for president in 2024, according to one of his advisers familiar with the matter. Many Republicans, however, have expressed opposition to another Trump presidency following numerous controversies and poor midterm performances by Trump-endorsed candidates. In a newly released interview, former Vice President Mike Pence also distanced himself from his former boss, saying he thinks “we’ll have better choices in the future.”

In one of the most closely watched midterm races, Democrat Katie Hobbs will become Arizona’s next governor, CNN projects. She will defeat one of the most prominent defenders of former President Donald Trump’s lies about the 2020 election. Her challenger, Republican Kari Lake, had repeatedly said she would not have certified President Joe Biden’s win in Arizona in 2020 and began baselessly sowing doubts about the governor’s race before it was called. Hobbs’ projected victory is a major win for Democrats in the battleground state that is turning more purple. Arizona is among four states that have flipped control of governorships: Arizona, Maryland and Massachusetts for Democrats; Nevada for Republicans.

Classes at the University of Virginia remain canceled today as the school “continues to work through the emotional toll” of Sunday’s shooting that left three football players dead and two other people injured. The alleged 22-year-old gunman was arrested Monday about 80 miles east of Charlottesville, Virginia. Police have not yet shared a motive for the attack. The three football players who died in the shooting have been identified, including one junior who was a top wide receiver for the school this season. The university held a candlelight vigil Monday, drawing hundreds to the campus, as seen in this photo posted by the school’s football team. At least 68 shootings have unfolded this year on US school grounds, including 15 on college campuses, CNN data shows.

Several airlines have been forced to pay more than $600 million in refunds to passengers for canceled or changed flights since the start of the Covid-19 pandemic, the Department of Transportation announced this week. The department is also issuing more than $7 million in fines against six airlines for the “extreme delays in providing those refunds to passengers,” Transportation Secretary Pete Buttigieg said. Meanwhile, understaffed airlines are struggling to keep up with a rapid rise in demand for air travel and say they are bracing for a holiday vacation surge next week. More than 54 million people in the US are expected to travel over the Thanksgiving holiday period, according to AAA. If you have a flight booked in the near future, travel analysts recommend reserving airport parking spaces beforehand and allocating extra time for longer-than-usual TSA lines.

Health officials say they’re planning to push this week for people to get boosted against Covid-19 in order to offer maximum protection around Thanksgiving, but overall uptake remains low. Just 10% of people ages 5 and older have received an updated booster dose, despite 73% of that population having gotten their first two shots, according to data from the CDC. Additionally, a new study published Monday said higher Covid-19 vaccination rates among US children could prevent thousands of pediatric hospitalizations and millions of missed school days. Preventing Covid hospitalizations would also help ease the strain on pediatric hospitals, which have been dealing with an increase in flu and RSV cases for several weeks as the respiratory virus season sweeps the US earlier than usual.

President Volodymyr Zelensky presented a 10-point peace plan to end Russia’s invasion of Ukraine in a video speech to G20 leaders today. The steps include a path to nuclear safety, food security, and a special tribunal for alleged Russian war crimes, according to a transcript of the speech. Zelensky also urged G20 leaders to use all their power to “make Russia abandon nuclear threats” and called on Moscow to stop bombing Ukraine’s energy infrastructure as winter approaches. “Let Russia prove by its rejection of terror that it is really interested in the restoration of peace,” he said. Moscow has been isolated at this year’s G20 summit as multiple Western leaders vowed not to have any contact with its Foreign Minister Sergey Lavrov, who is in attendance on behalf of Russian President Vladimir Putin.

‘Dancing With the Stars’ judge is leaving the show

This judge receives a 10 for bringing great energy to the show since it began in 2005.

Production for the final season of the popular Netflix series is “full steam ahead” – and the show’s creators hinted at what’s to come.

First of all, you deserve that extra cookie. Seriously, don’t deprive yourself. But if you want tips on sweet alternatives, nutritionists say these foods are great to reach for when you have sugar cravings.

The actress made her first public appearance since sharing her multiple sclerosis diagnosis last year. Read more about her touching speech here.

Jay Leno is recovering from serious burns in a gasoline fire

Leno, an avid car collector, was working on one of his vehicles in his garage when it burst into flames. Here’s what we know about his condition.

The world’s population reached that number today, marking a “milestone in human development,” according to a projection from the UN. The figure means 1 billion people were added to the population in just 12 years. “This unprecedented growth is due to the gradual increase in human lifespan owing to improvements in public health, nutrition, personal hygiene and medicine. It is also the result of high and persistent levels of fertility in some countries,” the UN said.

“No American should ever be discriminated against because of who they love and passing this bill would secure much needed safeguards into federal law.”

– Senate Majority Leader Chuck Schumer, saying on Monday that a vote to codify same-sex marriage will come this week. A bipartisan group of senators that has been working on the legislation to protect marriage equality has the votes needed for the bill to pass and is urging leadership to put it on the floor for a vote as soon as possible, multiple sources told CNN. The first procedural vote should be expected on Wednesday, Schumer said, and will need at least 10 GOP Senate votes to overcome a filibuster and advance toward final passage.

Cold temperatures and snow for parts of the East
02:38 – Source: CNN 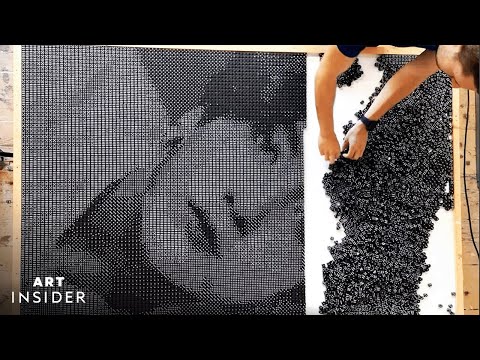 Portraits made from dice