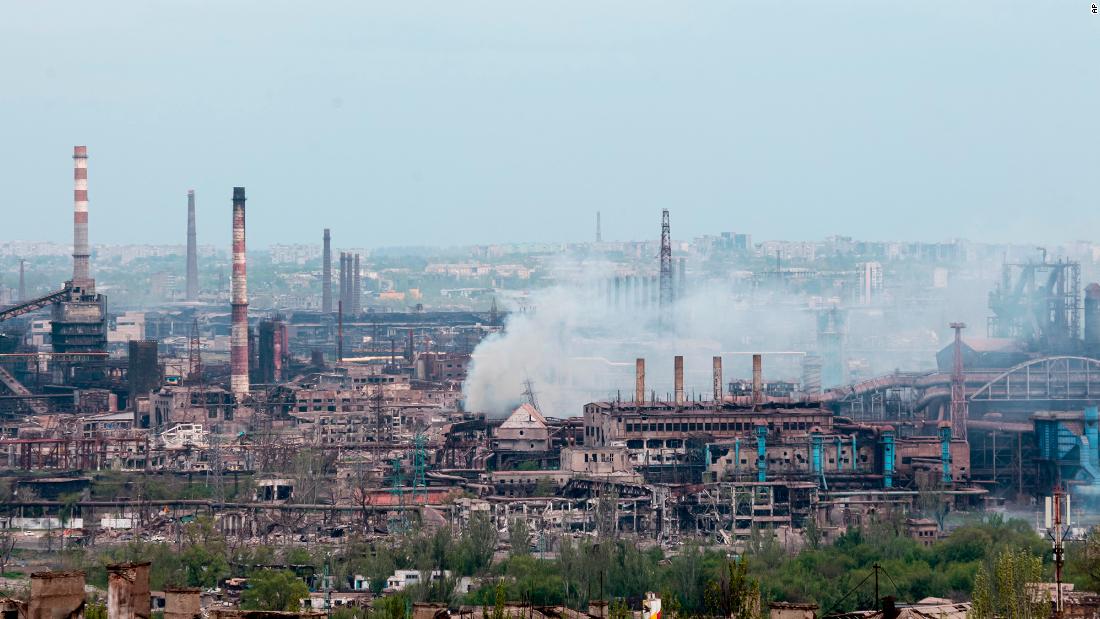 Mother Nature is cooking up a historic heat wave for Mother’s Day weekend. Hot temperatures will bake much of Texas, the Plains and the Midwest tomorrow and into early next week — with some areas feeling like 110 degrees due to the humidity.
Here’s what you need to know to Get Up to Speed and On with Your Day.
(You can get “5 Things You Need to Know Today” delivered to your inbox daily. Sign up here.)

The battle for Mariupol’s Azovstal steel plant is creating a dire situation for civilians as the fierce combat continues. Many people are in urgent need of medical help and food, according to a UN spokesperson. Rescue operations are planned for today with the help of aid organizations, Ukrainian President Volodymyr Zelensky said. However, a Ukrainian commander inside the plant claimed Russians had broken their pledge to allow civilians to leave through the evacuation corridors. The Kremlin, on the other hand, denies that its troops are preventing civilians from leaving. The UN said it’s unclear how many people remain in the plant, while Ukrainian authorities put the number in the hundreds. Separately, sources told CNN the US provided intelligence to Ukraine that helped sink Russia’s prized warship the Moskva in the Black Sea last month. The Pentagon has denied providing Ukraine “specific targeting information” for the Moskva.

Law enforcement officials are bracing for potential violence in Washington, DC, and nationwide in wake of the leaked draft Supreme Court majority opinion that would strike down Roe v. Wade. The US Capitol Police issued an alert yesterday that warned about far-right calls for violence against a religious group planning an upcoming protest in support of abortion rights at the court. In preparation, teams began installing an 8-foot-tall, non-scalable fence around parts of the Supreme Court building Wednesday and set up concrete barriers last night blocking the street in front of the court. Multiple sources told CNN the recent developments may also embolden violent extremists to engage in attacks or other criminal activity targeting abortion clinic staff, patients or clinic facilities.

The FDA has announced that it is putting strict limits on the Johnson & Johnson Covid-19 vaccine. Specifically, the vaccine will be limited to people 18 and older for whom other vaccines aren’t appropriate or accessible. It will also only be administered to those who opt for J&J because they wouldn’t otherwise get vaccinated. The FDA said in a statement that the change is being made because of the risk of a rare and dangerous clotting condition called thrombosis with thrombocytopenia syndrome (TTS) after receiving the vaccine. The new warning comes as the US will likely exceed 1 million coronavirus deaths in the coming weeks, the latest data shows.
If you have a moment, CNN asked people to talk about the items their loved ones lost to Covid left behind. View their stories in this touching interactive piece.

Wildfires and straight-line winds that have ravaged New Mexico for a month have created a major disaster, President Joe Biden declared, unlocking critical federal aid as the state continues to battle the largest wildfire burning in the United States. The move makes federal money available for temporary housing and home repairs, loans to cover property losses and other programs to help residents and business owners recover, the declaration states. The Hermits Peak/Calf Canyon Fire — the biggest US fire this year and the second-largest in New Mexico in at least 30 years — had torched more than 165,000 acres by Thursday, destroyed dozens of homes and could soon threaten 15,000 more, officials have said. Some 300,000 acres have burned this year alone in New Mexico — more than the past two full years combined, according to a CNN analysis.

States at the southern US border are preparing for the expected influx of migrants seeking asylum after the end of Title 42, a pandemic-era border restriction put in place by the Trump administration. The public health order, which the Biden administration hoped to drop this month, previously allowed border officials to turn away approximately 1.8 million migrants in the past two years. In Laredo, Texas, about 5,000 migrants are waiting for the Title 42 to lift, a director of a shelter in the region said. A new CNN poll also shows most Americans say now is not the time to end the Title 42. Forty-three percent of Americans say it’s time to end the border policy and return to pre-pandemic procedures, while 57% say it’s not. But those who say it’s not the right time are divided over how long it should remain in place, the numbers show.

See priest’s reaction when 7-year-old chugs first communion wine
Is it Happy Hour? Check out the funny viral video here.
Avocado prices are soaring and some restaurants are passing their costs onto customers
Yes, we know the guac is extra…
Passenger opens emergency exit and walks on wing of plane at Chicago airport
Another crazy airport story. Can we all just fly in peace?
Nollywood stars turn out for Netflix premiere of ‘Blood Sisters’
People are buzzing about Netflix’s first Nigerian original series. Add it to your binge list!
DoorDash’s business continues to boom two years into the pandemic
Food delivery services are here to stay — even as people are increasingly returning to their lives outside the home.
Widely known as “fashion’s biggest night,” what exclusive party took place in New York City on Monday?
A. The Met Gala
B. The Opera Ball
C. The Bridgerton Gala
D. The Butterfly Ball
Take CNN’s weekly news quiz to see if you’re correct!

That’s how much it costs to have a robot paint your fingernails at Target. Made by a company called Clockwork, robots were added to three Target stores (two in the San Francisco Bay Area, one in Target’s corporate home state of Minnesota), as part of a small-scale test. Customers first book and pay for their appointment online, then stick a hand inside the machine (which looks a lot like a printer) that pipes polish onto the nail, leaving no brush lines. Fingernail painting costs $10 and is meant to take about 10 minutes or less.

“Representation matters and she will give a voice to so many and show what is truly possible when you work hard and dream big.”
— White House press secretary Jen Psaki, on Karine Jean-Pierre taking over her role next week, making her the first Black and out LGBTQ person to hold the position. Jean-Pierre currently serves as the White House’s principal deputy press secretary. Psaki’s departure is unsurprising, given she had been public about her plan to leave after one year on the job. CNN reported in April that Psaki was planning on departing her role at the White House for one at MSNBC.

What It Feels Like to Sleep on the Side of a Mountain
Happy Friday! Remember, sometimes life begins at the end of your comfort zone. If you desire to be more adventurous, maybe you’ll be inspired by these climbers who sleep in hanging tents! (Click here to view)
Facebook
Twitter
Pinterest
LinkedIn
Email