Thinking of traveling to Europe next summer? If so, get ready to pay a fee before you enter. The European Union has announced the launch of its long-awaited visa waiver plan. Under the new system, EU residents are exempt and have the freedom to spend as much time as they want in many countries. But for everyone else entering the bloc from the US or other countries which didn’t previously require a visa, it will cost about $7.35.

Here’s what you need to know to Get Up to Speed and On with Your Day.

The Senate on Thursday passed a bipartisan bill to address gun violence that amounts to the first major federal gun safety legislation in decades. The vote was 65 to 33 with 15 Republicans joining Democrats in support of the measure. The bill now goes to the House for a vote before it can be sent to President Joe Biden to be signed into law. The measure includes millions of dollars for mental health, school safety, crisis intervention programs and incentives for states to bolster juvenile records systems. It also makes significant changes to the process for people ages 18 to 21 to buy a firearm and closes the so-called boyfriend loophole. The package, however, does not include an assault weapons ban that Democrats were seeking. Separately, hours before the Senate vote, the Supreme Court struck down a New York gun law that places restrictions on carrying a concealed handgun outside the home – an opinion marking the widest expansion of gun rights in a decade.

The January 6 select committee’s hearing on Thursday shed new light on the role that former President Donald Trump’s Republican allies in Congress played in furthering his efforts to try to overturn the election – and how many of them sought pardons after the attack on the US Capitol. The hearing also brought to light a high-stakes Oval Office meeting in December 2020, where Trump considered firing the acting attorney general and installing Justice Department official Jeffrey Clark, who was willing to use the powers of federal law enforcement to encourage state lawmakers to overturn Trump’s loss. The day before the hearing, federal investigators searched Clark’s home, although it’s not clear what investigators were seeking. Clark has denied any wrongdoing related to January 6.

03:15 – Source: CNN
New documentary footage reveals Pence reacting to a resolution calling for him to invoke 25th amendment to remove Trump from power

Long Covid – a condition marked by lingering Covid-19 symptoms – can affect children of all ages, including infants, a new study shows. The CDC defines long Covid as health problems that last four or more weeks after a Covid-19 infection. According to the study, common symptoms of long Covid varied by age. For children up to 3, it was mood swings, rashes and stomach aches. Children 4 to 11 years old also experienced memory and concentration problems. For 12- to 14-year-olds, it was memory and concentration issues, mood swings and fatigue.

Ukrainian forces will soon have to withdraw from the embattled city of Severodonetsk, a regional official said today, accusing Russia of destroying most of its infrastructure during months of intense shelling. “All the infrastructure of the city is completely destroyed. More than 90% of houses were fired on, about 80% of houses were critically destroyed,” said Serhiy Hayday, the head of the Luhansk regional military administration. Ukraine also faces a difficult winter ahead as Russia continues to reduce energy supplies to members of the European Union. Additionally, thousands of Ukrainians killed in the war remain unidentified. Police, soldiers, investigators, morticians and forensic experts – desperate to return remains to loved ones – are working tirelessly to find out who they are, so their bodies can be laid properly to rest.

The Biden administration has agreed to cancel an estimated $6 billion in federal student loan debt for borrowers who have claimed they were defrauded by their college. The administration had previously approved $25 billion in loan forgiveness for 1.3 million borrowers. Many of the borrowers affected by the new agreement have been waiting years for the Department of Education to process their claims under a rule known as borrower defense to repayment. It allows borrowers who believe they were misled by their college, often over inflated job placement rates or the ability to transfer credits, to request federal student loan relief. Biden also announced in April he is considering broader student loan forgiveness for the 43 million Americans who have federal student loan debt, after facing months of pressure from Democrats to cancel $50,000 per borrower.

02:52 – Source: CNN
‘They come to find you’: College graduate on harassment from student loan debt collectors

Drinks after work probably seemed like a good idea… but now his job may be on the rocks.

Ohio State University wins trademark for the word ‘THE’

Say it with emphasis: *THE* Ohio State University. To the masses, it’s just a simple word. But to Buckeye fans, it’s a beloved tradition.

This wordless comedian is now the most-followed person on TikTok

Meet the 22-year-old TikTok star with facial expressions that say a thousand words.

The Queen has a new hairstyle for the summer

Serena Williams returns to tennis after a year out

After suffering a serious leg injury, the tennis icon marked her return to the court after a yearlong absence with an exciting victory!

If you’d like to be inspired by another incredible tennis legend, check out the new CNN film “Citizen Ashe” premiering this Sunday at 9 p.m. ET/PT on CNN. The film explores the enduring legacy of Arthur Ashe, the only Black man to win singles titles at the Australian Open, Wimbledon and the US Open. In addition to being one of the greatest American tennis players of all time, Ashe was also a social activist, role model and advocate for HIV/AIDS awareness after revealing his own diagnosis to the public in 1992.

Which NFL star announced his retirement this week?

That’s how many men were convicted by a Paris court Thursday for stealing a Banksy artwork from the Bataclan concert hall, one of the sites of the November 2015 Paris terror attacks. Banksy – the anonymous street artist – painted the artwork known as the “sad girl” on the exit door of the Bataclan in homage of the 90 concertgoers who were killed when ISIS attackers opened fire during a performance at the hall. The convicted art thieves had stolen the door in 2019 and shipped it to Italy, where investigators later found it at a farm. The eight men have been sentenced to a maximum of two years in prison.

“The management of this theater discovered after booking ‘Lightyear’ that there is a same-sex kissing scene within the first 30 minutes of the Pixar movie. We will do all we can to fast forward through that scene, but it might not be exact.”

– A sign posted at a movie theater in Oklahoma, warning about a same-sex kiss in the new Disney/Pixar film “Lightyear.” The notice outside of the 89er Theater in Kingfisher cautioned parents about a scene that depicts two female characters sharing a brief kiss. After the sign stirred widespread debate online and in the community, the owners of the theater told CNN that the notice was removed and that the scene had not been censored in any showings. Several countries, including Malaysia, Saudi Arabia and the United Arab Emirates, have banned “Lightyear” from theaters over its inclusion of the same-sex kiss.

03:09 – Source: CNN
Heat continues to dominate the Southeast while severe storms are possible for the Plains 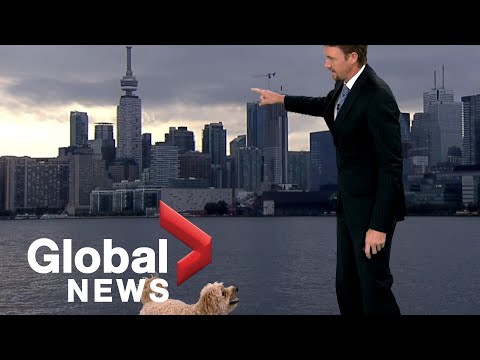 Today is National Take Your Dog to Work Day

For some during the pandemic, working from home means pets are always nearby 24/7! Watch this adorable dog interrupt his hooman live on air during a weather broadcast. (Click here to view)