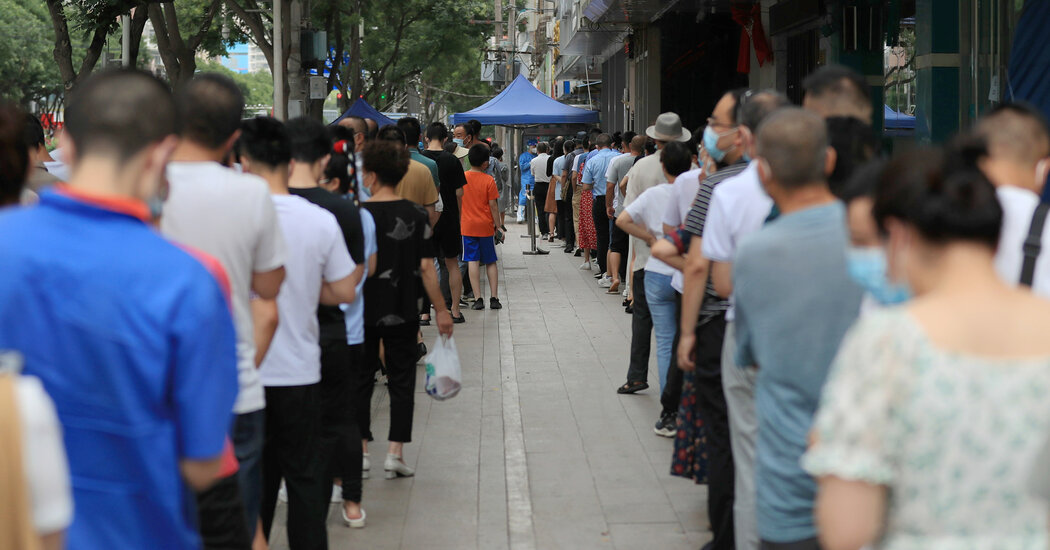 When the boy’s father asked for help getting his son to the hospital, he was told to put on a mask. Local officials promised to “learn from this painful lesson.”

A 3-year-old boy in the Chinese city of Lanzhou died of carbon monoxide poisoning this week after coronavirus restrictions kept him from being taken promptly to a hospital, the latest tragedy to renew public scrutiny of China’s “zero Covid” policy and its costs.

The boy’s father dialed the city’s emergency hotline four times in three minutes on Tuesday but did not get through until the last time, according to a report issued by local officials on Thursday night. On his fourth try, the dispatcher told him that because he lived in an area considered “high risk” for the virus, he could seek only online medical counseling.

The father then sought help from officials in his neighborhood, but several instead reprimanded him for not wearing a mask, the report said. Nearly two hours after he first dialed for help, he finally got his son to a hospital — less than a 10-minute drive from their home. The boy, Tuo Wenxuan, died soon after they arrived.

Lanzhou, a city of more than three million in northwestern Gansu province, had recorded 51 new infections that day.

The incident came to light when a video of the boy receiving CPR circulated on social media. After a widespread outcry, the district health authorities published their report. They pledged to “deeply learn from this painful lesson” and said officials who had failed in their duties would be “handled seriously.”

But the boy’s father, Tuo Shilei, said he took no comfort in that promise.

“This supposed handling won’t happen. I know that. It’s pretty much just for show,” Mr. Tuo, a restaurant owner, said in an exchange of messages. He said his son “hasn’t received a true public accounting, and the public that has cared for and supported us throughout this entire process has not received a convincing, acceptable, open, just outcome.”

He also suggested that he had been warned against pressing for further accountability.

“The relatives who’ve suffered have been subject to endless public discussion and pressure from all kinds of unknown sources, and we have no choice but to temporarily compromise,” Mr. Tuo said. “Other than this, there has been no consolation.”

China’s zero-Covid policy, now in its third year, seeks to eliminate infections through stringent, often repressive, controls on movement and personal freedom. Beijing has said it is meant to save as many lives as possible, while arguing that loose controls in other countries, especially Western ones, had led to millions of deaths.

The controls have kept China’s infection and death rates much lower than those elsewhere, and they enjoy significant public support. But they have also sometimes cut off people’s access to essentials like food and medical care — a trade-off that some see as increasingly unjustifiable as the danger from the virus itself ebbs. Sometimes, the controls appear to have indirectly led to deaths themselves.

In September, a bus crashed while taking dozens of people to a quarantine facility in the middle of the night, killing 27; many social media users suggested that a rush to send people to isolation was to blame. Pregnant women have miscarried, and a nurse in Shanghai died of an asthma attack, after being refused care under Covid protocols.

But the central government has doubled down on zero Covid, with China’s leader, Xi Jinping, declaring the strategy a success as he claimed a third term last month. Internet censors quickly scrub public discussion of deaths connected to the restrictions, or try to limit it to an official narrative.

Such censorship appears to have been applied in the case of Mr. Tuo’s son.

After Mr. Tuo published a blog post on Wednesday demanding an official explanation for the boy’s death, it was read more than 25 million times in seven hours. He wrote that he had first noticed around noon on Tuesday that his wife seemed unwell and after checking on her, saw that his son was unconscious. (The police later said that “improper use” of a liquefied gas stove had caused a carbon monoxide leak.)

When Mr. Tuo’s emergency calls failed, he went outside and asked officials at a checkpoint — the area had been sealed off because of the virus — for help. They refused, he wrote.

Finally, carrying his son, he tore down some of the fencing that had been put up around his neighborhood, and with the help of another person was able to flag down a taxi. By the time they arrived at the hospital, it was too late.

“If my son had been sent to the hospital earlier, he might have still been saved,” Mr. Tuo wrote. He added that someone claiming to be from a nongovernmental organization had offered him 100,000 renminbi, or about $14,000, if he agreed not to hold local officials responsible.

As public pressure mounted, Lanzhou officials told a state-owned newspaper that they would investigate. But Mr. Tuo’s blog post was deleted.

He later posted on a private social media page that the situation had been addressed but that he could not disclose details. Mr. Tuo, who is a member of the Dongxiang ethnic minority, wrote that he had accepted the outcome only because of his Muslim faith.

When the district government released its report on Thursday night, it quickly became a top trending topic on Weibo, a major social media platform. A related hashtag has been viewed more than 420 million times.

Many social media users said the official account should have specified who would be punished and how the government would ensure that similar incidents did not occur.

The district government’s report did not include an outright apology. It said only that officials would “constantly improve their work methods” and that they “sincerely accepted the criticism” of the public.

Other commenters defended the officials involved. Hu Xijin, the retired editor of the state-owned tabloid Global Times, wrote in a social media post that the public should not call for penalties for workers who were merely doing their jobs. He also dismissed the idea that the authorities who designed China’s Covid policies were responsible for the boy’s death, arguing that the policies were for the good of the people.

A significant number of commenters also blamed Mr. Tuo for missing follow-up calls from a hospital that the emergency dispatcher had contacted to arrange online consultation.

The clearest sign that public anger about the boy’s death would not be tolerated may have come on the night he died. When a number of Mr. Tuo’s neighbors, including his brother, gathered at one of the local checkpoints to demand an explanation, they were met by armed police officers, who arrested several people, Mr. Tuo said.

Reached by telephone, police officials at both the Lanzhou police headquarters and the district where Mr. Tuo lives said they had no information to share about that.