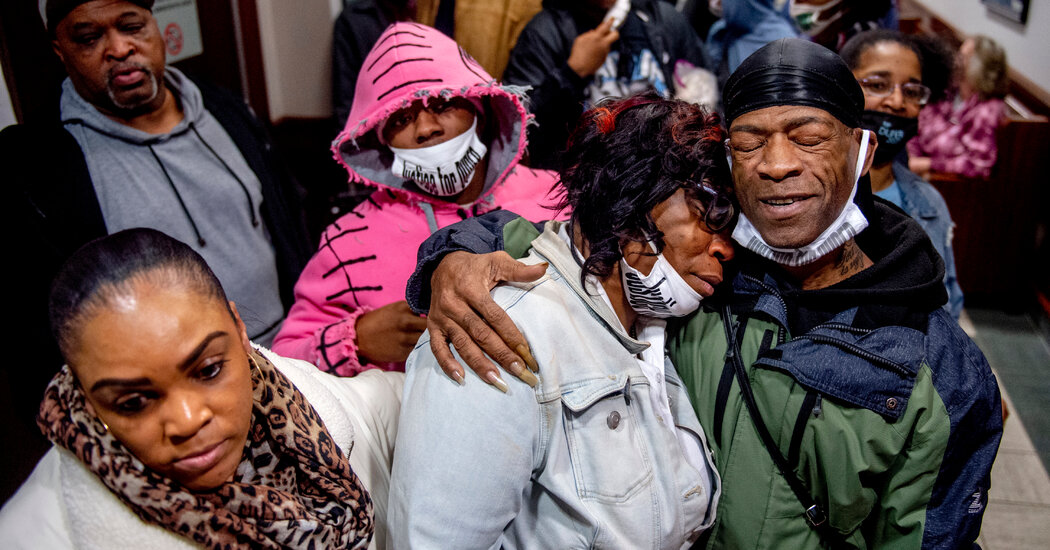 The three people were sentenced to life in prison without parole in the fatal shooting of a Flint, Mich., security guard in 2020.

Three family members were sentenced this week to life in prison without parole in the fatal shooting in 2020 of a security guard at a Family Dollar store in Flint, Mich., over a dispute regarding mask requirements at the store, court records show.

According to prosecutors, the confrontation that led to the shooting unfolded on May 1, 2020, after the guard, Calvin Munerlyn, 43, told a customer, Sharmel Teague, that her daughter needed to wear a mask inside the store, just north of downtown Flint.

Mr. Teague later arrived at the store with his stepson, Ramonyea T. Bishop, who shot Mr. Munerlyn in the back of the head, according to prosecutors. When police responded to the store, they found Mr. Munerlyn unconscious on the floor and bleeding, prosecutors said. Mr. Munerlyn was transported to a nearby hospital, where he was pronounced dead.

The couple, Mr. Teague and Ms. Teague, both 47, and Ms. Teague’s son, Mr. Bishop, 26, who were convicted of first-degree murder in November, were sentenced Tuesday in the 7th Judicial Circuit Court in Genesee County.

A sister of Mr. Bishop, Brya S. Bishop, 27, was sentenced in November to a year of probation and time served for tampering with evidence, lying to police and being an accessory after the fact to a felony, court records show.

The sentencing concluded a case that began more than two years ago in the early months of the coronavirus pandemic — a period when scarce information about the virus and its spread led to rampant fear and anger among the public. Often, that anger was misdirected at shop clerks, managers and hospitality workers, who were suddenly tasked with enforcing ever-shifting preventive rules, around mask-wearing in particular.

In May, a woman who punched a flight attendant in the face was sentenced to 15 months in a federal prison. In 2021, an Iowa man was sentenced to 10 years in prison for assaulting and spitting on a man who had asked him to wear his mask above his nose. In 2020, an 80-year-old who asked a fellow bar patron to wear a mask was shoved to the ground, and later died from his injury.

In the case of Mr. Munerlyn, the argument between himself and Ms. Teague appeared to escalate after she spat on him, according to surveillance footage from the store, The Flint Journal reported.

Mr. Munerlyn chased Ms. Teague into the parking lot, where he tackled her to the ground, The Journal reported, adding that about 20 minutes later, Mr. Bishop and Mr. Teague returned to the Family Dollar, where Mr. Bishop shot Mr. Munerlyn in the back of the head.

Efforts on Thursday to reach Genesee County prosecutors and lawyers for the defendants were not immediately successful.